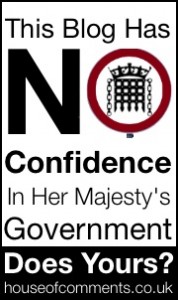 (Una )Musings has an excellent piece on the Contact Point database, Labour’s Orwellian plan to regulate every aspect of the way in which a child  is raised, including chilling statements such as ‘refusal to take appropriate medicine’ – who is to decided what is appropriate, and for what ailment are they being medicated?; surely not the ‘appropriateness of social and communications skills, for example, ‘body language, excessive use of expletives or inappropriate language, for example brusque manner’. Nobody mention the Gollywog……..!

I was particularly struck by her comment that this initiative had come into being via Statutory Instrument, rather than being exposed to the, albeit somewhat toothless these days, scrutiny of Parliament. NuLabour are remarkably reluctant to engage in debate with their ‘stakeholders’ whilst socially engineering their lives, and even when they do, it is by way of obscure phrases that appear to hold out promise of ‘something better’ whilst concealing a cyanide pill.

Another piece of legislation which has been passed, the true meaning of which has apparently escaped the main stream media, is The Mental Capacity Act 2005.  This was billed at the time as ‘extending autonomy by proxy’ – surely the ultimate oxymoron – your ‘self-government’ is yours alone, once in someone else’s hands it is no longer yours. No matter, it passed through parliament with some minor squeaks on the question of whether this was ushering in euthanasia via the backdoor – absolutely not we were assured; it was, were were told, a way of ensuring that at the end of your days, you and you alone could decide on your medical treatment, you could even ensure that if you were unable to speak up for yourself, a trusted friend or relative ‘could’ express your wishes on your behalf.

Note that little word ‘could’. It was never spelt out that if you didn’t formally – at a cost of some £500 – set up this arrangement in advance, then an anonymous government department could, and would, take control of your ‘proxy autonomy’ for you. A civil servant will be appointed as your case officer and oversee your medical treatment. So, granting your proxy autonomy has already become an ‘opt-in’ arrangement, fail to have the foresight today, now, to do so, or fail to find the £500, and you too will have a civil servant who never has nor ever will meet you, decide on your medical treatment.

Nor is this simply a matter of not wanting any further intrusive operations when you have a terminal illness. UK law says that food and water when administered by a Doctor is medical treatment…….so just in case you might have wanted to ensure that in your final days you wouldn’t want any food or water, the Act helpfully ensures that it is a criminal offence to fail to obey the decision that the government made on your behalf.

We do not have the right to euthanasia in this country, those who fear that the end of their life may be too intolerable for them or their families to bear must travel abroad amid a welter of bureaucracy and the fear of prosecution in order to find eternal peace. What we do have is the right of the less-than-transparent Court of Protection to decided that since you didn’t nominate a family member to do so, they can order a Doctor to  supervise your inhuman death by starvation and dehydration.

NuLabour’s Orwellian control is complete, the CAF will supervise every moment of your birth and childhood, every aspect of your life will be scrutinised, logged, and controlled, and when you fail to be economically productive, then the Court of Protection can order your early dispatch from this mortal coil.

Chilling is it not?

Oh Saul! Where is the best place to escape to? I am willing to go back in
time if that’s any help!

Take a look at the lawman beating up the wrong guy…….

Gloria Smudd! Are you still there? I am thinking about posting all my crazy
copper capers on Youtube tnight ……………. Before they can put me in prison for
it!

Help me make my decision! I hope they can’t do retrospectives!!!

Playing cards is one of the greatest anti-dotes to dementia. It makes one’s
mind think on many different levels. So good for your Maman!

Hugs and kisses and lots of love to all of us ……… as we struggle on in
these beleagured times!

And bisous for everyone.
Maman wants to play cards

Oh Chatelaine ………… This has given me hope! May I become Dutch if everything
becomes too much for me then? The thing is ………. sometimes things get on top of
me and I cannot see an end to it. The UK will probably never agree to assisted
or non-assisisted suicide because of all the insurance problems involved ie.
Paying mortgages and debts off.

I believe God already has a huge mansion waiting in the sky for me! So I am
more or less ready at any time ………… So long as I can find somebody who can
adopt my nine cats – Who must not be split up under any circumstances.

Maman insists, made us promise that we would “put her down” whenever
dementia would settle in with her. She’s Dutch and we can keep that promise

I think it is a very thought-provoking thread. I suspect that people can’t
quite believe it is possible for one’s autonomy to be seized in this way.
Thanks for getting the subject ‘out there’.

We do not have the right to euthanasia in this country, those who fear that
the end of their life may be too intolerable for them or their families to
bear must travel abroad amid a welter of bureaucracy and the fear of
prosecution in order to find eternal peace.
……………..
I believe that
travelling abroad to end one’s life is actually ‘assisted suicide’ rather than
euthanasia – I think this is a very important distinction.

You are absolutely right Gloria, it is an important distinction.
There
was an awful lot more I could have said in that post, and I was aware that I
was oversimplifying the matter – but equally aware that most peoples eyes
glaze over when asked to contemplate their own death, or that of others
close to them.
I consider it a result to have even persuaded a few people
to think on the subject, so I didn’t want to put them off by going into too
much detail.

Oh deary me ………….. Dissent from the upper echelons last night. Ex-MI5
Stella has shown her disgruntlement at the Government’s idea of saving all our
telephone conversations and emails etc.

She reckons that the Government is trying to instil us all with fear about
terrorism and to continue eroding our civil liberties.

I am pleasantly surprised that this writer of thrillers felt the need to
speak out about this madness ………… and I am just wondering if this just the
beginning of the Establishment kicking back at Labour?

She’s no fool, she gave the interview to a Spanish newspaper, La
Vanguardia.
She’s obviously well aware of the control Nulabour exercise
over the British papers.

At a time when a BBC soap opera is running a story line before the
watershed which barely questions the morality of a single mother having no
idea who the father of one of her multi-coloured brood might be, and the
morality of two children who have in turn just produced a baby is only
discussed in terms of whether it is right that Sun has bought the exclusive to
their life story, short though it necessarily will be, it is safe to assume
that NuLabour wishes us to rut with whomever, whenever, however, and produce
as many future closely controlled stakeholders for them as possible.

But our matching is still safe – except in the case of near relatives – and
we don’t have to have a blood test. Oops, I hope I haven’t given Gordie and
his merry band an idea.