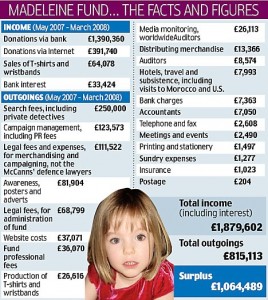 Mr Clarence Mitchell said: ‘People will be able to see that every penny of the money they so generously donated has been spent properly in the hunt to find Madeleine.’

I would suggest, Mr Mitchell, that the publication by Companies House last night of the accounts for the private company (limited by guarantee) ‘Leaving No Stone Unturned’, often misleadingly referred to simply as ‘the fund’, a term more commonly applied to a Registered Charity, will have an entirely different effect.

Less than a third of the Audited monies have been spent on directly searching for Madeleine. ‘Search fees’ of £250,000 out of the ‘£2 million’ figure quoted in the Daily Mail’s banner headline is not  a figure that will impress the most numerically challenged reader, far less the army of ‘widows and orphans’ who raised this sum in order to ‘Help Find Madeleine’ as they were exhorted to do in a series of emotional appeals.

The remaining two thirds of the monies are accounted for under a series of headings that could be paraphrased as ‘protecting Madeleine’s (and by extension the McCann’s) image and reputation’  and ‘providing for the needs of those entitled to draw from the fund’ – the lawyers, the friends and family who act as Directors.

And with Mr McCann, the family’s main earner, on unpaid leave from his job as consultant cardiologist, part of the Fund has been used to meet their living costs.
Esther McVey, then acting as a Director of the fund, said “I haven’t got the exact figure but it is just under £300,000,”

The living expenses of a highly paid professional couple was hardly uppermost in the minds of those who scrapped together their pennies to ‘Help Find Madeleine’. Nor were legal expenses of just under £200,000 to ensure that Madeleine’s image and intellectual property rights remained under the control of the fund.

Web site costs of £37,071 is another figure which has left many aghast. Was the web site sued for libel? I cannot fathom any other reason why this figure should be so astronomical. The web site was set up by a  pupil of a family member – surely acting in an unpaid capacity, it is unthinkable that a relative should wish to profit from this sad saga. As each and every blogger who has written extensively on Madeleine knows, it costs peanuts in financial terms to set up and run a web site. The vast 3Arguidos web site which is accessed daily by thousands of members to keep up to date with the ‘McCann news’ quotes a figure of £1,597.44 as the ongoing costs to date of hosting a busy web site.

One of the most interesting figures is the £26,113 paid for ‘media monitoring’. Quite how this helps to search for Madeleine is hard to understand. Did someone suspect that Madeleine would put a small advert in an obscure classified column somewhere ‘Here I am, please release me’……. in which case monitoring for such an appearance is emphatically an example of Mr Mitchell’s ‘every penny […] spent properly’. Though given Gordon Brown’s involvement in this matter, and that of his wife’s association with Julia Hobshawn’s ‘Media Monitoring’ company, the suspicion must remain that the monitoring was not for word from Madeleine herself, nor from anyone who preferred writing to a newspaper to the more efficacious method of dialling 999 as a means of transmitting news of her whereabouts, but that this item may indeed be for payment to the army of ‘posters’ who have appeared on every web site determinedly pushing the use of the word ‘Abduction’ in preference to ‘Missing’ or Vanished’ or ‘Lost’. Incidentally, should the £81,904 spent on ‘posters’ be added to this section or to the merchandising and and campaigning section? Posters is a misleading term. If that is so, it has been a wasted £26,000 for I can think of no ‘News outlet’ that is not under the control of the McCann’s that still uses the word ‘Abduction’. Can you?

We must remember that these are the accounts for an initial  ten month period – further accounts will reflect the massive libel payouts made last year and further donations.

The law should be changed so that in future, a truly independent body oversees any donations made in respect of a sick or missing child. Not merely the Charity Commission overseeing the accounts (although that would have been a welcome and advantageous intervention in this case), but a truly independent body overseeing what the donations are spent on. Two European police forces were involved in the search for Madeleine, there was no initial reason for the family to have access to these vast sums. Where a child receives compensation as a result of personal injuries, the money is never handed to the parents, it is held by the High Court and expenditure scrutinised at every stage – before and after it is spent. The law should be changed to encompass situations such as this, where well meaning and hard working families donate money to aid any child in difficulties.

It should not be spent at the discretion of a family whose ‘common sense’ is at the mercy of their emotions.

So. The Curse of Smudd strikes once more. Where once there was keen web
interaction and fun and frolics and even sardines for goodness sake, now there
is just an empty bandwidth, a creaky saloon door swinging on its hinges in the
early hours as the moonlit tumbleweed teases its aimless way down the deserted
street outside. OK, Carol, I get the hint.

Were’nt the Amphibious Six-Foot Sardines all gobbled up by Bouffant-Boris
the Pedalling-Persian as soon as they crossed into the Congestion Charge Zone?
You see that big ‘C’ on the roads? That stands for CATS, that does…

It was definitely not my Amphibious Six-Foot Sardines

They
came to my house and told me it wasn’t them if you remember!

I am still going with my cadaver-scented Aliens From Outer Space with
Fairy-dust Theory. ……………… The FairyDust that they sprinkled into the
children’s eyes to stop them from waking up ………………

Your time will come

It fired my imagination

–
Which inspired my Alien Abduction Theory! I still cannot believe that Trevor
McDonald of ITV hasn’t asked to interview me yet …………….

Well, this kitten is going to her basket. Good night, dear Coco.

Dangerous, these new computer skills, Coco. You might get even more
addicted to the medium.
But then: you might start making money on “Media
Monitoring” [one smiley:

And the intellectual bit.

Chatelaine ………. It may be the over-use of smilies! I will check you are not
in the spammer ……….

……. with my newly-found computer-skills – thanks to anna raccoon.

So I said [wooshed]
something like: yes we we would be scared, but … we
aren’t a McCann, are we?

As to poised, elegant, psychic, shrewd, intuitive
I only miss the
passionate and intelligent

I am so pleased that the Germans have bought that series off UK …………. I
wish they would do a remake for the younger generation ………… with here and now
tv stars ……….

My texts go into oblivion …

You should be
Count your blessings
We’re not a McCann
[we
aren’t..]

Beg your pardon, Coco. What … are you referring to

Couldn’t get myself in then!

Hi Guys! Are there any Kittens not in their baskets yet?

But the most relevant question I’ve found so far is, of course:
Why
didn’t they spent it ALL in the first 10 months???????
As time passes by
the chances of finding her [in the hypothesis of abduction] are quickly
decreasing. Why SAVE UP money for “later” and build reserves [like a company
would do]? It suggests again that they actually never thought they would find
her …

They must be conserving a war chest for the ‘wider agenda’
Chatelaine!

yes, I bet these accounts will be scrutinized; that’s probably why they
filed them so late …

I can’t see the ‘just under

Aye. That might have looked a little ‘unbalanced’, perhaps?

I wonder whether the dizzy costs, including the legal costs, relating to
merchandising, distribution, production, campaign management etc. are
connected to the initial establishment of the ‘fund’, something of a ‘one-off’
and not likely to be repeated again in the next financial year, thus leaving a
much greater proportion of any remaining funds to be spent on the search. What
do you think?

Indeed to Goodness Ms Smudd!
They must have been glad that the Express
cheque came in so late, the supposition is that it is included in the Debtors
figure……if it hadn’t been then the accounts would have reflected

There are some very surprising figures in the Mail’s itemised breakdown,
not just the astronomical website costs : the ‘campaign’ and its management,
distribution, merchandising, ‘posters’,
‘awareness’ etc., all costing
interesting amounts, not to mention the ‘fund professional fees’. I wouldn’t
be surprised if these accounts are being heatedly discussed and examined in
one or two other websites this very minute….

SteveT – I’ve always thought the money would be a problem to them – too
many people saying ‘follow the money’.

Have you got a link for that Daily Express

And the Daily Express are saying that their

I suppose there’s now enough left in the fund for them to hire a
Baby-sitter the next time they dine out.

Pensive,
Depends whether they are dining at night or during the day –
apparently they don’t like leaving the children with strangers at night –
even if they are the same strangers they leave them with during the day.

Who do you believe Mothra? Sky News or the McCann’s own account lodged
with Companies House?

What about the plain brown envelopes that went to Rothley Towers.
The
Pub Quiz in Liverpool.
What about the book deals Calrence said he was
doing.

Presumably the ‘brown envelopes’ went directly to the McCann’s since
there was no ‘Madeleine Fund’ at that time, so would not have needed to be
entered in the accounts of ‘No Stone Unturned’.