And before the pedants point it out – it was actually about 200 miles East of the Kwai. I wasn’t going to waste the headline though!

In Pattaya, that den of iniquity, the denizens of antiquity were quietly amusing themselves, unaware that the Thai police were planning a major crackdown on crime.

Particularly crime committed by that disreputable lot known as ‘Foreigners’.

Since seizing power in 2014, Thailand’s leader, General Prayuth Chan-ocha, has vowed to crack down on a raft of social ills, including corruption and criminal networks, both foreign and domestic.

Pattaya has a wide array of crime to choose from. Mostly sex crimes; paedophilia, sexual enslavement, prostitution (still illegal in Thailand despite its reputation). So when the Thai police got a call from the resident of a first floor apartment that a group of foreigners were meeting on a regular basis for nefarious deeds and money was changing hands, they girded their loins and amassed a serious force to deal with the problem.Â 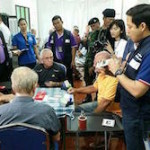 Thus 50 army veterans and policemen donned bullet proof vests, drew their arms, and crashed through the front door of the apartment on the second floor.

There they found 32 elderly ex-pats; British Dutch, American; sitting round eight tables…..plotting their next contract….

Local police, soldiers and Bang Lamung district officials raided a Jomtien & Pattaya Bridge Club meeting above Alto’s restaurant off Thappraya Road in the resort city on Wednesday, taking into custody 32 people, mostly European nationals, and holding them until 3am.

Pattaya police chief Sukthat Pumpunmuang told AFP Thursday the raid was sparked by a member of the public complaining to the government’s anti-corruption centre. It was initiated by district officials, local media said, not by Pattaya police.

They arrested the lot of them, now all bailed in the princely sum of 100 quid each, even though no money was changing hands – for having recovered from their embarrassment at not ‘busting’ an Al Qaeda cell, they consulted their ruleÂ books and discovered that it is against the law in Thailand to have more than 120 playing cards present in one room….

While they found no financial evidence of gambling, police charged the group with possessing more than 120 playing cards that were not produced by the Excise Department, in violation of Section 8 of the Playing Cards Act of 1943.

Proving that it’s not just the British police force that has taken leave of its senses.

Talk amongst yourselves, I’m off to the damn hospital for the day.

Fantastic. It’s like an out take from the new Dads Army Film!!
Good luck at the hospital.

Well, if weâre going to be accused of pedantry, Iâd like to point out that, cet. par., one would expect there to be 832 cards in use by a school of 32: two decks at each of eight tables.

P.S. As Jim said, all the best at the sick bay.

Only 416 cards playing. Though I accept there will have been 832 in the room, on the table, even. But only 416 playing…I can do pedantry too.
Kind regards,
“Raccoon not left premises yet”.

O.K. I was basing my particular pedantry on the fact that this rather strange law concerned the possession, rather than use, of the 120 cards. Perhaps one is to infer that the cards in question had not gone through the process of excise and stamping.

Given that the players were British, they were probably using British cards – most ex-pats do. I could always win at Gin Rummy if I used French cards playing the English – does their head in!!!!

If the cards had been French, you could have written ‘Sur le Pont, de Bang Lamung’

And, as ever, the historic source of current Far East cops’ populist media panics are the profiteering phoney Anglophone US/UK/Oz etc.

Meanwhile if you can’t find a good partner (for Bridge), then get a good hand!

Did the post-WW2 troops sexually exploit the local girls? Were the R&Ring troops financially exploited? Or was it a simple exchange of services for money, to the benefit of all concerned?

Extend Alex, “Post-WW2/Rest & Relaxing Anglophone troops variously exploited/amused/abused, local girls (or boys) including under age girls, and some later even married. No more nor less than R&R troops exploiting and exploited/some ripped off since time immemorial. The difference in today’s PC/Puritan Cowardice Anglophone is there are now no nuances – only Nonces! So, not all bad then – like revered Renaissance genius da Vinci, or Rock God Presley?”

One suspects that the usual niceties have not been observed.

Hope all goes well at the hospital visit. Am so pleased to see you back! (Only discovered that accidentally yesterday, and just had to binge-read thru’ all the back articles….)

a similar experience was had by my son who, when en route home from Australia a few years back called in to visit my cousin who ran an ‘open microphone’ rock and roll bar in Chiang Mai. One night, when invited to sit in on the drums, the police raided the place and arrested all and sundry for ‘illegal employment’ of foreigners and it wasn’t until money had changed hands that he was released. needless to say he’s less than keen on returning.

The best of best good fortune with your appointment Anna.
Having been to Sin City as Pattaya was and may still be known (accompanied by my wife I will have you know) it is almost certainly the most unbelievably ‘in your face’ debauched town (Bangkok actually is not) I have visited and one can only guess what goes on behind closed doors but one might wish it was nothing more sinister than a round of cards

That Ms Raccoon is a big big win

O/T but your email on the home page doesn’t work.
It seems that the knives are out for Horgan-Howe

And quite right too!

Det. Corporal Bernard Hogan Howe is the best example since Det. Corporal Peter Fahy of the decline in the calibre of chief officers of police in an earlier thread. But, there again, the British Army being down to two battalions and the Royal Navy to a few frigates (some risibly called destroyers), whence some real police leaders for to-day?

I’m reminded of the Steamstresses Guild in Terry Pratchett’s Discworld novels, which was a cover. Maybe the Thai Fuzz imagined that a Bridge Club was an improbable organisation. We should not be surprised: the Brits are a funny lot. After all, who would believe that a political party named ‘The Labour Party’ should be a cover for monstrous fuckwittery, or one called “The Conservative Party” should be a cover for venal tosspottery?

Or that the Liberal Democrats would not be liberal nor democratic.

It’d quite difficult for foreigners- ‘farangs’ – to really understand popular Thai culture. The Land of Smiles basically applies a vacuum pump to your wallet the minute you alight from a plane and from then on it’s matter of how little you can get away with paying.

What we call bribery is deemed something else in Thailand. I often travel with a good pal, a Thai undercover cop and we get stopped at road blocks to be ‘fined’ $2 by the local plod for some perceived transgression. But Heaven help those local cops if they encroach on another forces territory. This is viewed as police legitimately subsidizing low wages and they are expected to draw a fine line between driving the tourist trade batty and ensuring those fined are done so in a civil and ‘smiling’ manner.

Pattaya is where all these odd elements come crashing together as the most popular Asian resort. You can meet and sit down with the local cop commander and seriously discuss the shocking fact farangs visit Go Go Bars which are just glitzy bordellos. The same copper will either own that bar or be collecting some of the profits for a Widows & Orphans Charity (his own).

All this is overseen by Thai generals who really run the country. When there is a coup Thais eagerly watch the TV to see which Thai general will be offered a scarf by their highly revered King. The one that does, then runs the show. as he is seen as Top Dog. To the left of Pattaya on a hillside is littered a series of magnificent holiday villas with their own beach. They belong to the various generals.

When in trouble one is expected to go to the local Tourist Police which is mainly made up of retired foreigners, possible some of the honest bridge players but often you will find a many times convicted German criminal. The basic advice they give is which Girly (or Boy)Bar has been deemed such a rip-off joint that week, it should be avoided. But it usually means they also receive a small payment from the bar they direct you to- merely to help with expenses in their unpaid honorary capacity of course.

The Thai belief is that whatever happens to you, it’s your fault by being in Thailand. This is Buddhist logic that can’t really be argued against. Thus those in the know always carry a certain sum, say $150 which can be used to quickly extract yourself from trouble with locals or police alike such as the Bridge Club raid. Possibly the older farangs there insisted on some legal nicety technicality which necessitated taking the whole lot to the local station rather than just paying up a fine there and then.