E’en the grateful thanks of the nation ringing in your ears! That is surely good news for the millionaires currently marching in support of austerity or summit?

‘Tis true, you don’t have to part with a penny. Anyone can do it.

Wear flat shoes if you would; up to the attic with you. Open up that dusty old suitcase that belonged to Uncle Fred. See if he’s got some old posters stashed away. Something historic, dating from when there were still Liberal MPs will do the trick.

Gerald Ford was the Librarian at Bristol University – his wife has just ‘gifted’ these posters ‘to a grateful nation’ sending them back to the University and wiping out her tax bill in the process.

Last year, 330 people took advantage of this scheme, where you ‘gift’ something, as opposed to having your taxes prised out of you with the aid of thumb screws, to the nation and voila! no tax bill! The great and the good gather round to gaze in admiration at your ‘gift’ – £167 million quids worth last year, around half a million per enterprising tax payer – you get rid of the rubbish in the attic that you didn’t know what to do with, and everyone claps their hands in gratitude at your generosity.

I had thought that this scheme only applied to fabulous works of art being ‘saved’ for the nation – but there are some remarkably mundane items. This leather waistcoat for instance; too small for modern man, might have ended up in one of those skips that the Salvation Army dot around to collect clothes for freezing Somalians – had the owner not had the wit to send it to Her Majesty’s Customs and Excise in lieu of his taxes. Now they have the problem of what to do with it.

Farnham museum received a portrait of one the town’s most famous sons, the 19th century radical journalist and agitator William Cobbett, settling £1,400 of tax. “That’s the strength of this scheme,” said McQuillan. “It is not just about the £4m masterpieces, it is also about works like this, which will give Farnham something that will bring to life a man closely associated with the town.”

Perhaps Great Aunt Minnie left you a rather nice piece of furniture that you actually use, or even are just fond of looking at? Fear not, they have a scheme tailor made for you. It’s called the ‘In Situ’ arrangement. You ‘gift’ Great Aunt Minnie’s commode to the nation – and they leave it right where it is! Yep, you can go on arranging flowers in it every week, no need to be incommoded and find yourself without a pot to…

Lucian Freud’s family were faced with a tax bill – and they didn’t want to part with any of Lucian’s paintings – so they gave the taxman a collection of his mate, Frank Auerbach, daubings. Frank had painted a ‘Chimney in Mornington Crescent’ (I’m assured that that is what it represents) and given it to Lucian in an act of friendship (after a very boozy dinner party, perhaps?). None of the family wanted it, even less when they realised that there were more like that stashed away, so they gathered them all up, sent them off to the taxman, who was so delighted that: ‘this was an opportunity that would not be repeated and the Panel committed all of the remaining funds for 2013/14 and has pledged almost a fifth of the following year’s budget’…on acquiring the entire stash of similar paintings.

So you have a choice – either ‘pay’ your taxes with hard earned cash, (and you won’t get any thanks) or ‘gift to a grateful nation’ all those bits and pieces you didn’t know what to do with.

Of course if everyone starts doing it, there won’t be any money to run the NHS, or to feed and house MPs or anything, so keep it to yourself for now. Raccoonteurs can be ahead of the pack.

I’ve put by a stack of posters showing the first, the one and only time, an anonymous man stood for parliament. That should do the trick this year. ‘Grateful nation’ here we come. 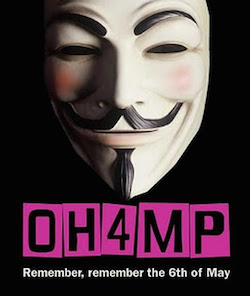 Can we expect to see HMRC at Boot Sales up and down the country soon, fixing the deficit once and for all?
I think we should be sold.

What are taxes for, anyway?

The government can create money whenever it needs it. We are not living in the Middle Ages when money had to be made out of hard-mined gold or silver. It is now simply a number on a spreadsheet.

So why bother with that army of tax collectors ?

Unfortunately the Government can’t create money whenever it needs, as I found out 5 years ago: http://www.financialreform.info/f_r_britons_are_now_slaves.html

That rule in the Maastricht Treaty only says “conventional ideas about taxes will hold”.

The question is, what is the point of collecting taxes in a digital world ?

I think it is just a tradition.

You’re obviously in Greece right now, where they may indeed pay an army of tax-collectors but precious little tax is actually collected – watch and learn this week as they commit to raising taxes across the board, in the full and certain knowledge that none of it will ever be collected. No worries, the EU spreadsheet will be adjusted to cover it again, particularly that line with the UK’s contribution on it.

I was reading Maggie Thatcher’s “Downing Street Years” last night, in a section from about 1984 where she relates a small story of some scam that Papandreou the Greek PM of the time was pulling at one of the EU beanos. She doesn’t get very specific because she believed it was the French and the Germans who end up paying and took no further interest, but she comments that it would have resulted in a “bonanza” for the Greeks. She says the French and the Germans always had breakfast-a-deux and she began to realise they were a team, no matter what they had said to her separately.

I’m already so poor I don’t pay taxes anyway, but thanks for the the kind thought.

I thought this was a timely piece, given reports this week that Margaret Thatcher’s papers had been donated in lieu of inheritance tax, and assumed that you were working up to her as possibly the most high-profile example, and yet… nothing!

Actually, I do hope that this scheme is still in place when I shuffle off this mortal coil. I have long-planned planned to donate part of my collection of film memorabilia to the BFI National Library, so if it can be used to unencumber Widow Raite of any outstanding obligations I may have to the Revenue, all the better!

I have long-planned planned to donate part of my collection of film memorabilia to the BFI National Library,

Bet most of them feature a plumber or similar workman (with moustache) turning up at the house to ‘fix her plumbing’ – little artistic merit, a certain consistency of content, merely variations on a theme of random squelchy body-parts. Amusing nevertheless.
Ask Petunia nicely and they may appear in place of the much-missed 25 Hour News (when it is much-missed, much too soon).

* assumed that you were working up to her as possibly the most high-profile example *
Her heirs you mean.

It struck me that this scheme would also explain the National Trust when the inheriting gentry were all leaving their forebears’ Estates to the Crown, so we could pay for the upkeep of the country piles instead…. …. I was right. The irony of the history is almost ball-breaking…

wiki:
“Acceptance in lieu (AiL)[2] is a provision in British tax law under which inheritance tax debts can be written off in exchange for the acquisition of objects of national importance. It was originally established by Chancellor of the Exchequer David Lloyd George as a means for the wealthy to pay the increased estate taxes imposed by his People’s Budget of 1909”

When one thinks of ‘donating to the nation’, great artworks by great artists or a great writer’s manuscripts spring to mind. I didn’t realise any old tat that wouldn’t raise 50p at a car-boot sale also fitted the criteria. Eye-opening.

Indeed, I though that was what the Lottery Fund was for.

Only poor or relatively poor pay taxes. The girl in the checkout at Asda will pay all her taxes and NI. The rich use lots of means to avoid paying tax or even stealing it. Directors will bleed a company dry of money via the directors loan account and then wind it up then not put any returns in . The really rich will employ accountants and lawyers to frustrate collection of what’s properlly due.
The Eire government had a go at U2 a few years back advising they hardly paid any tax, yet wanted ordinary people to donate to end poverty.
It’s not a fair world and we do need to pay our taxes so the government can give £12billion in foreign aid away each year whilst it’s own citizens are stuck between a rock and a hard place.

There’s more than one sort of tax tax but income tax is the one Asda-gal is stuck with, but that is because we have PAYE, if she pays it at all. VAT represents 20% of Asda turnover and then there will be the Employers NI, and then we edge towards the things none of us understand like “Corporation tax”.

Financial nit-picking, but most of Asda’s sales are currently VAT-free, being basic foodstuffs, children’s clothing etc. – probably a maximum 5% of turnover in practice.

Most food stuffs will be zero rated, booze, cigs, sweets, DVDs,,CDs, electrical goods, will be standard rated. Sales of lottery tickets will be exempt supplies.
The beauty of vat is people who otherwise don’t pay tax still can’t avoid Vat.
The really rich however will still avoid some of this, for example they set up a company to buy a Sunseeker and charter it back to themselves, the company claims the purchase vat back and receives a small amount of fees in charter rentals, but some of these will occur outside the UK eg Barbados and therefore not subject to UK vat . All sorts of “avoidance” goes on

Witty and I don’t like to spoil things but an original portrait of Cobbett is hardly your old aunt’s commode. I would have thought it was quite undervalued at £1,400 too.

Given the amount of art and collectibles from stately homes that pour out of Britain to the US or Russia every year I would have thought that a chance of the nation to get first grabs via the taxman is an opportunity not to be missed. If museums also fancy a collection of old posters (value not actually mentioned) while they are at it, it is surely up to the curators to decide?

Yes, nobody begrudges art for art’s sake, but it’s our money for god’s sake, and a penny in tax unpaid by somebody means a penny more has to be paid by somebody else. My other misgiving is whether these Statist “committees” actually know the value of much and the price of anything. Surely if these ephemera are worst what is said, then they will fetch that at auction and the Exchequer will still get the cash he’s demanding. If you owned something much more valuable than the tax-man said it was, what would you do? I’d sell it and give the tax-man what he was due. This sort of thing is wide-open to “interpretation” and whilst saatchi’s can burn a warehouse full of crap and get their money back on the insurance, I’m not sure it’s an option for tax-payers.

If the Cobbett (the only example valued) is typical then the nation got a bargain. £1,400 is nothing for a good early nineteenth century portrait let alone one of one of the most famous Englishmen of the period.

I’m just wondering what form a tax rebate might take under this scheme?