Even in the US, the land of the American dream, it can be hard to make your mark on the world when you come from humble beginnings.

Palliasse was of just such humble origins, from the wrong side of the Mall. He was a palliasse of colour, light blue to be exact; crudely described as ‘thick’ in defiance of all Federal laws governing negative descriptions of physical attributes – and ‘extra tall’; his ‘Staph Guard Vinyl Covering’, (moisture proof, washable), was insufficient to overcome his innate sense of inferiority. Even his label proudly proclaiming that he complied with California Fire Code TB #117 didn’t quite do it for him.

Palliasse wanted to be a mattress; not just any old mattress, but a mattress of note in the world, able to look the finest Queen sized, gold brocade covered, deep sprung mattress with hand stitched corners, firmly in the eye – as an equal.

In America that meant getting an education. Palliasse signed up to Colombia University and enrolled in their Visual Arts programme. 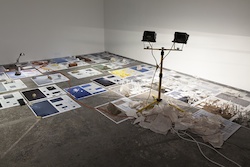 It was a tough programme; the Professor in charge, Sarah Sze, had made her name and her reputation in London’s Islington by scattering newspapers on the floor and putting a floodlight on each one: an act which allegedly mutates newspapers, from something known, to something foreign, fragile, newly composed, and entirely transformed. Wow. Write your final Thesis round that one… 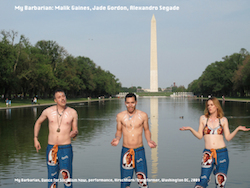 Alexandro Segade is the head of performance art at Colombia – Palliasse looked at his work. Alex’s current project is the ‘post-living ante action theatre’, which engages pedagogical models and group participation to recreate Boal’s Theatre of the Oppressed…you do this by standing in the pond in front of the Washington monument with a picture of Obama stuck on your knickers. This was more like it, Palliasse could see a future as a useful member of society beckoning. All he needed was an ‘of the moment’ symbol of his oppression and museums round the world would be clamouring for his services.

Palliasse enlisted the services of Emma Sulky or Sulkowicz or Summit. He vowed to carry this 75lb, brace wearing daughter of a pair of Chinese/Japanese/Jewish Manhattan psychiatrists, her with the purple toe nails, around with him wherever he went on campus.  This was no random choice, for Emma claimed to be that throughly post modern icon, a sexual abuse survivor.

Palliasse could see the final thesis, cribbed from a thousand art critiques. Surely nothing could more clearly illustrate experimental trades in extremes of minimalism, but would also move into gorgeous ambient portions that don’t bring easy comparisons to mind? Dazzlingly liminal, transgressing conceptual boundaries; bed-springs inducing a Heimlich manoeuvre of the soul; an aesthetic ground zero of rape-culture; an accusatory finger pointed at the #Idisbeliever. An echt-Proletarian traceable back to the Engelian patriarchs, Palliasse has found a post-Marxist way to encourage les autres. Despite stiff competition from a stuffed egg laying octopus and a llama-dung Mother Teresa his conceptual art carries, for corporate collectors, an eye-watering price tag and will ……Colombia University apparently agreed. [Ed. Who finances these people?]

In no time at all, Palliasse’ original thesis had been cribbed by a 100 plagiaristic mattresses across America. From Penn to Ball State, from Louisiana to Pennsylvania, aspirational common or garden mattresses were lugging ‘abuse survivors’ around with them across campus. “Carry that weight” they cried out to each other – and in truth these flipperty-gibbet girls were not heavy, and the copycat mattresses were relived of their burden when the girlies went off campus.

The prize must go to originality though, and Palliasse was the first. No longer a humble straw pallet, he took his place with the great mattresses of the world – last week Mattress graduated. 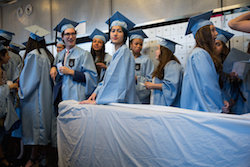 President of the University, Lee Bollinger, acknowledged Mattress’ right to be universally lauded by greeting him on stage despite having sent an e-mail to all students beforehand asking them not to bring “large objects which could interfere with the proceedings or create discomfort to others in close, crowded spaces shared by thousands of people” into the ceremonial area. Presumably Emma Sulky-or-whatever was not considered too large to be on stage with him, though the President apparently made his displeasure at her attempt to upstage Mattress by refusing to shake hands with her.

A spokeswoman for the university, Victoria Benitez, said that Mattress had been between Ms. Sulkowicz and Mr. Bollinger and that no snub was intended.

So what of Mattress’ future now? Does the Turner Prize beckon? Will the Country of Bedfordshire appoint him as curator of a Museum of Beds? Does the European Commission even have a Commissioner of Beds and Bedding?

So far he has been invited to the State of the Union speech by a Senator; Los Angeles Mayor Eric Garcetti, Columbia’s commencement speaker, gave the mattress a triumphant shout-out in his address. There are rumours that a major film studio wants him under contract. If all else fails, E-Bay beckons.

However, it is hard to think of your future when there are dark mutterings from the #Idontbloodywellbelieveher crowd. It is said that Emma Sulky may not have been a good choice as ‘iconic abuse survivor’. Paul Nungesser’s claim to fame as ‘serial rapist of Emma Sulky’ failed to leap over the laughably low legal hurdle set by Colombia University’s Gender-Based Misconduct Policy which merely aims to prove sexual misconduct based on ‘a preponderance of evidence’ – neither “beyond a reasonable doubt,” nor even the lesser “by clear and convincing evidence” standard of proof is required to establish guilt of sexual misconduct.

Ms. Sulkowicz did not press criminal charges, a lengthy process that she said would be ‘too draining’ – compared to being carried by a Performance Art Mattress ‘until her alleged (and found innocent) ‘rapist’ was expelled from the university’ – and the ensuing worldwide notoriety.

Mr Nungesser was cleared by the University authorities. Several times. Now Mr Nungesser has filed a federal discrimination lawsuit against Columbia this spring, on the grounds that the university let Sulkowicz smear his reputation.

His parents have spoken:

Responsible for this nightmare is not just the woman, who received an academic degree for the attempt to shame Paul away from campus, but even more at fault is the University that conferred this degree. A university that bows to a public witch-hunt no longer deserves to be called a place of enlightenment, of intellectual and academic freedom. By failing to intervene in this injustice, Columbia ceases to be a place where critical thinking, courage and democratic practice are taught, learned and lived.

Such a shame that Mattress’ ingenuity, originality, and free thinking should have been tarred by an unfortunate association with a false allegator and card carrying deranged light weight feminist. It may prove to have been a burden too far.

Did it achieve Posturepaedic standard?
Boing! Time for bed.

Reading this makes one believe that psychotropic substances had been sprinkled on one’s Weetabix this morning.

Use of the relatively obscure word ‘palliasse’ makes one believe that our admired authoress probably completed the fiendishly cryptic Telegraph crossword earlier this week, in which ‘palliasse’ was one clue’s solution.

‘The consequences of getting your pally ass from a sulky’

I’ll get my coat…

Is this college a hotbed of discontent? Can we expect something like an Arab spring? If so, I feel they need to bolster support for their campaign. Perhaps they should take a straw poll.

If she was of chinese, japanese and jewish heritage, was she unscrewtable!

Might sell for more than a Tracy Emin, too

Jesus says, “Arise, take up your bed and walk.”

This woman is a headcase:

as are almost all these “survivors”; I’m still waiting to hear your comment on this nutter:

and you may have noticed that another clergyman has been convicted of historical sex crimes. This witch-hunt beggars belief.

Here’s a link to the lawsuit. Absolutely astonishing. The text exchanges between the two of them reveal a rather, er, multi-talented young lady (I shan’t call her a slut!) with a terrible crush on the unfortunate guy. Nothing hath fury like a woman scorned, and all that

So mattress girl isn’t simply a headcase, she’s a slut. Whoever would have guessed?

Thankfully it appears that Mr Nungesser did not own any pet rabbits for this mad bunny boiler, oops, sorry, I of course meant to say alleged “traumatised survivor” who must always be believed at all costs no matter what, to get her scorned hands on!

It’s about time that those proved to have made false allegations were given the sort of sentences given to those proved to have been abusers. Perhaps it would be a good idea to have a false accusers register and make them report regularly to a police station upon release from prison. Maybe then these flaky bastards would think twice about entering fantasy land. I’m afraid that the situation we are now in is all part and parcel of this “touchy, feely” society and endemic political correctness, where every idiot with an axe to grind must be believed.

…but, but, then the real victims will feel intimidated in coming forward. Don’t you understand how distressing it is to have had your bum patted by a celeb forty years ago? Have you no sympathy for how these survivors endure a lifetime of doubt and dry skin, before a kindly therapist releases their suppressed memories and a path to financial compensation, which can never be enough for those lost years?

There has been an attempt to make a register of false accusers. I will expand my false rape timeline when I get time.