In Waco, Texas, a widely advertised gathering of hundreds of armed Hell’s Angel style bikers to celebrate Memorial Day erupted into armed warfare as the choicest ‘Turf’ was fought over, and was policed by a handful of men. 22 Officers to be precise.

Topless waitresses at the local ‘Hooters’ restaurant, flashing their nipples, jostled for front row positions. The ensuing battle saw 9 dead and 170 arrested. Earlier estimates of ‘1,000 weapons’ have now been revised downwards to 320.

We have our own way of copying these events.

Just at the end of Hadrian’s Wall, that well known trouble spot, where a lone policeman could be overwhelmed by dangerous marauders, 30 policemen and half a dozen sharp shooters nervously gathered. Helicopters hovered overhead shinning their searchlights on a very British ‘turf’ war.

So very British – twice the number of policemen and no topless women, but we did manage some nipples. Only one dead and no arrests.

No, not another Raul Moat; 3 ruminating ruminants for pity’s sake. 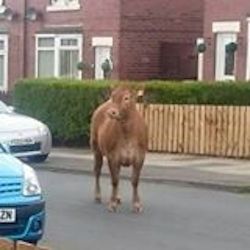 The cow, nicknamed Bessie, was one of three that escaped from Rising Sun Country Park in North Tyneside on Sunday.

England is such an animal loving isle that PETA, the animal rights organisation is petitioning the Landlords of ‘Ye Olde Fighting Cocks’ to be renamed Ye Olde Clever Cocks, in what they claim would be “in recognition of society’s growing compassion for animals and in celebration of intelligent, sensitive chickens”.

So, no surprise at the response to this latest episode of police ‘violence’ when apprehending escapees.

8,456 people are planning to attend a memorial service for Bessie the cow tomorrow – dressed in cow ‘onesies’. In fact, Bessie’s demise has created such a run on cow ‘onesies’ that Wallsend has run out – and they are desperately appealing for news of further supplies.

If the Buddhists are right, I want to come back as a cow and eat the green green grass of home.
http://modernfarmer.com/2014/09/inner-life-cows/
“It’s good to know a little cow psychology when dealing with an animal that weighs up to 1,800 pounds, and has four solid hooves. Eiko Volkovich, of Skagit River Ranch in Washington State, says, “I don’t own a cattle prod. I’ve never owned a cattle prod. When I want my cows, I go out to the pasture and I whistle, and they come.””

I think you’ll find it was absolutely intentional!

What the UK needs is coup d’état

What i should have said was Bessie was planning a coup d,etat, Well at least it was warm so she wasnt friesian!

Firstly, congratulations to the landlady for providing a candidate to The Guiness Book of Records for the most puns included in a single sentence!

Perhaps the brewery ought to rename the premises “The Cupid Stunts” in honour of PETA’s publicity stunt.

I’d counsel against renaming the pub ‘Ye Olde Clever Cocks’, lest the FemiNazis immediately object that that name is discriminatory as they’re ill- equipped to be included.

I wonder what the Pub ‘steakholders’ will make of it?

The Fighting Cocks? I’m surprised it’s never had a complaint from the lunatic wing of the Christian Evangelicals. Many years, ago, when a local pub was renamed ‘The Pheasant Plucker’ and decorated with a new pub sign depicting a very pleasant young lady in the act of pheasant-plucking, the local local evangelical Christian pastor (self-styled) protested vociferously against it. When the local newspaper asked him precisely what his objection was, he could only splutter about the offence caused by inebriated customers mispronouncing the name!

“…On the horns of a dilemma, a thick flank of boys in blue manoeuvred …..”

OT, I know, but I thought you might have a view on this one, where a 37 year old got an under 10 year old pregnant. Twice.

I wonder if PETA will organise a demonstration in support of that couple?

Guessed the link wouldn’t be about a bit of skirt.

a bit of skirt.

bit below the ribs but I’ve got a haunch you’ve captured the rump of it.

To finish with a flourish, load of tripe here today.
Sorry, beaten at bowls today at Chichester, so slightly liverish.

Sorry, liverish because I’m for the chop.

The bobbies could have just asked Bessie to “Moooooove along, udderwise we’ll heifer arrest ya and take ya into cudstody”

The animal rights loons are, predictably, loons and deserve all the opprobium that can be heaped on them.

But they might have a point in that the police defend their actions with ‘the animal was becoming increasingly distressed’ and yet photos and eyewitness reports show a cow quite phlegmatic, and accordingly to some, actually grazing at the point it was gunned down.

I dunno, couldn’t they have stuck with ‘the suspect vaulted the ticket barrier and refused all orders to stop (that no-one else on the carriege heard, inexplicably) before we put eight bullets in his head’..?

Of course cows get ‘distressed’ when there’s twenty (According to The Register) nervous officers who’ve probably never been faced with one mildly annoyed milk cow and need a marksman and a Police Helicopter to take down this threat to ‘security’. Which was probably a member of ISIL anyway.

In days gone by of course, they’d have had to deploy the Red Bucket. But that wouldn’t have been half as dramatic.

Grazing? Why it could just as easily have been priming the suicide bomb vest that it might just, maybe, have been wearing underneath that puffer jacket that the police say it was wearing…. Well anyway just look at it…. Its got brown skin for heaven’s sake! I mean come on, what more proof that it was clearly a threat to western civilisation does the average Daily Mail reader need?

before we put eight bullets in his head’..?

The cream of puns are on display, but to be serious, it doesn’t sound like this “tragedy” was necessary. Call me a cynic if you will, but that massive police presence seems like the lads down the station felt like a nice day out, safe from weapon-concealing Geordie scallies or my fellow marauding Scots coming down to take more seats in the Commons (because there just aren’t enough Marxist-Leninist control freaks there already).

Of the 12 to 15 John Wayne films I have watched in the past year, some feature thousands of head of cattle being driven across many hundreds of miles, including through towns. Nobody panicked. The Marshall didn’t step out onto the Main Street and have a showdown with a cow to the tune of “Do not milkshake me, oh my fatling”.

I’m sure that Dixon of Dock Green would have slipped a rope around the bovine’s neck and cycled back to the country park with it running behind.

He wouldn’t have made worldwide “news” though or filled an animal full of bullets as if he was assassinating a Brazilian on the London Underground.

No, not another Raul Moat

Just yesterday, I watched “The Alamo” (John Wayne, 1960). Watching the documentary ‘extra’ afterwards, I learned that there wasn’t a single serious injury during its making, which included over 2,000 horses, many being brought to the ground with their riders and hundreds of cattle which Davy Crocket & Co managed to steal from the Mexicans and drive to the Alamo, as their food supply was nearly out. The only injury during filming was when a cannon recoiled and the wheel landed on an actor’s foot and smashed it up a bit. He didn’t even grimace. True pro.

Bessie the desperado from the Rising Sun Country Park was obviously flaunting the jaywalking regulations.

Pigs kill a cow making a bid for freedom…. Remind you of anything?…. “All animals are equal, but some animals are more equal than others”, and “Four legs good, two legs better!”

The same forces have decided that the coat of arms of the County of Warwickshire must be moved into the PETA friendly age. No longer the bear chained to a rugged staff, it now comprises a bear and a rugged staff. Some of the older county venues still show the results of the chain being chiselled off.

And we complain about ISIS’s adventures in Palmyra?

“Bessie” seems to be the American form of the English, “Daisy”, I have noticed, browsing the web.
Clearly another sign of the times we live in.

Might depend on the broadness of your drawl perhaps… but it may be Romanesque.

A common or stereotypical name for cows or horses
http://en.wikipedia.org/wiki/Bessie

“Not long ago, a friend and I were chatting about our collective memories of having grown up on a farm. She asked me if I remember anyone in my family bringing the milk cows in at milking time by calling them “Bossie.”
http://www.farmanddairy.com/columns/calling-%E2%80%98bossie%E2%80%99-stands-the-test-of-time/8931.html
“Linda went home and did some research and learned that the name Bossy likely originates from “the genus for cows is Bos taurus. Apparently Bos is the Roman word for cow.”

Give the plods a cowpat on the shoulder for another ill considered, fatuous exploit. They were in too much of a slurry to kill poor Bess. Putting her on the same page as Mr Moat is an insult to all bovine victims of police predators. She wasn’t on steroids or seeking to kill an errant partner, just fancied a change of scenery and pastures new…poor cow.

To be fair, some breeds of cows can be dangerous, specifically beef cattle; they’re not used to human contact and all that meat-producing testosterone makes for an aggressive temperament. (The worst of the lot have to be Galloway cattle. Don’t be fooled by their small size – they regularly kill people and should NOT be approached when they have calves with them.) Dairy cows, however are generally sweet and easy-going – they’ve been bred for easy handling. If that’s Bessie in the picture, then she was a dairy – a Brown Swiss by her looks – and undoubtedly partial to the contents of a Red Bucket or three. All the police needed to do was to block her in, maybe shut her into somebody’s garden, and wait for the stockman to get his trailer to the scene.

Looking back at my time in the police there were numerous occasions of dealing with animal related issues. Escaped dogs, sheep, horses, cows and even a nuisance swan that was blocking a main road…..happy days.

I never had a pet growing up so was always out of my comfort zone dealing with animals though you may be disappointed to know I never had to call out a ‘SWAT’ team when dealing with the above.

I do recall the early hours of one morning engaged in trying to usher an escaped cow away from the town high street. That was successfully done but only at the expense of the cow wandering into a front garden and leaving a rather large eco-friendly pile on someone’s lawn.

I leave it to your good selves to make references of a crap service off the police. I can’t argue with that one

“I leave it to your good selves to make references of a crap service off the police. I can’t argue with that one.”

Nonsense! I think you deserve a ‘pat’ on the back! Oops, now I’ve gone and put my foot in it! Etc, etc…