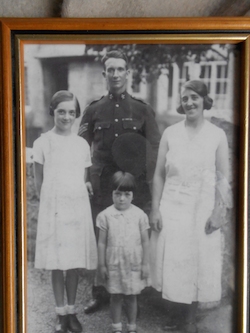 100 years ago today Britain entered a war in which Europe slaughtered its young men on an industrial scale. Two of the men who fought and thankfully survived were my grandfathers. My paternal grandfather fought with the Grenadier Guards. My maternal grandfather Walter Burke (pictured above, in the late 1920’s when he was a territorial) was a soldier with a (or the) Manchester Regiment.

He must have been very young, and looked it, because his nickname was “Baby”. I never knew him. He died when I was a baby. I know only a little about what happened to him. He was shot and wounded in an attack, and fell into a shell hole. The Germans came across bayoneting the wounded, and he survived by playing dead. Later on the day he was rescued when a counter attack retook the land.

According to family legend, he was sent to Castle Howard to recuperate, where he and a daughter of a titled family who was serving as a nurse fell in love. But he was a working class lad and they were not permitted to marry. One small remarkable story of an “ordinary” man amongst so many. What horrors they both saw or encountered I cannot really imagine.

Amen to all the sentiments expressed here. There can be few families, of that generation, not touched by the Great War. Both my grandfathers fought. My maternal grandfather was a regular soldier at the outbreak and fought in the initial British battles during August. He had the misfortune to have been taken prisoner during one of these early battles and spent the next fours years in a prion camp in Germany- he came back as a skeleton of a man. I never met him as he died in 1947 of cancer. My dad’s father fought at the Somme and beyond. Although not physically injured he was psychologically hurt. I remember him dimly as he never spoke to me directly. According to my father, he never spoke of the war to him, at all. I discovered his metal cap badge in his garden whilst playing. I suspect he had discarded it on purpose and it is the only memento I have of him.