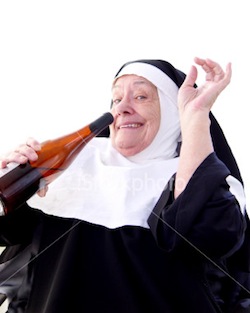 I went to sleep thinking about Wally, I woke in the night thinking of Wally, and he was back in residence in my mind at the crack of dawn. I have no idea why.

Wally isn’t even his real name, but at some point in the night as I retold myself the tale, I christened him Wally.  I must have known that I would need to hide his real identity, that I would be able to write nothing else this morning until I had got Wally out of my system.

It may be something to do with seeing Sister Eva’s new avatar; Wally’s downfall was a Nun’s downfall. It could be to do with the predicament Mr Gilliland finds himself in.

Wally lived in one half of a pair of Georgian houses looking out over the Irish Sea. If you stood right back from the window, all you could see were the waves crashing over the harbour entrance. Stand closer to the window and you would take in the derricks, flotsam and jetsam of a busy container port.

One of the things which hadn’t changed was Wally’s great grandfather’s name on the deeds. Neither his grandfather, nor his Father, nor his Mother when she inherited, nor Wally himself, had ever bothered with probate, they just went on living in the house.

They didn’t bother with paint or paper, the house wasn’t an investment, it was just where they all ate and slept, fought, made up, and procreated future generations.

Wally didn’t spend a lot of time in the house anyway, he took off to sea when he was 15, not looking to better himself, just earn a crust and see the world. A merchant seaman, he had settled into a steady life as a stoker, keeping the fires burning brightly on the tramp steamers. Not far to walk to work, and not far, several months later, to walk home on leave.

He barely touched his wages, sent them home to his Mother. Wally was a card player, poker, and he could always earn enough from the cards to pay for his fags and booze.

The Court of Protection order said that his Mother was his Receiver – or Deputy, these days. The Court was trying to obtain probate, and I was to find out ‘what was happening’.

I was surprised when I met her; she appeared to be a good 20 years younger than Wally. Unusual, even these days. She seemed unwilling to talk to me, but offered to take me ‘next door’ to meet Wally. Legally, she didn’t have a lot of choice.

Wally opened the door to reveal a dingy interior that could have been a stage set for Miss Haversham. Another surprise for ‘Mother’s’ half of the pair of cottages was Chelsea Mews spick and span, interior decorated to within an inch of its life.

Wally glared at ‘Mother’ as she introduced me, and then pulled me inside, shutting the door in ‘Mother’s’ face.

‘Oh dear, have you fallen out with your Mother’ said I? ‘She’s nae me Muvver, she’s me ex-wife’ said Wally. It promised to be an interesting visit.

He led me into the back room. Coal fire burning brightly, it was warm enough. It had, in the past, even managed to singe the leaves on the tree. The tree that was growing through the brickwork under the window and into the living area. Nothing else had changed in that room since the Crimean war.

So far my notes consisted of ‘Receiver ex-wife not Mother’, and ‘tree growing through wall’. They got a lot more interesting.

His ex-wife, he told me, now lived with a property developer; the developer wanted to turn the two houses into one. You didn’t need to be Kevin McCloud to see why.

Wally liked a drink, had done all his life. Long months at sea were punctuated with serious drinking binges on dry land. Britain, Brazil, it made no difference to Wally where the dry land was, that was just the way he liked his life.

When he retired at 65, he only retired from the sea; he went on doing what he did on dry land – it made sense to him.

His ex-wife had soon got fed up with this, and moved into the empty half of the two houses, latterly joined by the property developer.

He had hooked up with a couple of friends in town; played poker long into the night, drank some serious amounts of whisky, kept the fire burning, ate occasionally, and that was pretty much it – a contented man.

One of the friends was a Nun; we shall call her Sister Mary. The other was the manager of a building society, Mr Mortgage. They liked a drink too, and played a mean hand of poker.

‘Not any more’ said Wally sadly. Why not? Well….

One dark and stormy night, as they say, the three of them were midway through the third bottle of whisky, in the midst of a spectacular hand, when Sister Mary announced that she needed to use the loo. I would imagine it was something she normally avoided, for Wally showed me the remains of the loo.

A wooden structure, it stood lopsidedly in the back yard. I didn’t closely inspect it, so cannot say for sure whether it was even connected to the mains drainage; I doubt it.

Out ventured Sister Mary, and minutes later there was a crash of thunder and lightening. The tree in the living room shook some of its leaves off. Mr Mortgage and Wally ventured to the window and peered out.

The backyard loo was now standing drunkenly on its side, a huge branch of the tree having fallen against it – and it had landed against the door – with Sister Mary still somewhere in its murky depths.

Several minutes, maybe half an hour or more, of befuddled conversation passed, but words were not sufficient to release Sister Mary. The fire brigade were called and chain saws achieved what two drunks couldn’t. Sister Mary emerged, battered, bruised, bloodied, and befuddled. So befuddled that when the fireman led her to a waiting vehicle, she merrily went with them. Laughing, she was; not for long.

They took her to the local hospital; the hospital called the convent; Mother Superior arrived and took her home – and instigated a search of her cell or cloister or whatever it is.

A fruitful search. It turned up several empty bottles, the deeds to Wally’s house, lost in some far distant poker game, and several building society books – all in different names.

Sister Mary was despatched back to Ireland, but that was not the end of the tale – not nearly. You see, you remember that Wally had been sending money back to his Mother for years? She had been squirreling the money away in Mr Mortgage’s building society; not having obtained probate, Wally had no access to these whisky tokens.

Mr Mortgage was not above a challenge, and he had arranged to push these funds around – their owner known to be well and truly dead – various accounts that Sister Mary had conveniently opened. Old friends, helping each other out, wasn’t the money rightfully Wally’s’ anyway?  It would never have come to light had the tree not fallen on the loo.

Mr Mortgage had been duly prosecuted and was now in prison, Sister Mary back in Dublin – never to be heard of again. They hadn’t reckoned with the ex-wife.

The court case involving Mr Mortgage having received a fair bit of local publicity, and news of the Nun in the loo being the hot topic of conversation – ex-wife wanted her share of the building society money. She hatched a cunning plan.

The local Doctor was persuaded to sign a form for the Court of Protection – Wally ‘wasn’t taking care of himself’, ‘had no appreciation of the need to pay his council tax’ – Mrs Wally had been paying for both sides of the house for years, unwilling to let Wally’s negligence lose her a desirable home – it was sufficient. ‘Mrs Wally’ was duly installed as Receiver, and everyone assumed that she was his Mother.

I duly reported back, in the most objective terms I could manage, this exotic tale.

The following year, I was told to see Wally again. This time the address was ‘St Cedric’s’ or similar. Ominous. Sure enough it was a care home. Octagonal in shape, with an octagonal open courtyard at the centre.

‘Wally’s looking much better’ the matron told me brightly. He was unrecognisable. His long tangle of hair had been shorn to a crew cut – ‘he had terrible lice’ Matron said screwing her face up. He had been bleached, primped, straightened, clipped and scrubbed to within an inch of his life, presented with a pair of jogging trousers several sizes too large, and was now walking a steady circle round the interior courtyard in the pouring rain. Rows of semi-comatose old dears sat in armchairs arranged round the courtyard watching him. ‘We can’t stop him smoking at all, he’ll probably ask you for a cigarette’ she warned, ‘but we go all ‘no smoking’ in another month’.

I have never seen anyone more miserable. The Wally of a year ago who had roared with laughter as he told me of his downfall was gone. This was a man defeated by life. Shorn of his whisky, his cards, his friends, his coal fire, his great-grandfathers house, his view of the sea.

A success by Social Services standards. He no longer had lice – even the Prime Ministers children get lice! His finger nails were the prescribed length. His accommodation was faultless, no trailing wires, sanitary loos, nothing you could cut yourself on, burn yourself on, trip over.

He was a success story by Court of Protection standards too. Probate had been obtained, building society funds duly accredited, house put up for sale to fund his care home, Statutory Will made out, Receiver changed to local solicitor.  Not much left in the account after all the legal bills had been paid.

I drove past the houses on my way to the next appointment. All one colour now, the second front door blocked up – I dare say the courtyard had been gentrified too. I could guess who’d bought it.

Everybody patting themselves on the back – job well done.

I can’t argue with the fact that he hadn’t been paying his council tax; maybe he didn’t take care of himself to the standards of Social services; we can’t have everyone going around not getting probate. Nuns shouldn’t get involved in building society fiddles. Building Society Managers shouldn’t help out old friends who can’t be bothered to get probate. Yeah, yeah.

But daft and uproariously funny old drunks who want to spend their evenings playing poker with like minded folk shouldn’t have their world turned upside down just because a tree gets hit by lightening.  Wally died a couple of months later. What harm had he really done to society? To anyone?

Right, that’s Wally out of my system.

** Ms Raccoon is on her hols until Sunday, so has been digging some old posts out of the bottom drawer of the filing cabinet to keep you amused…

The Court of Protection has fascinated me even though I had never heard of
it until quite recently. A friend is being lined up to work as a crew member
on a film about the late manager of The Who, Kit Lambert.
http://www.hollywoodreporter.com/news/cary-elwes-direct-biopic-who-402368
He
has seen the script and apparently much of the movie deals with Lambert
voluntarily having himself placed under the Court of protection ostensibly to
avoid a serious drug charge, only to find himself suddenly with no control
over his life or money, something that lasted until he died under suspicious
circumstances a few years later.