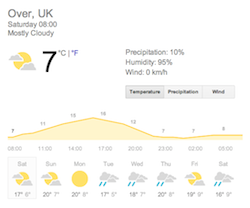 How is the weather in your part of the Bank Holiday British Isles?

Looking at the weather map, I see that West Freugh (I had to look it up too â 5 miles south east of Stranraer, over on the west coast of Scotland) had the best chance of seeing the sun and yesterday reached the dizzy heights of 15Â°C. If they are to be believed â the temperature was recorded by the same outfit that claimed they saw a UFO back in 1957.

Elsewhere in the UK, I am reliably informed it hovered around the 7Â° mark. Brrrr! Dear old Cromer recorded an aquatic 20 mm of rain, and hailstones rain down over parts of the Watery Isles as I write.

Fear not, the Government is spending your money wisely. Public Health England, our newest, shiniest, Quango has had minions toiling away for weeks, committee meetings by the bucketful, project managers rushing back and forth, and phew! just in time for the bank holiday, has rushed out their latest glossy report.

The Heatwave Plan for England 2013!

âThere is consistent and extensive evidence from around the world that exposure to excessive heat kills.â

âThe Heatwave Plan is an important component of overall emergency planning and sets out a series of clear actions that can be taken by healthcare organisations, local authorities, professionals working with vulnerable people, and individuals to help keep people safe during extreme heat. To avoid the devastating consequences of a heatwave, we strongly encourage each locality to consider the actions in this plan and adapt them to their local situation, as a component of wider resilience planning and long-term climate change adaptation arrangements.â

Yes, despite the gurgling sound from the submerged exponents of global warming; notwithstanding the time spent hunting fresh heating supplies for their miserable offices; the global warming enthusiasts are still on message.

Parts of Germany had 15 cm new snow over the weekend (Yes NEW, meaning that
the âoldâ is STILL there!!).

Makes you want to find the nearest piece of green slime, and tie it by the
neck to the nearest lamp post if they hesitate ONE second when answering âSo,
what happened to global warming, then?â

We can argue about global warming, but I still donât recall a summer better
than â76; flying regularly between Glasgow & Heathrow over parched fields,
and the oppressive heat at night in the south.
Still this seems to be about
an expensive campaign to tell people that when itâs hot things there are
consequences.
So we need to be told to put a hat on, sit in the shade, A
& E need to be aware itâll get more sunburn and sunstroke cases, and our
crap roads go soft.
Patronising twaddle that seems to ignore we have a
brain and make our choices.
And should expect our hospitals and local
authorities to do the same.

Only two days good enough to sit out, I am sick of the weather here, heat
wave, I wish! I still have the heating on at night and my last two quarterly
bills were about Â£1,000 it is worse than a mortgage now. I am beginning to
forget what a summer is or rather was.

I despair at the article and the comments. Climate change and global
warming are about far more than one wet summer or cold spring. The
understanding of science in this country is woeful.

âClimate change and global warming are about far more than one wet summer
or cold spring.â

Which is why itâs always so ridiculous when a Hurricane Sandy or somesuch
is held up as âThe New Normal.â

The Antismokers play the same game with people such as Heather Crowe, Roy
Castle, or Dana Reeve â trying to claim individual tragedies, ones that most
likely were not related to smoke exposure even if one accepts generalized
antismoking statistics as accurate, are definitive demonstrations of a
general rule.

Itâs wierd. When I was a nipper, we were told that we were sliding
inexorably towards the next Ice Age. Nobody seemed to bother much. Now we
may end up with vineyards in Northumberland, and weâre all supposed to rush
about waving our arms about and panicking.

When those in the media can tell the difference between natural phenomena
and man-made ones, there may be scope for concern. Actions even. However, at
present, the imperfect state of climate science canât find much evidence of
man-made global warming, except perhaps for some localised effects. Itâs
rather hard to see what all the panic is about, unless itâs a political
hijacking of currently very incomplete scientific investigation.

There was a time when 99.99% of all scientists said the world was flat.
Anyone with the temerity to maintain a different opinion was subject to the
standard public vilification methods of the time, while the âscientistsâ
prospered. It worked to the benefit of those 99.99% to support their
myth.
Nothing changes.

âthe understanding of science in this country is woefulââ¦â¦.indeed it is,
and you prove it yourself wittering on about global warming, there has been
no global warming for a decade-scientific fact, despite all the climate
âexpertsâ analysis and doom-saying. To the extent that there is global
warming and cooling throughout history long before we burned petroleum
products, science and certainly the BBC and its fellow-traveller the Met
office has not the faintest idea why it occurs.

Hysterical reports of global warming by the BBC has undermined itâs other
reporting (if that is possible).

I do not know if it was reported there, but we had a short âTeletext
newsâ thingy that said âThe planet is warming at a much slower rate than
at first thought/predicted.â From some Minor enviroment science group,
like NASA, or the N.G.S, or something.

However, as you would expect, this was rapidly âpulledâ. And nothing
else has been heard.

Gorgeous day here in Lancashire Anna, and warm enough to sit outside in a T
shirt and joggers. It is nearly June however and this is onlt the second warm,
DRY day weâve had just 20 miles from Manchester.
Global warming my
arse.

In 2003, there were 14,802 heat-related deaths in France, according to the
French National Institute of Health. This happened in August of that year.

In the same heatwave, around 2,000 more people than usual died in the
United Kingdom.

And then again, in 2010, a heatwave killed people in Spain, France, and in
Russia âLikely in part due to the heat wave and smoke from forest fires,
Moscow recorded 14,340 total deaths in the month of July, 4,824 more than the
number recorded in July 2009.

Maybe we in the UK, like the good people of France, should shrug our
shoulders and say âCe la mortâ. But it seems to me that 2000 deaths is quite a
lot. Maybe, at the very least, itâs worth thinking about what the government
reaction should be to a similar event in future? And writing down those
thoughts?

But can the government do anything about the weather?

Well, no. But they can think about the effects on the railways and the
underground, for example, and have some plan for closing anywhere that is
likely to become too hot to be healthy. What about the London Eye? I canât
remember how long youâre enclosed in a glass bubble without air cooling, but
it would be good if someone at least thought about it. And there may be other
things they can plan for â I donât know, because I havenât spent much time
thinking about this.

So thinking about a reaction to a heatwave doesnât sound silly to me.

Itâs all about survival of the fittest â just one of natureâs ways of
enhancing the gene-pool and correcting population levels, we interfere at
our peril.

It is more probable that you will be killed in the UK by (specifically) an
Islamist terrorist or the NHS (another terrorist organization), than a
heatwave. Why then are the government wasting money on this useless programme,
when other priorities are starved of a budget?

The Camoron follies, appearing every day at the end of the pier, during the
great British summer-bring your own pac-a-mac and soggy crisps, and prepare to
be thoroughly demoralized.

Is it any wonder people are flocking to UKIP.

Scientists claim that EVERY YEAR since records began has included at LEAST
one âwarmest day of rhe year so farâ.

British weather has been awful ever since Bert Foord retired.

Personally, I blame that Michael Fish, itâs all his fault.

Who can forget his deliberate ploy in giving a false BBC weather forecast
of mild weather in October 1987 which suckered many innocents into going out
for pleasant autumnal walks whilst he secretly used his evil weather machine
to unleash the violent October 1987 storm on us. Itâs true I read it on
DavidIcke.com.

And as for that tornado in Oklahoma, that has got to be the fault of all
of those evil right wing global warming Deniers who refuse to accept the
post-normal science theories invented by our glorious comrade faux
scientists.

They have a âsisterâ to this, The Cold Weather Plan.

Perhaps we should all go round supermarkets with plastic gloves on or take
a pack of cleaning thingies off the shelf and clean the handles before use.
Then put the pack back. They might take some notice then. Anyway since I broke
an ankle I order on line and delivered to the door. I though we all knew what
to do in a heatwave . Discard most clothing . Keep in the shade, a fan helps
and a flat freezer pad at my back and under my swollen ankles and chill out.
It will not last long here anyway. Cheer up it may never happen! I think this
is going to be the coldest winter for UK since the last ice age!! the longest
as well.

Brill idea miss mildred. Use their own kit to clean them up, I might
experiment.
Hope the ankle heals well.

Ah yes Dear Anna.
Public health. To begin with it is a misnomer. This
Quango is established as are the others to give employment to operators of the
principle , they function little other than to churn money in certain
directions. These worthies would acquit themselves well, if they were to leave
Sun worshippers alone and tackle the most blatant example of public infection
existing to-day. Supermarket trollies.
These crimes against humanity
implements are not cleaned, each one is used daily probably by 50 people with
various degrees of personal hygiene, some non at all. They are the most
efficient method of sickness epidemics in the UK. They are coughed on, spat
on, and even worse traces of the human condition are found on them.
It
smacks of a cosy relationship with the administration that Supermarkets are
allowed to infect the population by not disinfecting these filthy items, at
least once a week.

Yes Anna yesterday, Friday, was dire weatherwise, and for other reasons
too. Cold about 9c and spitting with rain all day. The odd split of sunshine
to lighten the gloom of late May. Squalls and heavier rain in the late
evening. All day long the miserable news about the Woolwich killing. Just
about the longest winter I have ever encountered too. My garden like it.
Verdant colourful and growing like mad. A bit of sun and it goes crazy to
catch up. Over and over at Chelsea flower show they say what a difficult year
to get their show plants ready. Elsewhere others are are musing about
heatwavesâ¦â¦.well you never know!

Itâs all part of a grand plan by the Met Office to try to justify the need
for an even-more expensive computing toy.

After all, on 20th Dec 2012 they did publish their Global Warming
Propaganda prediction:-

Important safety notice: Remember, there is no safe level of exposure to
heat. Absolute zero is eternal, all else leads to death. Please join and
contribute to AZH (Absolute Zero Humans) today!