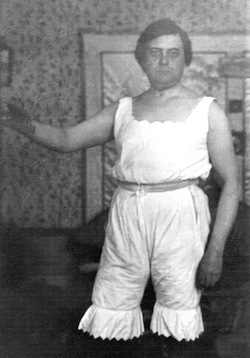 From the Sutton Guardian this morning we learn those those living in the comedic suburb of Sutton – all those mock-Tudor houses, privet hedges, manicured lawns and Margot Leadbetter look-a-likes in Hermes scarves and Wellie boots so beloved of the sit-com writers – are conducting the most joyous of sex lives.  Who’d a thunk it eh?

Not the achingly trendy Range Rover driving, Conran interiored denizens of Notting Hill or Islington, nor any of those gritty Northeners with their appetite honed by stoking furnaces in a Dickensian Hell all day; not the Welsh, fresh home from sheep guarding duties, nor even the Scots with their curious garb designed to keep the crown jewels cool and ever ready for action – but the boringly safe, golf club wielding, Sunday car washing and hedge trimming experts.

The Spanish ambassador, describing London to the Queen of Spain in 1657, predicted that ‘there would be no City left shortly, for it will all have run out the gates to the suburbs.’ Heading for Sutton, no doubt.

The website cites his hobbies as [..] “running across all eight lanes of the M25 at junction eight dressed only in a basque and a pair of Pretty Polly 15 denier stockings”.

It seems that if you want an above average sex life, you should nab one o’ they imaginative Suttonians.

Curiously, Sutton also came top of the poll as those who least felt that they were ‘above average’ performers in bed. And the meek shall inherit the moving earth…

Ms Raccoon is planning a short trip out of the aquatic wastelands of the Dordogne. A woman can have too much of riverside life, particularly when she lives smack in the middle of a ten acre field. I did hopefully suggest Sutton, but Mr G was adamant that it would be Marrakech. I admire his optimism, but personally I think he will be lucky to find a camel herder prepared to take me off his hands at all, far less part with their favorite camel, but you have to admire the man’s determination to improve his lot at this late stage in his life….

With that in mind, do any of you have any particular recommendations for Riads that you have stayed in? Restaurants? Desperate Camel Herders?

That picture of adventurous Sutton man does look extraordinarily like John Prescott doesn’t it? Perhaps we should be told.

Did a feature on Riad Timila a couple of years ago, would strongly
recommend it if it’s still up to scratch with the same excellent cook, lovely
place owned by three Brits, great food & service, few minutes’ walk from
Fnaa Wotsit.
Will be in Marrakech again myself next month, ‘nother feature
– interesting place to visit but not sure I’d join the ranks of Brits who’ve
bought up old riads and turned them into groovy gaffs, N.Africa a bit too
volatile for my liking…
As for Sutton, well, this sexual theme is just too
bizarre for words – one of the least sexy places I’ve passed through, indeed
you couldn’t pay me enough to live there, would even prefer Marrakech. Or
certainly the Dordogne – did a feature there too last year, near Sarlat,
stayed with friends in a lovely old farmhouse in Lot et Garonne. See http://tinyurl.com/Dordognehouse

This ageing hippy spent a wonderful couple of months in Morocco in the
early 70s. Where would I recommend

Marrakesh natch
Fez, the old city is like going back 2000
years
Essouaria on the Atlantic coasts – grilled sardines straight off the
boats.
Chechaouen up in the North West (now Chefchaouen apparently)

It’s funny you should mention Marrakesh. I have an errant step-daughter who
lives in the wastelands of the Dordogne who decided to holiday in Marrakesh
one year. There she met rather nice shopkeeper by the name of Ahmed who
showered her with trinkets from his shop. She decided that he was the man for
her, but just before the marriage she discovered that he already had three
other wives and on becoming the junior wife she would have all the delightful
jobs, i.e., cleaning the loo, looking after all the kids, scrubbing and
cleaning.

So just in time she abandoned the idea of becoming a Muslim wife and
returned home to her husband. She now holidays in Blighty; Skegness to be
precise.

So be careful Anna, be very careful, don’t be enticed by pretty beads and
promises from some handsome Arab.

How many camels could you get for Mr G?

A Kennel! You had a Kennel? We used to dream of ‘avin a kennel.

Whaaaat? If we Northerners ‘ad chance o’ luxury ‘honing our appetite by
stoking furnaces in a Dickensian Hell all day’ we’d all be boudoir Tarzans,
Anna. But life is tough ‘ere. Forced to vacate our roofless kennel at dawn, we
trek barefoot the ten miles to t’Mill, turning its dry waterwheel with just
spit ‘n muscle, for a sixteen hour shift. Hanky-panky when we ger ‘ome? Just
time for ‘alf a cup o’ cold soup and three minutes o’ plain missionary afore
it’s back to work.

Off topic, but has the Raccoon Arms received a Paypal refund?

I’m sure all the donors would want Ms Raccoon and Mr G to invest the
windfall in something utterly decadent when you’re both like Webster’s
dictionary.

Bloody Hell! Perhaps we should sue her for a refund! NO I haven’t heard
anything from her at all.

I’ve had 31 red arrows so far for asking a simple question on the Daily
Mail website:

Nice to see OH popping by! Always something interesting to say.

As a middle-aged male, I know the difference between moobs (as seen in my
mirror) and a pert nipple! I still think it’s Mrs Prescott.

If you’re seeing a pert nipple in there somewhere, I think moobs are
not the first priority for your medical advisor…..

Surely it’s Mrs. Prescott?
No visible ‘nads and a right breast swelling
suggest a female.
I see the urban fox has bitten off her right hand – no
wonder she looks miserable.

I am relieved to discover it is not Anna Racoon. I got a shock when I first
set eyes on this blog Anna. Looks like an indignant ?man who found a dead
mouse in his soup, as depicted by the DM. He got into his gt gran’s flimsies
by mistake, for the indignant of Sutton photo to be taken.

La Maison Arabe owned by the charming Prince Fabrizio Ruspoli. Tell him I
sent you and champagne will be waiting in your room.

At that price I’d want a complimentary solid gold twizzle stick in
it!

John Prescott is actually modelling the proposed uniform for the newest
idea in cruising, back in the Sixties.
http://atlantisevents.com/

Hang on a minute Anna, I’m sure I have a camel somewhere.

He may have found it in his lasagne.

You must eat here

We golfers are oft maligned yet which other sport offers the opportunity to
wander the most scenic parts of the planet and be totally accepted by the
locals with but a simple nod and a waft of turf? The best bit about golf
though, is hanging about with your chums without the requirement to talk to
the boring blighters!

Have fun in Marrakech, I hope it’s delightful.

Stayed at Riad Ineslisa in December. Deliberately chosen as small, with
only 4 guest rooms. Enjoyed ourselves: staff very helpful. One night, you must
dine at Dar Zellij: lovely restored riad, now a restaurant. Ambience and food
delightful. Jemaa El Fna is within easy walking distance of Riad Ineslisa. If
feet are tired at night, catch the No.2 bus back home — or within a few yards
thereof, anyway. (Oh, and Dar Zellij is a short way down the alleys from Riad
Ineslisa.) Marrakech was one of the best holidays we’ve ever had. Enjoy!