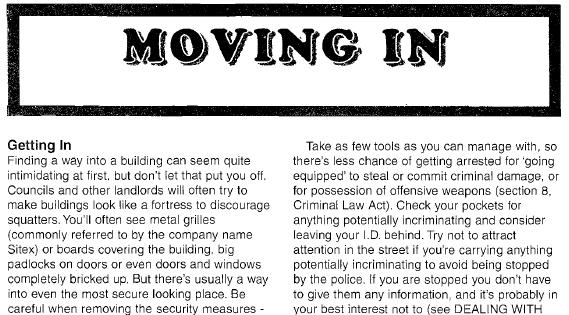 Just over a month ago, Squatting in a residential premises became a criminal offence under Section 144 of the Legal Aid Sentencing and Punishment of Offenders Act (LASPO) 2012. We have been subjected to a series of misleading media reports.

In the first three weeks weeks, the Squash Campaign – “Squatters Action for Secure Homes” – managed to find a grand total of 14 people who had been arrested under the new law, which equates to a couple of hundred or so per year.

This is a slight contrast to their report “Can We Afford to Criminalise Squatting” attempting to rebut the impact assessment brought forward by the government as part of the legislative process. The Government suggested that between 680 (low estimate) and 8400 (high estimate) people would be brought into the Criminal Justice System under this law, with costs being up to £25m over 5 years.

Squash suggest that the actual cost will be between 12 and 40 times higher than the ‘high’ estimate above, partly by suggesting that a lareg proportion of squatters will have to go through a full “street homeless” rehabilitation programme at a cost of £25k per person.

Our calculations for the most probable scenario (including costs to CJS, housing benefit, and rehabilitation services for rough sleepers) puts the true annual cost of
criminalisation as between £63.2m and £158.1m annually. Over five years, this amounts to a bill of between £316.16m for a low population of squatters, and
£790.39m for a high population.

£790 million is – inevitably – the as-exciting-as-possible figure which has been fed to, and duly reported without any real challenge by, the media, for example the Guardian here, here, and here, the BBC. Even Housing Professionals seem to be swallowing it as a basis for conversation.

Those 14 cases may not be the full number once authorities across the country begin enforcing the new law, but it is also at a time when media attention is devoted to these cases. A suggestion that this will increase by 40 or 50 times to the best part of 10,000 cases a year is, shall we say, a little unlikely.

For now we have high profile cases featuring in the media, such as the atypical family in Wales who have been squatting for 11 years, and paying Council Tax, where the property owner is attempting to use this new law having failed to follow a civil process through to conclusion. My reaction to that one is that the owner should have granted a rental tenancy 10 years ago.

I’d suggest that the Squash Campaign information is simply manufactured sound and fury signifying very little, which will be forgotten in a year or two, and that the main benefit of the new law will be to cement a culture change, as exists in Scotland where squatting is a criminal offence already. Before long we will ask why we waited so long before doing this.

This is an account from Glenn Ackroyd ofthe National Property Group, illustrating the more normal use of the new law.

In this case, the illegal occupier – who was likely to have been a ‘guest’ of the previous tenant who had stayed on, been evicted via a Court Order for Possession, then broken back into the secured property – came up with a series of ‘reasons’ why he could stay, as excuses to frustrate any action.

The new law broke the deadlock.

Squatters – One word that fills a home owner and landlord with dread. Well, after 20 years of dealing with possession claims, I can lay claim to the “Squatter From Hell” as my most recent challenge.

Here is the background. We’d inherited a property for which another agent had found 3 tenants. At some point they had invited in a guest. The guest wanted to be added to the tenancy, which we were happy to accept, subject to a new tenancy including all parties. This did not happen as the 3 tenants all gave notice to leave. On move out day, the tenants duly left – but the guest refused, claiming he had nowhere to go…. As he was invited in by the tenants, in law, he is was not classified as a squatter (I won’t bore you with the complexities!). Our in-house legal process kicked in and we duly obtained an order for possession. The guests position was set out in the claim. He did not make any representations.

He still refused to leave, so a bailiffs warrant was issued. Come eviction day, he remained, claiming that the court order was flawed because it named the original tenants, but not him. This was because he was not a tenant, but the order also applied to all other occupiers.

The bailiff ultimately called the police and he was escorted away. The locks were then changed.

A few days later, I attended at the property. I walked upstairs to be confronted by the “guest” – He’d re-entered! He was later to tell the police that; “after passing the property on the way to the library he saw an open window….” Yeh, right.

After asking him to leave and refusing, I called the police. The guest then tries to baffle the officer with details on how the court process was flawed, how he can stay and that it is a civil matter that needs to be decided again by the courts….

After listening to both sides – and confirming with the station that the Possession Order was all that mattered, the officer said that if he did not leave, he’d be arrested for breach of the peace. The guest calmly sat down and said he was being very peaceful and not causing any damage.

Frustrated the officer took me to one side and said that there was nothing he could do!

Not so! I pointed out the new law relating to Squatters (section 144 of the Legal Aid, Sentencing and Punishment of Offenders Act 2012). Basically, after the original eviction, his re-entry was that of a squatter which was now a criminal offense. This law only came into effect on the 1st September 2012.

It took an hour for the officer to get the okay from the Desk Sergeant as they needed to check up on the full details of the law. This was the first case for Merseyside Police. He was given the nod. The squatter was given one last chance to go voluntarily, which he denied and was arrested.

I then spent the time arranging for windows to be made secure and the services to be turned off – not easy at it was now 9.30 pm. We also had to feed the squatters pet rats and make sure that they were watered.

After that – preparing a police witness statement and home for 11pm!

The final outcome – Following arrest he admitted the offense and accepted a police caution.

The landlord – well he’s nursing thousands of pounds of lost rent and an even bigger bill for damage to the property. He’s also regretting the day he choose a letting agent who did not thoroughly vet the tenants and get a home owner guarantor.

Problems currently obscured by the ‘buffer’ of squatting remain, including that street homelessness can be ignored to an extent, long term empty-homes, unblocking the housebuilding jam, and releasing more land for housing.
Changes in law and strategy will doubtless be needed, and the law will be refined in the Courts, but I think it is starting to work.

The police – even front-line officers with many years’ experience, are all
too aware these days that even the whiff of anything which ‘troubles’ the poor
disadvantaged class will provoke screams of outrage from the Toynbees (and
other assorted loonies) of this world. They are further aware that their
senior officers – who have usually been ‘fast-tracked’ in promotion ‘cos they
have a 2:2 in Creative Toilet-Roll Decoration or some such life-enhancing
skill – will throw them to the dogs at the drop of a hat and then cry
crocodile tears for weeks afterwards to the Grauniad, the Beeb and any other
collection of limp liberal-lefties & luvvies who will listen.

We have the police force which the masses have voted for!

So, once again, the police have to be persuaded to do the job that we pay
them for?