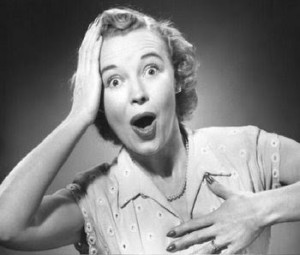 âThere was a lengthy period of time, during which, thanks to the inimitable Thaddeus J Wilson, Ms Raccoon was the top search result for âReverse Dutch Steamboatâ. I have long since forgiven him.

Many and varied were the commentators who arrived from around the world, keen to learn more of this mythical sexual practice whereby, ahem*, another person laid claim to your sh*t before it left your corporeal property, so to speak. Letâs not go any furtherâ¦.!â

Now, I have admit that Madame La Raccoon, being of broad mind and sharp wit, rather enjoyed this unwanted notoriety, and casually hinted that there is nothing wrong with a bit of ambiguity, it being good fun and good for the âratingsâ. This has set me to thinking what inappropriately or ambiguously named blogs and posts there are, or might be, but which might disappoint those in search of âstronger stuffâ.  Here are a few suggestions, some real, some imaginary.

Who gets the wet patch?

A campaigning blog written by âAvian Floâ, complaining about the over population of the south east England and its demand for water, with the adverse affects on natural wetlands and bird life. (Although Google it and you may get directed to a charming conversation at the Cosmopolitan magazine websiteâ¦)

Scottish schoolchildâs Una McTweetâs daily blog dealing with the inadequacies of both the quantity and qualities of school food, especially porridge. Recently in the headlines when McTweet (aged 7) was summarily sentenced to three years hard labour in chains by North West Lothianâs Provision of Public, Democratic and Diversity Services Committee for âbringing Socialism into disreputeâ. Also an inelegantly named rock band, apparently.

News and views on Crufts and other dog shows by a grammatically challenged cynophilist known only as âThe Muttâs Nutsâ. Sponsored by the Korean Embassy.

Slightly out of date film review by one âJames Whaleâ.

Meet Swingers In Your Area Tonight

Social and dating site for golfers. Login, post a picture of your 9 iron and Pringle sweaters in the box provided, and off you go.

Spanish policeman âComisario Gadgetâ blogs about his investigation of donkey riding smugglers in AndalucÃ­a and the effects of out of date paella.

Sex on the beach

An insight into the world of âScuttlersâ, Victorian street gangs who made Mods and Rockers look like Jehovahâs Witnesses. On this very site, and from your author!

And finally, last but not least, it had to happen, it just had toâ¦

Oh yes! The official site of the âscuba diving schoolâ in the âpicturesque villageâ of Muff, Donegal. And yes, it really does exist:

Right, over to you Raccoonistas. More suggestions, real or imagined please?

Excellent stuff. There really is nothing to compare with a good innuendo,
as my Italian friends say.

Better get a move on love,77 and counting

This reverse dutch steam boat is it that red olympic logo thingy?

Iâll tell you when youâre older!

Some time ago, it may still exist, there was a gun club near Halifax
called, if I remember rightly, âThe Cock, Ball, Nipple and Touch-hole Clubâ â
all apparently components of old muskets. Or so they said !

I use a hot glue gun to fix my piles. Piles being the archery term for the
pointy bits at the front of an arrow. As for âknocking my shaftâ I will leave
that to the fertile imagination of the inhabitants of the snug.

Members (snigger) of my profession will be well aquainted with screwing
machines â devices used in the manufacture of bolts and other threaded
fasteners, disappointingly. Itâs also true that such things as piston rods
reciprocate in glands, which must of course be well lubricated.

Fudge Packing! The travails of a small team of cardboard-box folders when
new automated sweet-wrapper manufacturing machinery threatens to make them
redundant.

Hard Sports â how to play golf on a difficult links course.

Fans of âISIHACâ will know that a perfectly innocent double -entendre
always follows the statement âSamantha has to go nowâ¦â
http://www.ivorysky.com/isihac/index.php

Tame stuff compared to the above, but every time I drive through Guilford I
see the estate agents office Gascoine Pees and wonder.
And then, a bit
north of Valencia is Peniscola, on the outskirts of which is Penis garden
centre, right by the highway.
Endless teenage sniggers from Annette Mills
(I think) and Muffin the Mule.
Finally the lovely SA guy who did naval
service and proudly told us he was a seaman gunner.

I once saw a lovely book entitled âSex in the Gardenâ in a secondhand sale.
Unfortunatly I wasnât quick enough and it was bought by someone in front of
me. It was of course about plant husbandry!

Seaman Staines â the site for Captain Pugwash fans anxious to know when he
last went down below to Roger the cabin-boy.

I seem to recall a shipâs Master named Bates had a small part in âCaptain
Pugwashâ.

Many, many years ago, there was the naive genuine advertisement âMrs
MacGregor gets her oats at the Co-opâ

Slightly OT, but I have been waiting to post this for 40 years â¦ In Leeds
when Ah wor a nipper like, Leeds buses carried advertising above the inside of
the windows. One was for a delightful-looking gentleman named M A Hamid, who
described himself as a âHypnotherapistâ. On every single copy the word was
divided into three by biro lines. I canât see the word ârapistâ today without
thinking of Old Hypno, The Rapist. Childish, I know. Thank you for
listening.