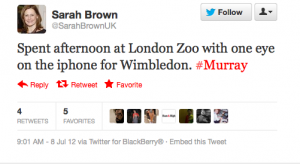 That is one Hell of a way to describe your dear husband, Madam, we are indebted to you……

What is it about the arrogant and self-obsessed that they should imagine
for a nano second that we give the remotest toss about their visit to the zoo
or the fact that they are watching their iphone?

Couldn’t agree more, but that is the way of the world today, was shown
some tweets that a friend of mine had received via one of these
“friendships” made on Facebook , there were several describing his breakfast
contents and the time it was consumed WTF.

That should wind up the Monocular Discrimination Society a treat.

That brightened up my Monday morning.

Visiting time at the Plankton enclosure ?

English is a dangerous language.

Oh, dear Anna, you tempt me so much to be more than wicked. It’s a pity
that she wasn’t spending the afternoon at……..no; there are limits!

Cruel but, what the heck, funny.

First chuckle of the day.

Anna
That is very naughty. And very cruel. And very funny!
G the
M