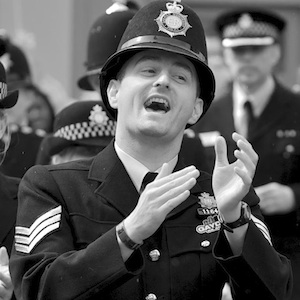 When a Rozzer’s not engaged in his employment
Or writing up his pension plan
His capacity for spouting doggerel
Should be just as good as any other man
His desire to rest he must smother
With waxing lyrical still to be done, to be done
Taking one consideration with another
A policeman’s lot is not a rhyming one

With waxing lyrical still to be done, to be done
A policeman’s lot is not a rhyming one

With waxing lyrical still to be done, to be done
A policeman’s lot is not a rhyming one

With waxing lyrical still to be done, to be done
A policeman’s lot is not a rhyming one.

With abject apologies to WPC Gilbert and DI Sullivan

So good to have ypu back on top form!

This story just sums up the modern police i’m afraid.I bet a statement will be made soon by the new commish saying what valuable work the diversity section does.I also predict this silly little competition will be quietly dropped.

PS Please help me with a rhyme for “what a complete waste of space the whole diversity industry is!”,i’m struggling………

I find it funny the subjects of this poem would also represent the top tier of most councils housing waiting lists…except the families of policemen.

Families of plod do not need housing waiting lists. Overpaid, underworked. Last seen outside Tesco getting “stuck into” wheelchair users. You will find it is far easier to establish a police state than to dismantle one.

Stay behind after class and write “I troll because I am deeply insecure” 500 times.

I think you will find “except families of policemen” to be an unambiguous statement.

I did not say they would be on council list. I specifically said they would not be. Back to CIF with thee.

It is true that the policeman’s lot is not a happy one. Surrounded on all sides by unthinking idiots like G.R.E.A.T, blamed for all the ills of society, assaulted routinely, hijacked by the Diversity mob, prevented from ‘doing the job’ by ill advised politicians, eager for their place in history and drowned by them in a sea of bits of paper, AND… to cap it all (and in common with others – that thought that a contract of employment was, well… a contract of employment i.e. agreeing to serve ‘X’ years in anticipation of ‘Y’ pension, by making ‘Z’ contributions, but…) mid way through, unexpectedly and unforseeingly taking a kicking in the back pocket, in the ludicrous expectation, made by those self-same politicians that by doing so, the Boys in Blue, amongst others, would somehow ride to the rescue the economy…. Fat chance.

Unless you had tried being one, people just could not understand. It is tough enough ‘out there’ without Denise Milani dishing out her nonsense, well meaning though it probably is but… the fact that there IS such a competition, does that not also fly in the face of the fatheaded G.R.E.A.T’s comments about ‘getting stuck into wheelchair users outside Tesco’s’.

Can’t have it both ways. Either the police are all facists, according to some here or they are nitwits according to others, by trying to act empathetically towards minority groups.

@ G.R.E.A.T: ‘Ciaran you are still a cock…’ LOL!! And, apparently, suffering from a split personality disorder!!

Ciaran you are still a cock under whatever name you call yourself.

I asked you yesterday outside what Tesco’s this terrible incident happened.You seemed to have ignored me.I have trawled the news network for this story and cannot find it.I assume like all your other crap it a figment of your vivid imagination.

Once again- how many people died in the police cells today?

I’m in plain clothes, I wear high heels, suspenders and a bra…
I wish I’d been a girlie,
just like my dear Papa.

Jade’s in CID and she’s okay….she mongs by night and sleeps by day.