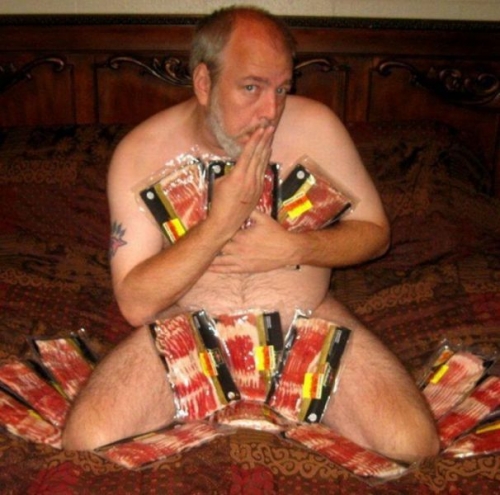 An eerie silence in the Raccoon bar, no e-mails from the prudish Thaddeus telling me I’ve shocked him yet again, nothing from Gildas threatening to put me on the naughty step once more – not even the spent brain of a stray troll left alive.

It seems Mr Camping was right this time, the end of the world has come and somehow I’ve survived it, as has Mr G – that’s another notch in the bedpost tally of ‘things I have survived’.

Well, if we have the world to ourselves, I might as well start acting as though I do – and I’ll begin by putting up the favourite Raccoon Pork in the bar. I’ve often wondered whether I would, in reality, climb over Mr G to get to this gentleman’s pork; I start every day by salivating over his picture on my desk top. I suspect I probably would, but only to grab the pork and scramble back where I belong – Mr G is the master of the bacon butty.

Ironic really, that I should be the one to survive Armageddon. It seems only yesterday, four months ago actually, that the blessed Dr Sebastian dropped the proverbial piano on my back and announced that my days were severely numbered. He did, in truth, go on to say that there was a ‘get out clause’, but I didn’t hear that at the time.

They say that at ‘that time’, your life flashes before your eyes and your mind turns to your nearest and dearest – perhaps it is supposed to, but it didn’t. Even as Mr G trotted out every hopeful, positive, phrase he could think of, my mind was elsewhere occupied. On the attic stairs of a dingy hallway in Clevedon.

‘Holy shit’ I thought, ‘my bloody Will’. An English Will, still legal in France for another year, I’d added a codicil to it some time before and never given it another thought. Now the ramifications of that codicil roared before my eyes. ‘Notaire’ I yelled, ‘I have to get to a Notaire’. Even as Mr G tried to placate me and persuade me that I was very unlikely to expire before lunchtime, I press ganged him into action as a chauffeur. We arrived with minutes to spare before the French witching time of 12pm beyond which nothing occurs, even life or death matters, until Le repas has been partaken.

I had visions of the English system, whereby you dictate a Will, it takes weeks to type up, more weeks to conjure up another appointment, between the brief’s golf sessions, with your Solicitor to ‘peruse the document’ and then finally you get to sign it. Here in France, land of bureaucracy on steroids, it could take six months! Panic stations!

Amazing, in the land where you can’t even cancel your insurance contract without sending a recorded delivery letter two months before the expiry date – just not paying up is nowhere near enough! – quoting the correct law, in French naturally, making a will is simplicity itself.

You can it seems, tear off a strip of your wallpaper, as you lie gasping your last on the floor, and in your own handwriting, and in your own language – surely the only document in France that would be accepted in anything other than French! –write out your last will and testament. So long as you sign it – no witnesses required, it is a valid will. Five minutes later I had a valid will, registered with the central registry of such things in France. Cost? 50 Euros. (and the Notaire could go off to lunch!) Stunning.

You see, what I had forgotten, was that in a moment of injudicious euphoria for the future, I had added a codicil directing my aunt’s bequest to me, now a six figure sum, to the Libertarian Party in the event that something unspecified should happen to me in, ooh, I don’t know 20, 30 years?

Now I was distracted by a ghastly vision of the Fat Fraud in Clevedon bouncing up and down the attic stairs like Zebedee on speed with a maniacal grin on his face – clutching a cheque for more than his bloody house is worth shouting ‘it’s all mine, all miiiineeee!’.

Truly you can have some nightmare visions as your ‘whole life flashes before you’.

Once I had calmed down, I started to take in Dr Sebastian’s ‘get out clause’. It didn’t sound too bad, an operation followed by this Chemotherapy thingy I’d heard about. I had no idea!

I would never have said this before the end of the world, not with all those people listening. 26,200 people one day – can you imagine trying to write knowing there could be that many people out there waiting to criticise? Now it’s just me and an empty cyberspace, I can speak my mind.

Chemotherapy is bloody terrifying. There you are, feeling pretty well normal, and some nurse has hooked a bloody great syringe of bright red chemicals up to you, and she is grinning and saying ‘Prêt‘ ? You have to actually say ‘Yes’, knowing perfectly well that she is about to flood your bloody with enough poison to fell Jonah Lomu, that will take you to the ebb of life, that you will have to watch drip into you over the next three days, and you are supposed to smile back and say ‘Yes, please’.

The mental battle is far, far, tougher than anything you undergo physically.

You have to believe that these people know what they are doing, that they are not fraudulent shamans – I mean why not believe that bungee jumping off Clifton suspensions bridge with the rope round your neck is the best ‘cure’? It’s just as illogical. I struggle with this notion every time I go into hospital.

Keeping up the ‘bombast’, the bullshit, the bravado, is vital – because no one will let you tell them that you are scared witless – keep positive they say, you must keep positive……and this is the place where I keep up the bravado – behind the bar of the Raccoon Arms.

What am I going to do now that all my customers have met a grisly end, cyberspace is empty? Pity really, I was planning to have a week long free piss-up, a ‘drink the pub dry’ competition, when it was all over.

Talk to the wind I guess. I can’t give up now, not with Mr G and I being the only ones left…

Another Bacon Butty I reckon, and keep shouting into cyber space. It’s actually quite cool having the place to myself, I can do what I want.

I wonder if I can still do a headstand? Whoops! No knickers on……

Having just enjoyed a bout of high dose chemo and the aftermath of feeling
terrible, the worst part is that having had my head shaved in anticipation of
all my hair falling out, most of it is still there and now I’m condemned to
wander around looking like a villain from Eastenders for the next three
months. Bloody freezing too. I hope your Barnet is still firmly attached Anna.
Procyonids need to stay warm. Get well.

Glad to hear you are doing well Anna, first thing I did too when I was
diagnosed was update my will. It comes as quite a shock to realise it might
atually be needed! I was lucky enough not to need chemo, at least not yet.
good luck.

O !  The World has ended and I’m imagining myself at a computer
putting a comment on the blackboard at the Raccoon Arms.  Funny thing is
… there are other comments on there.

Or am I imagining them too ?

We are all out buying beer and popcorn ready to watch the BBC parliament
channel on Monday so we can isolate the goodies from the anti-democrats. We’ll
return to consider the missing knickers later.

The Fat Fruad looks rather good in his bacon garb, but I’m wondering where
he’s hidden the sausage.

Despite it being one of the most delicious tastes (now turtle is a
protected species), 2 out of 3 Abrahamic religions (allegedly) don’t eat
bacon, which just goes to show which is the true one!

I wonder if I can still do a headstand? Whoops! No knickers on……

Do the cuffs match the collar, as it were?

Taking the Michael now aren’t we. Neither collars nor cuffs survived the
last cull!

So they do match then!

Oh dear. I seem to have provoked a raccoon!

You do know that the ‘best bacon butty’ was to be had on the Dock Road
don’t you? Sadly the cafe closed down a few years ago but the secret of the
‘best butty’ was good thick white bread, lathered with 100% butter and then
the bacon. Yep, crap for your arteries but heh it was wonderful in the
mouth…..the pub was saved for lunch onwards!

In the light of the above, I’m not entirely sure where I’m writing this
from; however, as a self-confessed apocoholic and avid fan of
end-of-the-world-as-we-know-it fiction, I should point out that convention
requires you and Mr G to:

a) wander round in a state of amazement that you are still here,
then

b) become distinctly – but photogenically – unkempt and indulge in a
montage of previously forbidden, unattainable or self-indulgent activities
(possibly involving the Mona Lisa, Chanel’s window display or or vast
quantities of crispy bacon) before finally

c) achieving a state of enlightenment and a philosophical acceptance of
your new status, accompanied by a mellow voice-over, soft focus and a nice
sunset.

It is usually de rigeur to produce some form of archive as well, for
the sake of the narrative; fortunately you have the perfect one in place
already.

Bonne chance – and watch out for Triffids!

The world is not over. Just dozing.

Heck of a way to take your mind of chemotherapy. God moves in mysterious
ways but as blessings go, you have to admit it was a helluva disguise.

Argggghhhhhh! You lot were out there, and listening, Oh – My – God……….not
watching as well I hope!

I was thinking of the codicil rather than Mr October from the Butcher’s
Benevolent Society Calendar.

Still, there’s always someone worse off than yourself. That poor man
has lost both legs at the knee and all his clothes. What is he going to
wear if he can’t find more bacon on yellow-sticker? He’ll be reduced to
posing in little more than the string bag the satsumas come in.