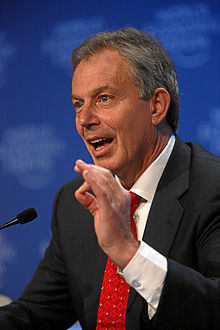 Let us examine the record: unprecedented electoral success for his party; massive approval ratings; vast donations to the party. An inspired political strategy that appeared to marry conflicting goals. A media management strategy that still defines the “media narrative” today for his opposition. There can be no doubt whatsoever that despite whatever else can be laid at the feet of Tony Blair, he was a consummate politician, someone who (unfortunately) has totally changed the face of British politics forever.

Even his flaws have brought benefits, exposing the venality and moral flexibility required by a politician for us all to see.

And yet, at this year’s Labour conference, this man was booed. Think about that. The man who, more than any other, gave the Labour Party 13 years at the helm to shape society into what they wanted it to be, was booed. The man who turned Labour from a useless, unelectable party into an electoral juggernaut that survived an unjust war and dozens of other, lesser events that would have toppled lesser governments.

It was, perhaps, inevitable that Labour would resent his success, because no modern political party (apart from possibly the Greens) resents and despises success more than Labour does. It was inevitable that the dour, unelectable Scot would force his way into the leadership, representing as he did the mean-spirited nature of those who would live off the success of those they despise.

And so we come to this curious, unexpected sensation. Something that I simply never considered possible.

I feel a twinge of sympathy for Tony Blair.

Well, I’m quite impressed by Blair’s achievements in his chosen carrer.

I supported his war, rightly or wrongly. So I can’t condemn him for
that.

Nobody gets to the top in politics without lying to the public, so what’s
new?

Tony Blair was arguably a more effective Tory Prime Minister than David
Cameron is. I can understand Labour voters being grumpy, are there many of
those in here?

I can understand Labour voters being grumpy, are there many of
those in here?

I believe there are a few spent carcasses on life support in the snug,
but haven’t seen a healthy one around here since The Third Estate went belly
up…….

Oi!I wouldn’t be seen dead in a Snug!

Blair was and is a dangerous fantasist. I take your point re. the simple
ingratitude of the Labour party, but there’s nothing new there. I have a
simple rule; if anyone expresses ‘disappointment’ at the outcomes of New
Labour, this rather suggests that they voted for them at least once, in which
case I feel no need to ever speak to them again.

Given that he is totally insulated aginst reality I doubt he is losing
sleep over the matter; indeed, I doubt he is still even a member of the Labour
Party.

So don’t feel sorry for him; instead feel sorry that he was ever PM in the
first place. Since his (and the one-eyed snotgobbler’s) arrival, nothing in
this country is better and most things are immeasurably worse. But they are
not bad enough, hence the booing.

The whole sorry crew should be impeached.

What goes around comes around, I would’nt admit to twinges such as those,
you may be sectioned.

Your real name is Alastair Campbell and I claim my five pounds.

If not, you need to find out who is putting LSD in your coffee.

I thought I felt a twinge, but it was only wind.

I second what Patrick Harris said (except hanging’s too good for the
corrupt war criminal).

Such sympathy will soon subside, with the unfettered sense of rage
resurfacing, worry not…

When you think of how much goodwill that man received from millions of
people in May 1997, it does make you wonder if he was laughing his balls off
at them during the ‘fake spontaneous demonstration’…

That he elicits sympathy from you illustrates his ability as a politician.
Its magic.

Rubbish! Surely your are mistaking the twinge for another gout attack. Open
another bottle, you will see things far more clearly.

I gather that a former schoolmaster of Blair appraised him during his
schooldays as a very fine actor with no great gifts in any other field. From
this, I posit that successful con-men and some successful politicians need
many of the same attributes.

Is Britain a better place for Blair’s premiership? Doubtful. Is the world a
better place for his work post-premiership? Equally doubtful. So what is it
that causes him to be described as one of the finest politicians of his
generation? Smoke and mirrors, perhaps? Media savvy?

Yep – just goes to prove what f****w**s the people who vote Labour are.

“I feel a twinge of sympathy for Tony Blair.”

Got over it yet?

The time to feel that ever so small twinge of sympathy is when, after being
found guilty of crimes against humanity and war crimes, the trap door opens
and the twat take the final fall.