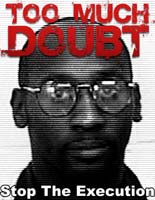 I was reading about the terrible case of Troy Davis, a black man accused of killing a policeman in in the US:

The federal court that finally reviewed evidence of Davis’ innocence agreed “this case centers on eyewitness testimony.” Yet that court put to one side the fact that seven of the nine witnesses at the trial have now recanted, and new witnesses have implicated another man. The court did so while failing to carefully examine how eyewitnesses ultimately came to identify Davis as the man who shot a police officer intervening in a fight at a Burger King parking lot. The Troy Davis case—which raises a wide array of flaws in our death penalty system, our post-conviction system, and the politics of criminal justice—is thus also a case about malleability of eyewitness memory and police misconduct.

This case underscores my primary argument against the death penalty: cases are rarely closed on incontrovertible and irrefutable evidence. The evidence of eyewitnesses is clearly unreliable and subject to suggestion. In this case, seven of the nine witnesses have recanted, and they actually have a confession from someone else!

It underscores how brutal and unforgiving the state can be when one of its own is threatened. Despite all the extenuating factors, the state is still determined to kill a potentially innocent man pour encourager les autres.

But that is not the point of this post.

Almost inevitably, e-petitions and campaigns have sprung up to try and convince the state of Georgia not to kill a man based on the flimsiest and most worryingly poor evidence. And there is nothing wrong with that, but I often wonder if the current e-petition craze where “we call upon to Grand Poobah of Franjabistan to behave in a more civilised manner” (or whatever) is not like paying a professional penitent to pray on your behalf to save your soul from Purgatory.

But for all that, there is little effort required of the petitioner. A minute of your time and your soul is salved, an act of penitence has been done and you can move on and forget that in a couple of hours, a man who may, but also may not, be guilty of a senseless crime will be dead, executed by the state, despite the gravest of doubts about the soundness of his conviction.

If, one day, Troy Davis is proved innocent and posthumously exonerated, will you even remember that you signed a petition protesting his execution?

(Having said all that, please consider signing the petition. It can’t hurt.)

UPDATE: The Georgia Clemency Parole Board is blocking Amnesty International’s emails, so a workaround is here.

FURTHER UPDATE: Brendan O’Neill has a similar but distinct feeling about this.

“In July 1988, Davis pleaded guilty to carrying a concealed weapon; he was
fined $250 as part of a plea agreement in which a charge of possession of a
gun with altered serial numbers was dropped.”

“When there is the SLIGHTEST doubt …”

There was no doubt at all in many American minds…. he WAS black!

Well, he has been executed. I am in shock! SHOCK, I tell you. When there is
the SLIGHTEST doubt – and this case there’s more than that – execution,
whatever are your thoughts on it, is OUT OF THE QUESTION.

A quote from some person eager to kill this man,

“The good news is that we live in a civilized society.” Speechless.

That doesn’t even carry the title of irony. But people like this get to
decide.

A perfect example of why the death penalty is not the clean, clinical end
of a matter many would fancifully wish it to be. If nothing else, there is
enough doubt over this man’s guilt to suggest the actual killer would still be
walking around free after he had/has been executed.

I will remember that I signed this Petition, and again this morning there
is another Petition. I have signed that as well.