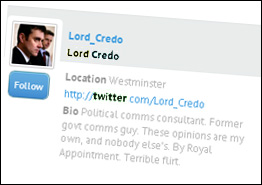 This week, there was a bit of a Twitterstorm when Twitter user Lord Credo, who posed as a spin doctor for the Conservative Party was revealed to be something of a charlatan.

Now, it’s not exactly unusual for people to have an online persona, but it’s very rare for people to maintain the persona when meeting up in real life.

And Credo managed to bluff professional journalists as well as many “lay people”. Just think about that: the very people that Credo was supposed to be “briefing” were fooled by him. People whose very job entails a greater degree of bullshit detection than ours do by default. If even trained bullshit detectives were fooled, what chance did the rest of us have?

I fully admit it, I was completely fooled.

Part of it was that he had the “supporting cast” of journo’s and other people that gave him credibility. He’d been interviewed by the Huffington Post. His tweets were just sufficiently opaque and his “confidential asides” were quite plausible.

He fooled a lot of people. It’s bloody easy to be snide and sniffy after the event, but the truth is, very few people were openly skeptical (as far as I could see, anyway) about Credo. His inability to stick his hand in his pocket and buy a round were such a standing joke that I never questioned it.

Casual references to his new job at Sky leading him to upgrade his Jag to an Aston were done with just the right degree of self-deprecating smugness.

All this could have been perfectly harmless, really. We’d all be shamefaced and smacking ourselves around the ears for a couple of weeks, but no harm would be done. You could argue that obtaining beer by deception was ungentlemanly, but it’s not the end of days.

But harm was done. People have been lied to, have had money “borrowed” from them, people have fed him and housed him out of the goodness of the hearts and have now got to live with the consequences of his behaviour. This is bad enough.

Something I find completely reprehensible, though, is people now making disparaging remarks about those who were taken in. Nobody likes to have their judgment found wanting. But to be ridiculed and pilloried for being kind-hearted is unacceptable.

The recent riots in London and elsewhere has shown twitter at its best, with thousands raised for non-twitterati total strangers.

The aftermath of CredoGate shows twitter at its worst, with uncharitable comments and a complete lack of even moral support for the victims.

And if your first reaction is to check those bona fides, what does that say about you?

Dammit, Obo, that must be an automatic avatar from before or something. Can
it be deleted?

Thanks for commenting – much appreciated.

Which avatar are you questioning?

If it’s the one on your comment it will be the Gravatar associated with
the email address you added when you commented, and you can update it at
Gravatar.com.

Or I can change the email address if you like to a dummy email address,
which will give you a computo-avatar.

Email address bodged so that Gravatar can’t find you.

Obo, I’ve read so many (too many) blogs from people who had nothing to do
with this, that it’s nice to see what someone who did know Credo (and me, sort
of) makes of it all.

I left Twitter because of the horrible, horrible abuse I was getting. At
first, people were saying if I didn’t go public about what he did to me I was
effectively covering for him, and then, when I did start to be a bit more
forthcoming, I was accused of attention-seeking. I was also attacked by people
who thought I was in on the whole thing, which I wasn’t (although given the
contents of the original unedited ‘exposé,’ I can’t say I blame them). People
whom I trusted turned on me, and some of them had my phone number. I had to
block a couple of them from being able to text me.

So, not only did I have to try to process the fact that my boyfriend had
fled the country and was, amongst other things, married to someone else, I
also felt I had to try and explain and defend myself. And then I thought, f*ck
this, I don’t need this, and I don’t owe these b*stards anything.

One lovely, lovely girl who was taken in by Credo has been given a really
hard time by other Twitter-users, and I imagine this is the sort of thing
you’re talking about. Why? What’s the point? It’s neither big, nor clever.

As for me… I spent most of last week being treated for shock, after
suffering panic attacks which led to vomiting and blackouts. I had to be
assessed by a psychiatric nurse, to determine if I needed hospital care.
Yesterday, I had to declare myself homeless and start filling in benefit
forms. I also had to contact my bank and credit card company and tell them
that the person who was supposed to pay half of my bills has fled the country.
Can you imagine trying to make that sound plausible? Anyone who thinks I’m
just ‘smarting’ (Ray) is pretty devoid of human compassion.

I’ve added a link in the “Essential Reading” sidebar to a case of a Twitter
spammer / hoaxer / harrasser who was exposed via Twitter.

The way that some people have treated (tweeted?) those adversely affected
has not been nice to see. Anyone can be taken in by a confidence trickster;
the response should be compassion not gloating.

Fair play for saying you were completely fooled, after one twitter exchange
with Credo I wasn’t I guessed it, but then I wasn’t aware of the Huffington
interview or the journalists taken in by it. Had I been I’d probably been less
likely to spot it.

What has narked me a bit is that 2 or 3 respected tweeters seemed to have
thrown their toys out of the pram and have abstained from twitter seemingly
because they didn’t like the expose of being taken in by this, that it somehow
rocks their sense of perceived intelligence… Pah!

I salute you for taking it on the chin.. Hell I was even taken in that
Louise Mensch was a real MP, we are all fallible….

I follow someone on twitter who was apparently taken in by Lord C. For her
own part, this particular tweeper works – by way of flattering tweets,
smiley/winky faces, hard-luck stories, and DMs — to attach herself to people
who are well-connected, or famous. Human vanity ensures that her tactics often
succeed. Using DMs, she trawls for useful information from other tweepers who
she thinks are intimates of the person she’s interested in. Then she leans on
that person to meet up with her (she’s willing to travel the length of the
land for the rendezvous) on her own.She tweets incessantly, likes to be seen
as an ‘insider’, and invests a great deal of emotion in her links with those
she follows. She’s a sitting duck for a confidence trickster of the Lord C
kind. If you’re this keen to buy into the emotional worlds of people you
really know nothing about, caveat emptor.

I feel pretty clueless too. I don’t think I took any notice of him!

Phew, I’m not the only one then. He must have posted exciting and
tantalising DMs to fish in the unsuspecting. And all this stuff about
meeting twitter people in real life is a bit weird too.

I’d noticed “Lord Credo” on Twitter as a witty commentator, but I’d
never noticed him as a personality.

I’d also noticed “Westminster Pundit” as a blogger who said astringent
and interesting, but not especially unique things.

I’d never read either enough to link the two in my own mind.

OTOH I’ve largely been silent for a year until the last 2 months.

Aren’t all spin merchants by definition bullshit artists that should be
treated with the contempt that deserves? As such they should be subject to the
deepest scrutiny and have a complete check made on their bona fides as a
matter of course.

He certainly had me fooled.

Easily done Mrs Haslam. No comments on your Torygraph blogge. par for the
course!

So – Lord Credo is a convincing charlatan and a bounder, and people were
taken in by his dissimulation. And what about all those whose business is to
make a profession of pretense and finely hone their fantasy-weaving skills in
the House Of Commons and before journos? They don’t just injure the pride of
their victims: they also destroy our personal liberties, steal our hard-earned
cash and – to top it all – get paid handsomely for the privilege..

“Something I find completely reprehensible, though, is people now making
disparaging remarks about those who were taken in. “

I must have missed this…

[Quick check: some people having a go at swindled GF on Twitter, for a
start.]

Are they? I must have missed those Tweets (probably don’t follow her or
anyone reTweeting them).

Yes, that’s appalling. There must be something wrong with people like
that.

Never trusted him, he wouldn’t flirt

I was fooled last year by a certain Craig Colclough and divulged some very
personal stories about my war to him, as I believed like me he was suffering
PTSD – He wasn’t … and I felt sick to the stomach.

I never really got to know Credo – and am pleased about that, now this web
of deceit has caught it’s very creator in it’s sticky tendrils … Those he
stung will smart some – but they’ll move on. Credo wont though and his life
will forever remain a shallow one.

Credo = Latin for “I believe”. Quite apt, really.