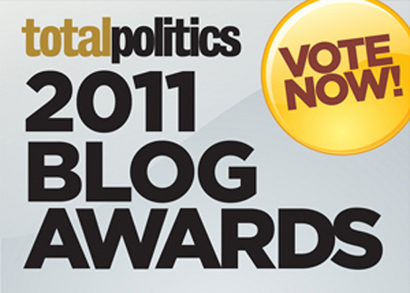 This is the last day of voting for the Total Politics Blog Awards. If you intend to vote, for Anna Raccoon or other sites, you have until midnight.

At this time of year Total Politics Magazine are running the Total Politics Blog Awards blog awards, where you can vote for Anna Raccoon, and some of our individual bloggers.

It is useful to the blogs and bloggers because the list is a reference source for anyone outside blogland, and everyone is lazy and likes Total Politics to write their lists for them.

At annaraccoon.com, we are not aligned to a single political party, and we don’t have legions of voters who vote for us as a matter of course. The party here is an army of regulars in the Raccoon Arms (hic !), who may or may not remember to vote.

So this is a prod – please support the site, preferably in the non-aligned, libertarian, and media categories. You also get to vote for up to 9 others. You *must* vote for at least five sites.

You also have to vote for individual bloggers, and I’d encourage support for our regulars, who all work hard, but I’m not allowed to promote anyone by name.

Here are the rules in full.

Voting opens at 9am on Monday 8 August and closes at midnight on Friday 19 August. Any votes submitted after that will not be counted.

The rules are simple.

Would love to vote for you, but I don’t have a favourite [email protected]

Official reply from Total Politics is as follows:

“The phrase ‘only blogs based in the UK, run by UK residents and
based
on UK politics are eligible’ in the rules for the Total Politics
blog
awards is there to make it clear that blogs that cover the politics
of
other nations are not eligible in this poll. However, it does not
refer
to the geographical location of a site’s hosting. As long as a blog
is
about UK politics, it’s eligible for the awards.”

Okay, so a (hypothetical) blog run by a Russian, based in the US but
focussing on UK politics would be entirely eligible? Or Tim Worstall. Or Tom
Paine, while he was still in China. I don’t have a problem with these.

So why didn’t they just say, in their rules, that “only blogs based on UK
politics are eligible”? Is the other stuff just there because they are paid
by the word?

Does that mean that we can ignore most of their other rules too?

I have not got the foggiest notion

It may mean they want lots of argumentative traffic in their comments,
or it was written by a subbie.

@SBML
It appears they read your emails more than my blog
comments.

Hiya – just cast you guys as my third preference behind ourselves and the
Malpoet. Had yourself, Anna and Matt in my top ten personal bloggers as
well.

I’m not sure on the “UK focused” definitions. TP seems to think we are, and
Guido is, never mind Tuscan Tony and the rest.

On ‘politics’, I tend to define politics as being broader than ‘politics’,
so I’d define each of architecture, maps, what’s happening to my local local,
and the history of Grimethorpe Colliery Brass Band as being political.

AR sits in a number of niches, and it is to the site’s advantage to have as
much profile in each as possible, and I’d defend this sort of exercise on that
basis.

Perhaps we need some political recipes.

I think you have criteria 3 quoted wrong – you have “or”, they state (now,
possibly):

“Only blogs based in the UK, run by UK residents and based on UK
politics are eligible.”

The Raccoon Arms, much though I love it, is based in Provo, Utah, run by a
French resident, and has a much wider base than mere politics.

So that’s Guido out of the running too then as he is based
in Saint Kitts and Nevis.

I didn’t write their rules, or agree that they were sensible!

But St Kitts is just the address of the registrar. The blog is on the
wordpress platform which seems to be split between Plano and Chicago.
Admittedly the Raccoon Arms registrar is, like its server, in Provo.

Liberal Conspiracy is hosted in California (and most of them what run
it certainly seem to be residents of la-la land). Dale&Co does seem to
be in Gloucester.

As a libertarian, I can’t be arsed. A vote like this is almost contrary to
being one.

I don’t look at blogs through the deadening filter of ‘politics’. Rather, I
read them because they well written & express things that I either agree
with or that stimulate something that passes for thought in my head. Inspector
Gadget, The former Ambulance Man, Winston Smith33, World weary detective &
the Jobbing Doctor probably sit on very different parts of the political
spectrum, but I’m more interested in what they have to say about their own
worlds.

Even at 59, I have no idea what the terms ‘right wing’ or ‘left wing’ mean
any more. There are plenty of political windbags who claim to represent each,
but I can’t see a difference apart from the clour of their rosettes. They both
want to tell me what to do & eat my lunch.