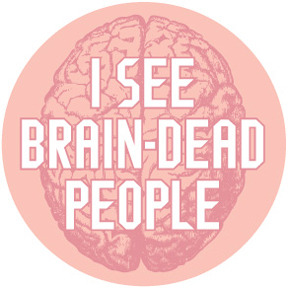 Sometimes I despair. The following is doing the rounds on the left wing blogs to loud applause in the social media. I flatly refuse to link to it.

My comments in red italics.

Over 200,000 people have signed a petition to the government asking that those involved in the disturbances have their benefits removed. The government and local councils are taking this seriously, and looking at means of instituting these procedures.

Many of the liberal commentators have criticized the plans of the government and local councils to remove benefits and evict tenants on the basis that it will “not help them get back on track” or will “increase crime rates”.

They ought to be more concerned about many thousands of people dying of malnutrition, having no shelter, and no access to clean water. There has, so far, been no practical proposal from government on how these people are expected to live.

No access to clean water – where do you think you are, Somalia! There are soup kitchens, bus shelters and public toilets. That should be enough to be going on with.

Now, about the thousands of people who have had their home firebombed, their possessions destroyed, their jobs taken from them, their life savings sent up in flames. Do you not think you should be more concerned about them?

Please copy this message to others, reprint it on your websites, or link to it on facebook and twitter.

92 Retweets – are all your followers brain dead? Don’t’ answer that, I’ve just seen that one of them is Jacob Bard-Rosenberg. For crying out loud – you want to drum up sympathy for the man in the brand new Nike Trainers sitting at home waiting for a polite letter from the council telling him that he may, may, eventually, lose his council tenancy, and he’d better start looking for alternative accommodation; you can’t even offer one word of sympathy for his poor victims who were made homeless, jobless and terrified with no warning at all!

I blame the police for the riots. Why did they shoot a perfectly innocent
gun carrying cocaine dealing gangster? He was a pillock of the community.

If “they” do find a way – which by definition must be a retrospective
change – to deprive these people of the benefits they are currently entitled
to by law, then we are none of us safe.

Who knows what “they” will retrospectively change tomorrow or next
year?

Bad, bad, bad. Awful events should not be used as an excuse for repression.

Go and look at how the Norwegian PM responded to those other awful
events.

That is how it should be done.

Well said, I hate the left apologists, twisting these wrong doings into
something where they can pat these animals on the back and say, there there
don’t worry your money won’t stop, we’ll also try to get it increased because
clearly living off the back of other people is difficult.

Well I say enough is enough, the left have gone far enough in my book, time
to cut them off at the knees.

Joe Public (above) touches upon a very important point with his car wash
example. We’re hearing every day from the young bemoaning there are no jobs
but the answer, surely, is to create your own. Be enterprising, start small
with little capital and graft your way to something better. Money is tight,
there are millions of potential customers out there right now looking to cut
costs… so chaps, get out there and undercut the big boys.

Look, I know its more complicated than that. And its not helped by the fact
that our recent Governments over tax us to pay the massive benefit bills, or
fund the construction of huge windmills out at sea and splurge vast sums on
non-jobs in the public sector. But…

For crying out loud. We’re all in this together and we’ll all go down
together too. However neat and dandy it is to build superb new schools, pay
decent benefits or even fund the very best cancer treatments; we’re going to
have to start getting used to the idea that we cannot afford it. Our living
standards are falling and due to the massive weight of debt left by Brown
& Co, and they’re going to fall a lot further yet. Who ever wrote that
piece quoted by Anna is deluded fool still living in pre-crash 2007.

If these bleeding heart lefties are so worried & so keen to help the
rioters why don’t they offer them a room in their house, or squat, which is
probably more the case?
Surely there’s a thousand of the bleeding hearts
who will at least let these no good scumbags sleep on their living room floor
until they get a job, sort their life out & become a decent member of
society?
Unless they’re worried they will come home to a wrecked
house!!

There is a very real reason why the families of looters shouldn’t be
evicted and its nothing at all to do with lefty liberalism. Its down to
cost.

If the families are evicted, then they will need putting up somewhere and
despite the reasons for their evictions, the state will be responsible for
sheltering them. More than likely in a bed and breakfast, at a higher cost per
family than a council house.

Even when they eventually find housing, its likely to be private rented
housing, which will be a lot costlier to rent per year. For however many years
they reside in the house unemployed.

So eviction is a sanction that will teach the rioters and their families a
short sharp lesson, but in the long run will cost us the taxpayer several
thousand pounds to implement.

Better to have some monetary sanction placed on the families, like being
ordered to pay a percentage of their income into a victim’s fund.

And don’t say the state should cut them adrift, because those lovely human
rights laws will kick in and drag the state kicking and screaming back to
support the family.

Such is the buggered up system we have. Layer upon layer of legislation and
benefit piled on on top of the other, creating a huge social mess.

You could say sweep it aside and create a simpler system, but then
thousands of public sector workers will be out of a job… Social issues are a
lot more complex than a soundbite.

In the past few years a massive industry has grown from virtually nil.

Hundreds of thousands of men & women choose to earn their living from
it.

The industry has expanded, taking business from established ‘household’
names. They do it by offering a superior, personal, service (even though it’s
often more expensive than the automated processes of the Supermarkets &
Major Oil Companies)

There are locations nationwide. Thousands of them.

…is six times larger than the median human income. And “me” is correct,
using JSA as a measure for all benefits is highly disingenuous as housing
allowance [or whatever housing benefit is called nowadays] is much more
generous. People who think that’s not enough to live on are literal racists
who think white British people are entitled to more than non-whites need to
live.

And don’t let them make some comment about how prices are lower in
developing countries, because that’s already been accounted for.

I know a total cow called Vicky(Her real name) she receives from my
family member £200 maintenance per week as 15% of his net income.

Labour made a change that Maintenance now is not deducted from State
Benefits. This has encouraged girls to seek multiple fathers for the
children at 15% of their net salary after tax per child a nice little
earner.

Forgot to mention she lives rent free in a 4 bedroom council house.

We should remove all their benefits and let them set up a “just giving”
page, so that people can donate freely to these bastards by Paypal.

I give freely of my taxed income to Somalian aid, but greatly resent the
tax money stolen from me by the state being used to support the feckless
scrotes.

Perhaps sending all these poor deprived looters to Somalia to help with
humanitarian aid and at the same time they live as the Somalis do then perhaps
they will understand what poor and deprived means. And they can take the
lefties who write this garbage with them.

And they can take as many of those that they like!

we’re more generous than just JSA, we also cough massive amounts in housing
and other benefits.

how about we start a campaign to get Fat Jacqui to donate some of her
ill-gotten gains to a few local arsonists and rioters.

No; summary of Anna Raccoon’s comments: Actions have consequences.

Quite so, add to that, that the acceptance of the notion of personal
responsibility for one’s actions is at the bedrock of any healthy
society.

With today’s talk about reforming the education system here’s a
thought : teach the 4 Rs including Responsibility (yours and yours
alone), to start growing a generation that doesn’t need an
all-singing-all-dancing unaffordable big state.

So if a rioter is convicted of arson (the result of which action
someone’s home or business is totally destroyed), the correct course of
action is to effectively reward them by continueing to give them significant
quantities of taxpayers’ cash?

What strange, warped planet do you inhabit?

Wrongdoing of that sort should be punished, not rewarded.