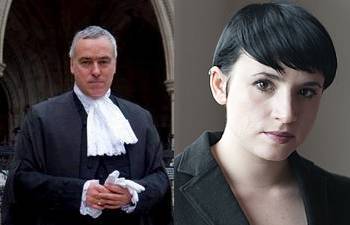 This is a short segment where Laurie Penny debated with John Cooper QC on Radio 5 about whether the sentences imposed on Charlie Jonnie Marbles and Gilmour was excessive, and â if so â why.

In the blogosphere, this has led to a targetting of the Judge concerned:


Iâd say that this video is somewhat âcreativelyâ edited.

Though Iâm something of a Laurie-Penny-o-Sceptic, but I think that the conversation about where this is political policing, reasonable policing, bad law leading to heavy handed enforcement which is not the fault of the police force or the Judiciary, over-enthusiastic political interpreation, or something else entirely, is an important one.

Laurie has agreed to appear on the Without Prejudice podcast for a debate with the legal hosts.

It will be interesting, and I will point it out the podcast when it is released.

I donât know if the sentence was too harsh, but I canât help feeling that
being who he was didnât help.

I doubt whether the scrote will serve the full sentence as room will have
to be made soon for all the other scrotes currently trying to go shopping at
Currys and Footlocker without credit cards or cash.

And if they gave him a longer sentence for being posh, well thatâs fine by
me; people with privilege should set an example, not behave like the
underclass.

Iâm sure the little scrote can be kept going with a weekly hamper from
Fortnumâs.

Gilmour was an idiot on the day, but Iâd have to admit to agreeing with
Penny on something for the first time in my life. 16 months is pretty harsh
and has the feel of a political decision more than anything. Canât see him
being a risk to society and havenât we got a âno sending people to prison to
save moneyâ policy these days?

Looks like much more dangerous people have either been let out or escaped
jail altogether.

Iâm a huge PF fan . Have the tattoos to prove it. But I have to totally
agree with Sokdraw. I doubt heâs ever had a political conviction in his life.
Well heâs got a conviction for something now!

The evidence before the court is
Incontrivertable, thereâs no need
for
The jury to retire.
In all my years of judging
I have never heard
before
Of someone more deserving
Of the full penaltie of law.
The way
you made them suffer,
Your exquisite wife and mother,
Fills me with the
urge to defecate!

The Trial, The Wall, Pink Floyd

Gilmour JR is a scumbag and deserves everything thatâs coming to him.
Subversion of the law is allowed through his old manâs music, period.

My general take is that the âpolitical policingâ arguments are DNA showing
through the Anti-Cuts movement marketing-front from some of the more extreme
left groups which provide the core impetus, and that debating it openly can
only be a good thing.

There is a case to be made, I think, for some stuff which has been badly
handled â but it has more to do with bad law than malicious practice from the
Judiciary.

I find myself on the other side of this argument than previously, for
example I found policing of the demonstrations at Kingsnorth far too heavy
handed â even though I disagree with the aims of the demonstrators there.

Gilmour got 16 months for âviolent disorderâ â Iâd say that that was
reasonable.

However, it is only reasonable if anyone convicted of âriotingâ in
Tottenham gets a lot more â the maximum sentence is 10yrs.

As far as Iâm concerned anyone who climbs onto the Cenotaph and tries to
pull the flags off deserves more than a paltry 18 months sentence.
Disrespecting our honoured dead to me deserves something in the region of 5 to
10 years, same for those who burn poppies on Armistice day

Oddly, there might be a couple of moments there when Laurie Penny is in
danger of saying something sensible. However, such is the nature of her
breathless squeaky delivery that it is always going to sound like the
senseless uber-lefty drivel one usually gets.

Gilmour should be locked up for the pathetic excuse that he was on valium,
whisky and LSD (!) at the time. Judges can smell bullshit like that.
They
must have changed the formula for LSD considerably if you can now swing on
flags and at all comport yourself in the middle of a riot on it. Just going to
post a letter on it would have been a journey too far in my day.
A genuine
expression of remorse might have gone a lot further.