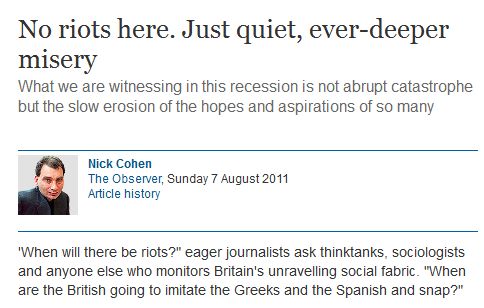 Itâs always a joy to turn to the quality Sunday papers for informed well researched journalism and up to the minute informationâ¦.or you could read the Blogosphere.

An all time classic.

Fundamental misunderstanding of the British psyche. The British donât do
riots. When Middle England (and Middle Scotland, and Middle Wales â Northern
Ireland is something of a special case) is seriously peeved about something,
it might organise a petition, or in extremis an orderly march (cf Countryside
Alliance), but usually it mutters darkly under itâs breath, makes a mental
note for the next General Election, and Carries On Regardless. As for the
likes of Toynbee and Cohen, they tend to be politely ignored in the manner
that showing-off children are usually dealt with.

There will be no White Riots, but our opinions will nonetheless be
expressed, by many means. Comments on blogs, for example.

Do they type-set the Observer on a Thursday and then all go home for a long
weekend?

But were these Greek and Spanish-type riots about entitlements and the
welfare state?

I only ask because I want to know.

All the indications point that way, thatâs for sureâ¦

I eagerly await the mobs burning down the Guardian and BBC offices and
rampaging through Primrose Hill and Islington. Perhaps the more organized
groups could collaborate with French and Italian groups to target lefty
journalist second homes in Tuscany and Provence where the âbestâ sort of
reporter is likely to be in August.

Oh the outrage! Bring the rioting to the doorsteps of the Cohens and
Toynbees, they need to see the peoples anger.

Chance would be a fine thing!

Yeah, right. The Cohens and Toynbees of this world will be cowering in
their Tuscan villas, claiming to be on the side of the âoppressed riotersâ
or blaming the cops for everything faster than you could spit.

A man can dream, the thought of the Cohens or Toynbees cowering from
mobs has a French revolution air that appeals to me.

These champagne socialists are always up for a riot on somebody elses
doorstep, the yoof need to get with the program if they want maximum
meejah coverage. Then again maybe they just want a free TV and are not
really revolutionary, that thought would send Polly into a depression.

Denial â¦ it really ainât just a river in Egypt.

Editorial FAIL! of the most hilarious kind!