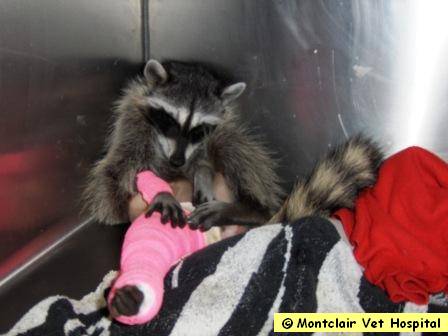 Weâve heard from the Boss again.

Anna has been back in hospital for a couple of days for a follow-up, and should be back home early next week.

Annaâs tumour taken out a couple of weeks ago has been analysed in Paris, and they are as sure as they can be that they extracted all of it. The tumour was a secondary, which had developed around a primary tumour.

The primary is thought to be a little bit of tissue left behind from an old (very old) operation.

If anyone has Annaâs mobile, calls will be welcome this weekend.

[Update: Sunday 9am – they’ve sent her home again. So good news, and we may hear more later or tomorrow].

Iâm so glad to hear the update. I hope you have a quick and a complete
recovery â and soon get back to regular racoontage!

I just wanted to send my love and best wishes to a woman Iâve never met nd
do not know. But the bastard thing that has been removed from you has also
attacked many of my family. So Iâm agin it! And for you!

Agreed â besides, Mr G deserves a break, heâs been on high adrenaline
alert for four weeks now. Theyâve given him a loyalty card for the local A
& E. I shall have to be nice to him for a day or so to make it up to
him.

Gloriaâs comment kept me wondering, Anna. Were you too distracted by
yet another massage by skillful handsome men and thus not inspired to
engage in conversation â¦?

Thanks for the update. All the best to Anna and Mr G.

Pink was a manâs colour until sometime in the middle of the C20. I used to
think it was some confusion on my grannyâs part when she insisted that When
She Were Young, baby boys were dressed in pink and girls in blue, but I keep
finding more evidence that this was in fact the case.

So, er, there you go. Useless fact.

Youâve been watching QI, havenât you?

Pink for boys -itâs true (as surely the saintly Fry wouldnât make it
up)!

Anna, Iâm glad the news is positive & hope you are back in charge
soon, to keep the mice in order.

Anna, best wishes from everyone at Newgate Tavern; you left the Raccoon
Arms in excellent hands but weâre looking forward to having you back behind
the bar.

Best wishes from the Geeky one

So they got the primary and the secondary tumours? Those Frenchies
seem to know their surgery. Good for Anna.

A big âget well soonâ from here in BC.

All the best, Anna. Thinking of you.

Hardly battle hardened. Thatâs the French for you.

The NHS would have given you a grubby shirt tail ripped from the nearest
drunken reveller in A&E.

Glad to see you on the mend.

Saul â The pinkâs OK, itâs the fur-matted zebra print towel thatâs in
dubious taste! I should know, Iâve got one!

(Iâve just spoken to Mme R. I thought she sounded rather distracted. Our
phonecall was a short one. Iâve subsequently had a call from Mr G and some
light has been shed on why she wasnât able to give our conversation her full
attention. I have been laughing my head off.
It is not my place to say
more. )

Isnât the Pink a girl thing?

I wear pink every day.

I just wish it wasnât always my eyeballs.

Thanks for the update Matt. It is nice to hear that the landlady is doing
so well and I hope to see her fit, healthy and back behind the bar soon.

Seconded! Glad to hear it all looks so promising

Raccoons have a reputation for being hardy creatures.