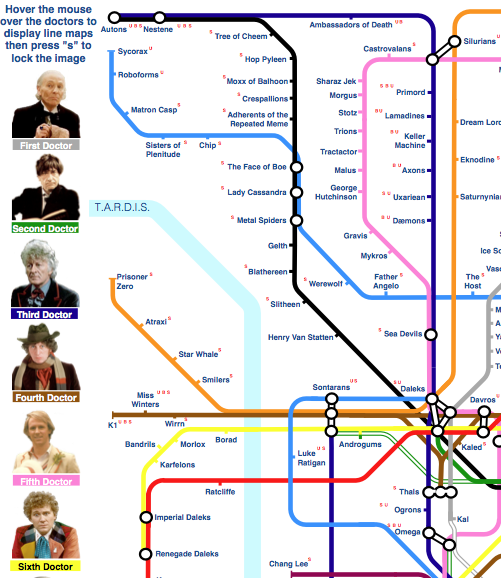 What happens if you decide that you can replace London tubelines with different incarnations of Dr Who, and 270 station names with Dr Who’s enemies?

Crispian Jago, who designed the map, has more, including a shop where you can buy posters.

Best of all, there’s an interactive version, with pop-up pictures:

I’d better stop, or someone will think I’m a nerd.

It’s been a while since I used the tube in London, but this map doesn’t
resemble any map of it I’ve ever seen. Has it been recently revised or
something? Or is the bloke who created this rather novel piece of cartography
‘avin’ a larf?

I think he’s appropriating the style.

There’s more explanation on his site, as linked.

*without* looking it up:

1 – 2 real tube stations with all 5 vowels in the name.
2 – What is
“Passing Brompton Road”
3 – Which is your favourite Tube Youtube clip?

Clues below if you don’t know the answers. Move your mouse around just
below here to highlight the links.

I could spend hours having fun on this. However, it’s not all ‘enemies’, I
don’t class the star whale as an enemy, for example.

Yes, the Star Whale was a victim. Can I see the Yeti in there? I was
about 4 when they invaded, and it is perfectly true that I had to hide
behind the sofa because I was scared. And Do I accurately remember that it
was the (possibly ironically) named “the Wirral” who produced the Green
Death? I can’t seem to find anything about it on line, but it was one of the
best episodes

Please nerd away! Thanks for sharing, this is fantastic!