Yesterday Law Blogger CharonQC, who will be known to many Anna Raccoon readers, did a short (20 minute) podcast interview with Tom Harris MP.

Tom Harris has appeared before Select Committees as a Minister, is now an Opposition Backbench MP, and has been both a working journalist and a press officer before entering Parliament.

It is a superb backgrounder to the hearings where Rupert Murdoch and Rebekah Brooks will attend the Commons Culture, Media and Sport Select Committee this afternoon.

They cover a number of areas, including:

What is the nature of a Select Committee?
Does a Select Committee have the power to compel an answer?
Why didn’t Labour deal with the HackGate affair?
Gus O’Donnell’s advice to Gordon Brown not to hold an enquiry earlier.
The implications for David Cameron.
John Yates’ resignation.
Where will this end up?
What are the potential political outcomes?
Do we actually need to create new press regulatory machinery, or should this be treated as within the scope of Criminal Law?

Charon QC has been blogging for many years, and publishes podcasts (RSS feed) about UK Legal Affairs, and sometimes how they impinge on politics, regularly. He also does a regular legal commentary podcast Without Prejudice (explained), hosted with David Allen Green and Carl Gardner.

The post image is also a Charon QC production. Murdoch as a potentially dead shark put on public exhibition has a certain resonance. 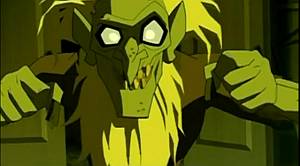 My view is that it will be the image of Rupert Murdoch, the dark power broker behind the scenes, potentially humiliated by a couple of hours of sharp questioning, which risks damaging his potency as much as the possible legal threat.

He could turn into a Scooby-Doo villain. Or, of course, he might not.

I think that Mr Murdoch will be more persistent than Danny Darrow, but I do think that the end of Fear of Murdoch will be important, which is one reason why his best strategy may be to use the assembled phalanx of Enquiries and Police Investigations as an excuse for saying no more than did the Maxwells.

And that would be a carefully worded legal statement, followed by a straighter bat than Geoffrey Boycott when he’s nearly reached his Century.

We haven’t tried running audio segments on annaraccoon.com often (if at all) in the past, so comments would be welcome.

murdoch has many allies .elections are coming soon in the USA.

I’m listening on Radio 5. As I think is everybody else, on various
channels.

All we can do is chew on popcorn and watch the show at 1400 ?, our few
votes sure ain’t gonna change things much.
LW’s predictions, and I don’t
have a good track record with the Nostradamus stuff, are-

1. ‘Witness questioned by lawyer answers’ – “Yes”, “No”, “I don’t recall”
and sweet-FA else said. He might vary it with “That’s subject to an ongoing
police investigation”.
or
2. He fights back hard. Boxes of files,
statements and photos proving that Labour, the Guardian and the BBC all
behaved like Caligula 1997-2010, stabbings, sister-screwings
and satanism,
all on live tv.

Throw a few coins in the wishing well for 2 to happen.

He would have got away with it too, it it hadn’t been for you pesky
kids…