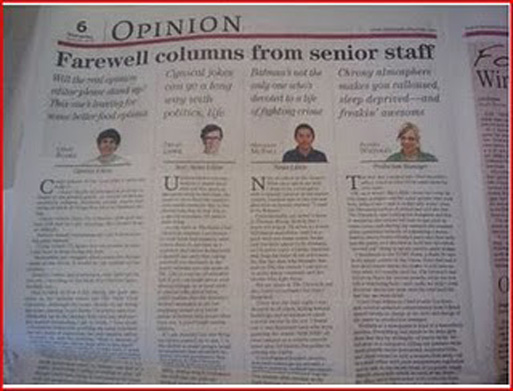 Tomorrow will be the last edition of the News of the World. It will become a collector’s item, trawled over for years by the conspiracy theorists looking for hidden messages, truths revealed,  if you just take the capital letters of the first sentence of alternate pages……

I thought it might be time to dig out this picture from the Utah Chronicle that I first published last year, illustrating the revenge of the sub-editors when management make popular journalists redundant……

I am sure the subs on the News of the World will rise to the challenge and produce some superb examples tomorrow.

Seems like the hacks managed to sneak some last minute messages into the
final issue by putting them into the crossword clues rather than in any
article.

So, farewell then my old friend News of the Screws. I can safely say that
my years as fine wine correspondent must have been some of the best of my
life. I think they must have been anyway, since I was so consistently smashed
I can remember nothing at all about them!

Eng joke warning. They’ve been countersunk.
Economics 101. There was a
huge market for it’s stuff so something will take it’s place.
As many
others have said the danger is if politicians bring in French-style privacy
laws
as payback for the publication of their fiddled expenses.

Word on the Street (of Shame) If the entire paper is cut up and reduced
into its individual letters it can then be re-assembled in the form of the
Book of Revelations. Thus confirming what we have all known for a long long
time, namely that Ed Miliband is the spawn of Beelzebub and a hyena.
On a
lighter note, tweet of the day from Old Holborn: Rupert Murdoch’s Death Star
is now withing range of Wapping (or similar). I shall miss the News of the
Screws.

The majority of the NOW subbies will be a little bit more restrained. At
least those hoping to be re-branded.

That’s pretty much how James May got fired from a well known car mag. Only
I think the hidden message preceded the sacking, not the other way round.