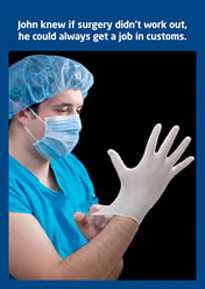 If you have to have a heart attack, if you must, what better place to find yourself than in a roomful of cardiac surgeons? Not in Rochdale, no Siree.

Not their job you see. They pressed the panic buzzer for the cardiac resuscitation team, the ‘crash team’ of Emergency Ward 10 fame. Nothing happened.

They hit the panic button again, still nothing. No one had told them that the ‘crash team’ had moved to another hospital.

They called security and demanded to know why the crash team had not so far burst through the door, paddles at the ready, to revive their patient.

Security told them to phone 999 and call for an ambulance…er, this particular group of cardiac surgeons were standing in their operating room in the heart of the hospital surrounding their unconscious patient with the be-still-my-not-beating heart. You might have expected them to do something themselves at this point…

Finally security gave them the special number for the ‘enhanced care team’ based somewhere in the bowels of the hospital who were trained in rudimentary techniques like thumping the patient on the chest…..

At this point they apparently remembered that they were all Doctors and cardiac specialists as well and grudgingly revived the patient themselves. Phew!

The surgery team was apparently unaware that they were supposed to summon [the enhanced care team] by phoning a special internal number.

A memo has now been issued to staff reminding them of the changes.

That’s a relief; in the meantime, avoid Rochdale Infirmary like the plague if you think you might need a Doctor as opposed to an ‘urgent care centre’ which apparently Rochdale Infirmary has been downgraded to – but still carrying out heart operations.

There has been no comment from the poor blighter who had the misfortune to suffer a heart attack on the operating table.

Oh dear that is not Ron at all, that is ex PC Derek G Haslam. I would not
let him babysit if you know what I mean, cough, cough.

Morning all, the happy wanderer returns, with serious academic
discourse.

They’ll be on strike for obscene pay
Avoid them all, or rue the day

‘puss’ ? I blame the keyboard.

You’re probably OK in the hands of Rochdale’s NHS Trust if you speak either
Urdu, Punjabi or Arabic since these are the main languages spoken by most of
the staff….

Having been to Rochdale for a minor emergency and a few other times for
other less serious issues I can say that I wasn’t impressed by the
hospital.

To make the matter even worse, it’s no longer an A&E center, just an
Urgent Care Center along with a number of other hospitals in the area. So
proper A&E centres are further away and fewer in number.

You would be well advised to avoid DrGum if he believes that the heart is
stopped during an angioplasty.

You might also want to avoid any NHS hospital while they attempt minor
staffing cuts. The idiocy of a surgical team requiring a “crash cart” team in
this day-and-age when pretty much every gym and swimming pool- (at least in
North America) is equipped with a defibrillator which can be used in an
emergency by the public, is laughable.

Of course even a defibrillator is unnecessary, CPR training must surely be
basic training for any hospital medical (and many non-medical) staff.

“You couldn’t make it up”
Just when you think that that is the truth,
along comes a Doctor (I assume he’s a Doctor) and proves that although maybe
you can’t make it up, the tuth is even more bizarre.
Happy birthday
America.

and there was me thinking you had to be a qualified doctor first before
becoming a surgeon!

This has to be satire surely?

Cardiac SURGEONS you say? Well first surgeons aren’t doctors, and second
they operate when the heart is stopped. Getting the heart beating again isn’t
something they’re awfully familiar with. Now, if it had been cardiologists
then it would have been inexcusable.

Haven’t heard about this elsewhere so what really happened is probably
totally different.

Added a couple of source links, which we missed. Thanks for the
feedback.

I don’t know what you’ve done but now the site crashes the browser on
my Android tablet.

Switch to an iPad then!

And another link for the doubters…..