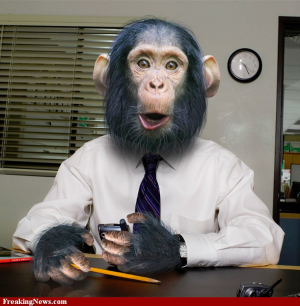 It is a well known mathematical and philosophical conundrum. If the universe is infinite, then somewhere, according to the laws of probability, there must be an infinite number of monkeys sitting on front of type writers. And one of them will just have banged out Hamlet, purely randomly.

Obviously Infinite Monkey Theory has been much on the mind of South Tyneside Council of late.

For a little while a blogger and tweeter (are they the same person – who can tell) going by the pseudonym of “Mr Monkey” has been “monkeying about” with the reputation of certain councillors and worse, one or two Council officials. Ooooh!

The cheeky Monkey has been saying that certain councillors and officials have been doing things that they really should not have been doing. What these might be I cannot, of course, say. But the council has been so upset at the antics of Mr Monkey, and SO concerned for mental health and well being of its officials, that it has gone to court in California to force Twitter to hand over the details of the eponymous Mr Monkey.

The Council suspect that the author of the blog is independent councillor Ahmed Khan. Some say it is Ryan Giggs. Others, that it is amazing manifestation of Infinite Monkey Theory. I myself know not.

I have just heard a councillor on the radio describing Mr Monkey’s blog a “filthy”, “perverted” and a “product of a sick individual.” Which is very odd, because from what I have seen, it made no allegations of a sexual nature at all. It merely commented on the ins and outs of Town Hall politics. And it appears to have shut down in 2009 anyway.

In the course of the little escapade it is clear that the Council has racked up a healthy legal bill. Estimates vary from £50,000 to £75,000 so far. That’s so far, by the way.

It appears that the councillors have been willing to spend a great deal of public money, and of their employees’ time, hunting down Mr Monkey. Next time may I recommend a tracker from the Matis tribe of Brazil?

Hells of a shot with a blow pipe those fellers, and they’ll track monkeys all week for a dollar and a couple of beers. A lot cheaper than my learned friends (especially Californian attorneys), and they’ll even eat the monkey for you, which would certainly tie up a few loose ends from the Council’s point of view.

Of course, the inevitable result of this exercise is that Mr Monkey and his blog is spreading all over the web and twitter like a rash in true “I’m Spartacus” style. Well done South Tyneside Council! What value for money! What a wonderful use of resources in a cash strapped area where people struggle for work and facilities! What a victory! How to turn a minor blog into a worldwide sensation.  You have just spent £75,000 giving free advertising space to copy written by a monkey. All together now:

Oooobi do! I wanna be like you oooh oooh!

On the subject of infinite monkeys, the best put-down I ever heard went
along the lines of:

“It is said that an infinite number of monkeys will, if allowed infinite
time in which to do so, eventually produce the complete works of Shakespeare.
As for this note of yours, I’d estimate ten monkeys, half an hour.”

The people in power still don’t get the internet.

They should ring BT, they’ve some good offers on at the moment.

You know what I meant. Cheeky.

If you’re not already follow @thefatcouncillor on Twitter. Like present
company he’s a blogger, a blogger who was trying to hold Ahmed Khan to account
by way of his blog (which has been taken down due to “other” legal problems in
the area). It’s a shame it’s down at the moment as a quick read through it
will confirm why Ahmed Khan is in the pooh-pooh he’s in.

But yes a blatant waste of council resources. A bit like my local lot
spending £900 on Thorpe Park tickets with taxpayer money: http://youve-been-cromwelled.org/?p=2537 (Profanity
warning)

Thanks for the “heads up”!

Nobody would be remotely surprised if some councillors were up to naughty
tricks. However, the difference between scurrilous accusation and
investigatable wrongdoing is evidence. If Mr Monkey has some, he may be onto
something. If, however, his scribblings are unsupported (even if they are
true) he has a problem.

actually it seems mr monkey has returned. I hadn’t heard of him until
reading an article in “i” today… but seems he’s back with a vengeance.

Having read a few of the posts, I can see why a few councillors are getting
a little wound up over it!

Thanks for the link. Some further thoughts overnight, prompted by Randy
hack (above). Mr Monkey may well be scurrilous. He may well be making
allegations against Councillors that are in fact untrue. OK. In which case
the Councillors have the right to pursue said Monkey and sue him with their
own money. I am not sure that Mr Monkey has defamed “the Council”; nor does
it appear to me that it is possible to defame a body like that. Which means
that this should be a matter where the Councillors who complain foot the
bill. The argument appears to be that the Monkey might upset a council
official and they have a duty of care to take action to protect the
employee(s).
Yeah….

Agreed. This is not what South Tynesiders pay council tax for. Is
it?

You are Gildas the Monkey and I claim my five pounds!

One has to hope that Mr Monkeyis using zyztems torbrowser (or similar) for
anonymous surfing.

But it does show that defamation is not a game to play lightly.

I thought it was only in Hartlepool that monkeys were persecuted bu the
city officials.

Quite an amazing and crazy expensive diversion.

After all, it is just cyber curtain twitching.

It did occur to me. The concerned council couldn’t be using “concern” for
its employees to justify using public money to silence what is essentially a
private law matter could they? That would be wrong, wouldnt it?
So I am
sure that’s not happening
Phew

Apologies for the light blogging by the way. Anna is offline moving house
and at the mercy of the French telecoms engineers. I have a full time job with
deadlines to distract me. Thanks go to our guest authors for submitting some
cracking articles. More guest authors are welcome so if you have any thoughts
write them down and we will do our best to publish them. See the about
us/contact page for details.