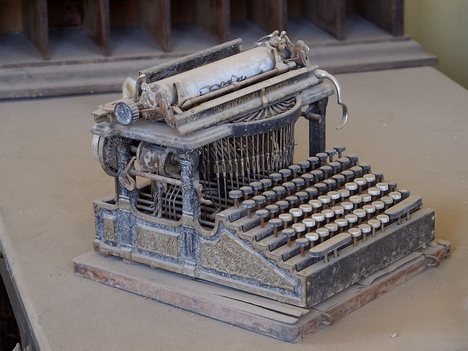 Jumps Over the Lazy Dog” – the pangram that we all knew by heart once upon a time. Those of us engaged in the process of mechanically transcribing the spoken word, that is. It was drummed into us as we sat in front of ageing – even then – Remington typewriters whose keyboards were hidden from us by a rough wooden board.

Fingers punching up and down, we learnt the placement of the 26 letters represented in that phrase by heart.

To this day I cannot type fast on a laptop keyboard. A laptop demands a lighter touch, fingers held away from nearby keys, no space for a manicured nail to drop down between the letters. It is an entirely different technique.

Give me an old fashioned keyboard, and my fingers fly, in light or darkness, it makes no difference to me – for I never look at the keys. While researching this post I found a ‘typing test’ – try it – I still hit 59 word-units a minute. Now try doing that by looking at your keyboard. You waste too much time looking from text to keyboard and back again. It can’t be done.

Amazing isn’t it, that in an age when speed and efficiency are everything, we have abandoned such a simple technique to speed? Not only abandoned the technique, but the means by which we once achieved it.  Godrej and Boyce closed the doors of their factory today. You’ve possibly never heard of them. They were the world’s last manufacturer of the old fashioned eco-friendly, upright typewriter. The machine with the perfect carbon-ribbon footprint. No electricity required.

In recent years their output has been confined to the Indian government – departments that demanded a typing test on an old fashioned ‘upright’ before they would let you near their computers.

After the last war, there was a critical shortage of typewriters in Britain; I found the history of one enterprising fellow who specialised in recycling war damaged typewriters and reconditioning them for sale to all the major newspapers.

Journalists everywhere bashed out their copy on a Remington ‘Noiseless’ or an Underwood. I can’t see that great literature is ever going to be produced by using your thumb to tap the ‘P’ key three times until it reluctantly disgorges an ‘r’ onto the page – and the phone guesses that you were trying to say ‘perv’……..

You may enter twz d bst of x, twz d wst of x with the speed of light with your thumb, but will it entrance future generations with the resonance of Charles Dickens ‘It was the best of times, it was the worst of times’?

Now the world can only ponderously pick out letters with a stylus or abandon themselves to the predictive text software of the mobile phone. The new Blackberry Curve Touch doesn’t even give them the option.

Does this mean that Tippex has/will go down the drain now?

You’re probably not allowed to pour it down the drain, there’s bound to
be a regulation somewhere about it.

I myself use a Microsoft Natural Ergonomic Keyboard. It’s the one where the
keybaord is split into two vertically down the middle. It allows you to keep
your arms and hands in line rather than with your wrists twisted straight to
cope with the keyboard. I’ve got two (one for work, one for home) which I’ve
had for nearly ten years now and they are still going strong (though
discoloured a bit now).

Maybe we should compare notes on how long our keyboards last?

Is this in contrast with “… wrists firmly limp …” ?

Give me an old fashioned keyboard, and my fingers fly…

You might like to consider this, then:
http://www.usbtypewriter.com/
I’ve not tried one myself,
but it looks entertaining.

Pack my box with five dozen liquor jugs – 32 letters to your 35!

I typed out my MA dissertation on my Dad’s old Remington ‘Noiseless’ – a
candidate for a false trade description if ever there was one. It was
character-building. I had to leave gaps for all the Old English letters in the
text, and write them in with a mapping pen later. Happy days.

Funny – all that effort to type, with the fingers, hands and forearms all
contributing to the effort, and no mention of RSI.

I’m very primitive in word-processing skills, but I’m still impressed by
tricks like copy-and-paste, or rearranging paragraphs. I know there are lots
more such tricks, but these are enough for me.

Use a mechanical typewriter? Without correction facilities? No thank you!

But they were fabulous contraptions, I agree with you there.

I gave up on predictive text. One of the first tasks on the rare occasions
when I get a new phone is to disable it. It never predicts the words I want
anyway, and now I’ve got a phone with a QWERTY keyboard I can produce missives
fairly swiftly without being second-guessed.

I’m sure there’s still a typewriter in the loft here somewhere. However,
the cats would object most strongly if I swapped it for the printer because
it’s not nearly as comfortable for sleeping.

I’m not sure what your point is here. I’m typing this perfectly quickly on
a laptop keyboard. I never look at it, nor does anyone who uses one regularly
enough. Apart from, as you say, having less room for impractically lengthy
fingernails, I really don’t see how it’s any different to a typewriter, apart
from not making an infernal racket. (To be fair, I do prefer a larger
keyboard, but I long ago trained myself to be just as competent with a laptop
sized one, so as not to be handicapped when that’s all that’s available. I’m
sure you could do the same if you wanted)

For the fingernail problem, I suggest cutting them. Likewise, if you have
problems riding a modern bicycle in high-heeled shoes, I’d suggest ditching
them rather than lamenting the decline of the Penny Farthing.

As for the predictive text folks and their “txt msg 2 u tjdfj dkd” writing
style, that’s usually not the fault of their input device – I think you’ll
find they still write given a giant keyboard, a typewriter, or a pen.

I have a typewriter stashed away in my hall cupboard, saved from the scrap
heap when my grandfather’s things were being cleaned out. Only one key sticks,
and I love the smell. But I can only bash out one letter at a time

Believe it or not, I actually saw a geniune typewriter ribbon for sale in a
shop; A real one, red and black. I expect that not many under forty would
recognise it. I was never up to “raccoon speed”, only achieved 30 words per
minute.

I find that on these new fangled computer things, someone moves the keys
about, I type one letter, and a different one appears.

Oh for the days of clattering offices, typewriters at full speed, fingers
so fast that you could hardly see them, and never a typo all day. How did they
do it? For those not too familiar with such things, a typing pool was not
something for typists to jump into when it got too hot in the office.
Nostalgia time is upon me again, I must go and have a short lie down.

On Monday 28th February I posted “The Kings Speech”. A nine bob note for
anyone who can identify which typewriter factory it was.

There are several alternative keyboards available, with much faster typing
speeds possible than that which Querty layout allows. See Wikipaedia, chorded
keyboards.

The 5-key microwriter was briefly popular in the 80s. There’s also various
ergonomic shaped/curvy keyboards, such as the Maltrons.

5-key typing began in 1874 with the Baudet telegraph code and matching
keypad.

The legal world will rue the demise of the typewriter; thick, creamy laid
low-acid rag paper on which are imprinted indelible typewriter characters is
almost impossible to alter or forge. A deed or contract so produced, and
‘engrossed’ with hand-stitched and knotted colour-coded legal tape (green,
pink, red or black, depending) will not only last for centuries but offers a
security that laser-printed 100gsm pulp paper engrossed with a plastic zipper
never will; I predict these modern deeds will fall apart within 20 years or
so. And forgery and fraud will multiply.

I can type. But my keyboard can not spell.

I can’t type for toffee – as my constant spelling mistakes so clearly
demonstrate!