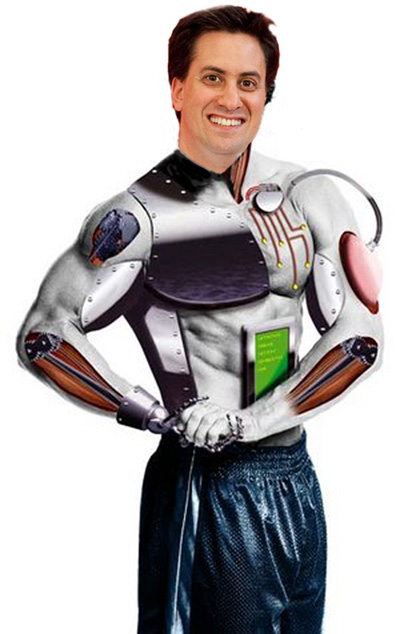 Word has reached me here at the Nun and Firkin that Ed Miliband is to undergo surgery. Not, thank goodness for some terrible life threatening condition. Oh no, no, no!

Many of you will remember the Six Million Dollar Man.

This was the TV series in which heroic astronaut was Steve Austin was rebuilt with bionic technology, and armed with super powers was able to fight crime and win by elections. Well, forget the last bit, obviously.

Anyway, it seems that Labour will stop at nothing to âmake overâ Glottal Ed and is determined to go the same way to create the ultimate political fusion of man and machine.  He has already had a wife-o-plasty (the technical medical term for joining together a dreary politician and his dreary girlfriend in a civil partnership when they have been shacked up together for years). Now heâs having his adenoids fixed.

It seems that nasal whine has played badly with the Focus Groups in Barnsley or Whitehaven (although one would have thought he would have sparked a major resurgence in Birmingham). So itâs time for a makeover.  Not content with a bit of colour coordinated power dressing and better haircut, Ed the Paranoid Adenoid is prepared to do to his nasal passages just what he did to his brotherâs back: sticking a knife in.

It may well be that the new Super Ed that emerges from the (private?) ward of beeping machines and green gowned surgeons will have had more than just a bit of super nose picking. In true Steve Austin style I predict that the near brain dead Hampstead-o-naut will be completely rebuilt with:

But perhaps it will all be a bit less Steve Austin and more Austin Powers. Yeah, baby.

It beggars belief how far politicians will go to fit the bill these days. It struck me that if itâs not just dressing right and speaking the party line and being on âmessageâ that are enough but surgical enhancement thatâs needed, where will this end? Perhaps iDave From Oxford could have a chin grown, or at least a tie. Nick Clegg could have a backbone inserted. John Prescott could finally have his arse removed from his mouth. And Ann Widdicombeâs political career could be revived after a bit of nip and tuck turns her into a swim suit model.

Finally, can I suggest that that Nasal Ned might usefully undergo one drastic procedure designed to Labourâs unquenchable appetite for high spending and high taxes?

O/T, but referring to an earlier post by Anna: sadly, Janet Richardson has
died.

The best one was ED-209, from Robocop. âDROP THE WEAPON. YOU HAVE 10
SECONDS TO COMPLYâ¦!â Iâd want to one of those let loose at Brussels & one
at Strasbourg (with itâs logic scrambled so it thought they were all armed).
For fairness
it could bellow it in several languages.

A Ball removal could be on the cards next.

Iâd heard he was getting a new nose, presumably because the old one was too
brown.

Frog in his throat? Thatâs Cameron, and itâs part of a Belgianâ¦

I need to lie down again.

Anna will vouch for my purity of thought and wordsâ¦

John Prescott is all arse. Remove that and itâs euthanasia.

On a serious note, one of the arguments against IDS, when there was talk of
a leadership bid against him ,was that he made a poor Parliamentarian because
when he spoke, he always had a frog in his throat.

In the age of tv, we get the celebrity politicians we deserve.

OK, having thought about that, Iâm off to lie down and cry.