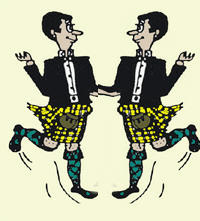 This Raccoon happens to have the rarest blood group there is – AB-. I share it with just 1% of the population of either France or England; you might expect the French to be clamouring for a drop of Raccoon juice coursing through their veins.

They are not – for the simple reason that I am English by birth, and not surprisingly have spent long periods living in England. The French simply do not want blood from anyone who so much as visited Britain between 1980 and 1996, far less resided here on a permanent basis.

They have had their own problems with infected blood – the Health Minister and two government officials were gaoled in the wake of the scandal of 4,000 people being given infected blood. They don’t wish to add to the problem by taking blood from a group they see as high risk resulting from the CjD/Mad cow disaster.

Am I screaming the odds that the French government is sending out a message that the English – even those who have never eaten beef – are simply not to be trusted?

Er no, but then I am not part of that precious high stepping, pouting, professional offence taking group known as the anti-homophobia political Gay Wardens.

They have come up against a similar ban in Britain – those gays who have engaged in a mutual exchange of body fluids in the past ten years with a gay partner are requested to be on their honour not to donate blood. Not tattooed with a sign on their forehead to ensure that they don’t, but just on their honour to tell the truth. Cue much lifting of skirts and faux hysteria.

This morning the Guardian is hosting a predictable howl of outrage from one of their number:

“What message does a government send out when one group cannot give blood even if they have only ever had safe sex?”

“This proposal won’t help the young woman with a rare blood type, knocked over by a car, bleeding profusely.”

Neither will being given a dose of Aids either – do you mind giving her an element of choice in the matter Sweetie Pie?

Speaking as someone with a rare blood group, I would just as soon take my chances on the availability of the correct plasma from a group that did not include intravenous drug injectors or high risk sexual activity, but of course this option should not be open to me according to Patrick Strudwick.

In the name of ringing the ‘bell for British gay equality’ out across the world, which appears to be far more important to him than my health, he wishes his blood to be mixed into the general package and distributed to me on the grounds that this is more preferable than ‘if a member of my family died because blood was not available to him from a member of the gay population’ – or rather one who wished to engage in a pedantic conversation as to whether his method of sex was safer than another method of gay sex.

Frankly my petal, I’m not really interested, any more than I am in whether one method of intravenous drug taking in a Glasgow hovel is better than another. I have absolutely no objection whatsoever to be given blood from a rabid, Guardian reading, shaven headed Lesbian with a tattoo of Che Guevara on her bum, (though I’d rather you didn’t tell me, it might delay my return to blogging whilst I rethink my philosophy) nor from a mincing queen with better ankles than I, and an extensive repertoire of dirty jokes – so long as she hasn’t engaged in practices ranging from intravenous drug-taking to intravenous gay-taking that have a high probability of introducing Aids into the cocktail of ailments that I might be suffering from after this hypothetical car crash.

Nice piece. I suggest the Gay Wardens stick it up their arse.

Those two scottish gentlemen in the picture are dancing the Gay Gordons.

Exchanging fluid with someone during sex or during a tranfusion is wreckless if you live a high risk life style.

Examples are: Gays, Prostitutes, Sub Sahara Africans, Junkies, people who travel extensively in 3rd world or other types of sexual deviantes. Grouped together I like to call them Guardian Journalists and BBC Employees. LOL

“Those two scottish gentlemen in the picture are dancing the Gay Gordons.”

I think the picture and the title are a play on words.

If anything it proves that gays are socialist in their outlook: if it isn’t for everybody then it shouldn’t be for anybody. We need to look at this in conjunction with the post “Labour – Make Poverty Permanent” of a few days ago.

Please let us remember that AIDS does not discriminate on sexual identity.

@ snaptophobic
Of course it doesn’t, which is why the NHS blood transfusion service will not accept blood from anyone who has had heterosexual sex with someone from sub-Saharan Africa (nor anyone who is or might be infected with tetanus and various other diseases).

Last time I gave blood they were also saying no to people who had used the services of close-contact female entrepreneurs. Although I doubt the Guardian will be casting about in the sheer horror of those who use this particular free-market activity being discriminated against.

National chauvinism. They make a ‘sang’ and dance about our prions, we put electric grids in the Chunnel to keep out their rabid foxes. Not sure how we keep out their Colorado Beetles these days, trained bats doing standing patrols at Dover?

One of my best friends in the States is about as Libertarian as they get. He’s also a mincing queen. He would angrily disagree with “if it isn’t for everybody, it isn’t for anybody” instead believing, “do whatever the hell you like so long as you don’t harm anyone else” and I’d hazard a guess he’s amongst the majority of the gay community. I’ll have to ask him what he thinks about this issue. Probably thinks it’s fair enough considering how well informed he is about and rightly scared of AIDS

Lol. This all reminds me of one of my favourite sketches of the last few years. It’s from the Sarah Silverman Program season 1 where she goes to get HIV tested because she’s bored

Sarah: I sure hope I don’t have AIDS. I know I don’t have AIDS, I just… I woke up feeling so poopy this morning and I just wanted good news, you know?
Nurse: Alright, I just need to go down a quick checklist. Have you ever had unprotected sex?
Sarah: Errrr, is there any other kind?
Nurse: How many times have you had unprotected sex?
Sarah: Errr… (writes it down)
Nurse: There’re… two numbers here.
Sarah: Oh, that’s for the front.
Nurse: But they’re the same number…
Sarah: I know, I’m kinda OCD like that.
Nurse: Did you ever have a blood transfusion in the 80s?
Sarah: Yeah.
Nurse: You did? You had a transfusion in the 80s?
Sarah: Oh! No! I thought you said in Haiti!
Nurse: How long were you in Haiti?
Sarah: Uhh… I dunno, it’s kinda hard to say, I was doing a lot of heroin at the time.

Being the recipient of some ten pints of the ‘real good stuff’ during a major abdominal operation some three years ago, I too was more than happy to hear that the ‘bent’ percentage was excluded from donating on the grounds that ‘well, you can’t be too careful’.

If the objectors wish further references, I would offer the following pages for study, and a period of reflection:-

I was told not to bother donating on the basis that I had previously had a hepititus test on account of a rather alarming liver count during a routine medical.

This was in spite of the test results being negative and not being required for “risky activity” as they so quaintly put it. So when I am being bombarded by adverts demanding I give blood NOW I’m not overly impressed, My suspicion is only people who have never had sex, been ill or indeed been conceived are considered pure enough to donote to the holy blood bank….

Gosh – same group as me. Can we do a mutual aid scheme?

My mother used to take some delight in referring to my AB- as “Royal Blood” (I assume Royal in the sense of ‘special’). Ironic, given that I was, as my wife’s prep school friends would have described me, “a dirty kid”.

It’s amazing how well some scrotes from the lower orders polished up after a grammar school did its stuff. Do you think it was something in the genes? Was my old mum right after all?

“Gosh – same group as me. Can we do a mutual aid scheme?”

Do I take it you wish to exchange bodily fluids with me?

I shall have to have a word with the management first…..

I can take and assimilate blood from any type, be it rhesus positive or negative.

We are the next step, resistance is futile.

AB Rh- can receive blood from AB Rh – , A Rh -, B Rh – and 0 Rh-. Have you considered <a href="http://ibgrl.blood.co.uk/isbt%20pages/isbt%20terminology%20pages/table%20of%20blood%20group%20systems.htm"<the other 29 blood group systems? That’s why hospitals do blood type tests even when you tell them your ABO type.

I have wondered about this topic before. Is there no way of screening out HIV or otherwise-infected blood before it goes into the sump? After all, there might be people who maliciously put their infect blood into the pot just as there are heterosexuals who carry HIV.

Part of the reason for the ban is (I don’t work at the blood transfusion service so I may have this wrong), that to save money, blood is mixed before it is safety tested. Therefore, one contaminated donation will result in the rejection of a number of uncontaminated donations.

Hence, as SBML states, the rejection of high risk factors.

I can’t give blood at the moment because 1) I’m still on malaria prophylaxis – and I think there’s a 6 or 12-month stop on you once you come off and 2) because I’m half-way through my Hep-C vaccination cycle.