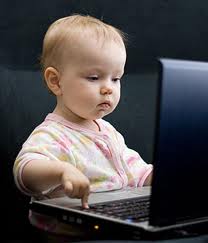 One of the mysteries of blogging is ‘who are you actually addressing’? Who are the people responsible for the ‘hits’ on your site?

The only way I can write is to address Gloria and Saul – they are real people, I feel comfortable talking to them. Everybody else is welcome to eavesdrop – and I’m delighted that you do.

I have had my suspicions as to the identities of some of the other characters who arrive here on a daily basis – I’m looking at you Randy Hack, directly at you – but it turns out my exotic fantasies are nowhere near as far fetched as the truth.

Did you know that 80% of ‘under fives’ are on line at least once a week? Yep, toddlers, surfing the net, using Skype, and chatting in the forums?

Did you realise that some of your readers aren’t out of nappies yet?
Mind boggling!

About 10% of them at a conservative estimate will not even be human.

The Googlebot is coming to get you.

When did you last look after a 3 year old? They are way past goo goo
gaga.
My 3 year old, Grandson

,
does whole sentences, Lego bridges, Meccano models, calls us on the phone . No
laptop yet. Keep him practical eh? He might need those skills in our uncertain
future…

@woodsy42
“and the lack of artificial and national boundaries they will
assume” a very, very good point! One world. One human race [goes back to
utopian dream].

Ah, but does he do the thing of pointing at Dad when the person on the
other end of the phone asks if Dad is around rather than answer yes? All my
neices have done that.

As sad as it is, that’s good one, Cascadian.

Given the current state of reporting of the Japanese “meltdown” and the
hints at armageddon, I can only assume that the five-year-old internet users
are mainly journalists and european politicians.

It’s OK Anna, I know exactly who I am, so no worries

Love the 5 year olds, what an instinct for technology they will gain, and
the lack of artificial and national boundaries they will assume.

The next generation won’t need to ‘Go Online’

They’ll all have micro-chip brain-implants fitted in the maternity ward, to
receive government propaganda injected directly into the mind.

@annaraccoon2010 Why don’t journos ask Cameron about the suspension of
Brian True-May? Don’t they care about free speech?

I do hope no one is questioning my identity!!

You never know. I might be real. I might not. I tree falls in a forest and
noone hears. Does it make a sound? What is reality? Where can I find a new
scythe?
Why are Simon Cowell’s trousers so strange?
Mysteries within
enigmas within conundrums…

Ha! Tsk! I assure you madam that I am as real as the next wit, raconteur
and bon viveur? What, am I to be accused of being computer generated? Raccoons
in Glass Houses should not throw stones! i flinch not before your Basilisk
stare!!

By the way my next best selling self help book. “The Dangerous Book for
Inebriates” is due out soon , with forward by Sister Eva Longoria.

Mozart was writing symphonies by the age of 5.
I very often go in to
character when online, usually as a Col Blimp type, probably because that type
was starting to be lampooned as satire started on TV. The other one is the
late shock-jock (as in DJ) Wolfman Jack who was as unruly as hell to the
authorities. I’ve noticed that some people never use an online persona and
others stick to just one.

So that’s who comments on the Guido Fawkes website – always wondered.

Funny, that thought occurred to me too.

That one that uses uppercase and always ends with ASTA.
You sometimes
see a few random words in the comments here, I used to think it was someone
testing their access but maybe it is a sprog bashing the keys.