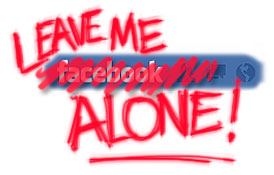 “Thanks for your feedback. Over time, this information helps us deliver more relevant adverts to you.”

I don’t want relevant ads. In fact I don’t want ads at all. You’ve managed to provide me with even less relevant ads each time, so why even bother to provide me with that platitude when I explain why I don’t want the stupid ads? If I dismiss an ad for a poxy mobile phone I don’t desire, why serve it up again? Who are you to tell me I need to lose weight? Do you really think I’m at all interested in credit cards, foreign holidays, satellite television, or a million-and-one other things? None of the ads you’ve ever served up have been relevant to me, ever.

I realise I’m just advertising fodder to make you even richer, but please just stop it. I have an adblocker installed in my browser. Sadly, you keep circumventing it, and it’s beginning to wear my patience thinner. Every time I refresh the page, I have to block the same ad again. It’s boring, but I refuse to kowtow and let you litter my home page and profile page with adverts for stuff I don’t want.

I know you’re not listening to me. If you were, you’d have deleted my account for me due to the expletives I’ve showered across the comments box each time I dismiss an ad. I only remained a member of your stupid social network because all my friends were there and I enjoyed the company. If it wasn’t for my loyalty to my friends, I’d never have joined in the first place.

In fact, stuff your social network! I’ve done with it. I know you won’t miss me, but I’m out of here. Good riddance to Facebook!

I was a member for about a year, then suddenly all the messages from
friends were accompanied by a grim warning that those members using the system
with insufficient frequency were basically deadweight and would in due course
have their accounts deleted. Apparently I was flagrantly robbing them of
bandwidth with my selfish attitude. Suitably chastened, I removed myself.

What I find so incomprehensible about Farcebook is not the advertising –
which I find incredibly easy to ignore – it’s the numerous accounts I’ve heard
of people (usually teenagers) who’ve complained of being bullied through this
wonderful social medium – sometimes with tragic consequences. If such a thing
happens, it causes me to wonder how particular they are about the Farcebook
contacts they make in the first place; I certainly wouldn’t entertain the idea
of exchanging wall information with people I don’t like or trust. So why don’t
they either:
a) ‘unfriend’ the so-called ‘friends’ who give them the grief;
or
b) tighten up their security and access settings; or
c) pull the
plug?
Or am I missing something here…?

My daughter recently made herself a bit of a target at school by not
signing up, to the point where someone created a fake account for her. I
think that much of the bullying that goes on is about what people are saying
about you, in their own little club, as well as to you.
There are
precedents. The Stanford Prison Experiment and (with apologies to Godwin)
The Third Wave experiment in Palo Alto.
Facebook’s business model seems
to have as its core the inner emptiness which seems increasingly prevalent.
You get a fake sense of belonging and enough silly games and Zuckerberg gets
his billion in advertising revenues.
What niggles most is that it’s a
totally closed and exclusive system. I had to create my own (fake) account
simply to get in touch to report the fake account my daughter had set up for
her.
Just a thought.

>Good riddance to Facebook!
Well done. Failbook is fail. Don’t give
Fuckerberg the ability to sell you out to the highest bidder.

I notice your ads. Will not read your blog again.

When I watch TV the advertising does not cost me a penny to view it.
However adverts on the web, slow my connection, steal my bandwidth and target
me with utter crap.

And of course the wonderfulness of the interwebs is all paid for by the
mining of fairy dust and/or loans secured on the gold safely lodged at the end
of the rainbow? Reading this – and the comments – just brings to mind the
public sector trade unions and left wing politicians who think that there’s a
money tree (probably in Sir Philip Green’s back garden) that can provide for
everything.

We saw it with the sniffy critiques of Murdoch’s decision to put The Times
behind a “paywall” (in other words to make you pay for all that expensive
journalism and stuff) – it is nonsense. And we see in the piffle spouted by
the folk at “Uk Uncut”, with their endless earch for new money trees (also
known as other people’s back pockets).

So there’s a few ads – hardly that much of an imposition really given that,
in return, we get access (FREE!!!!) to a massive social network should that be
our wish. It isn’t mine – I find Facebook just a wee bit creepy so don’t use
it – but it is the desire of approaching 750 million folk across the
world.

Ads are just communications – and mostly they don’t impose on us. So get
used.

Frankly, given the choice of paying for a service I want and putting up
with ads thrust in my face, I’d choose the former. The Times isn’t good
enough to justify a subscription, frankly, so I don’t. The BBC I already pay
for via my licence fee, so expect to view that without any adverts or
subscription fee.

As it is, Adblock does just fine. I see no ads at all. Just as I see no
ads on commercial television. Timeshifting is wonderful. So, no, I don’t
have to get used to them at all.

Given that people tend not to want ads and expect the interwebs to
provide a free service, those who provide the service need to think again
about how to bring in the money. Adverts are a 20th century solution to a
21st Century problem.

I don’t know about Facebook, but LinkedIn provides a subscription service
for premium content – job hunting and so on. I’ve no idea how successful
this is, but it is a better solution than shoving unwanted adverts for stuff
I don’t want and will never need in my face. Perhaps they need to experiment
about how much of their service is paid for and how much is for free.

I accept advertising as a necessary evil for free access to some sites.
In fact, I put up with the ads on Facebook for most of a year. What annoyed
me was the fact that I dismissed an ad, gave a sound reason for dismissing
it, only for it to instantly reappear, five or more times in a row. Being
told that my feedback was important only made it worse, because it was
patently a lie.

Mind you, ads that are served based on page content can provide some
hearty chuckles at the utter inappropriateness and unintentional humour!

There is a real beleif on the internets that everything should be “free”,
from the same people who invariably are anti-advert. Indeed, it is the magic
money tree syndrome.

I stopped using facebook a couple of years ago, because I found the whole
thing far too intrusive. They seem to want to know everything about you, and I
have little doubt that information ultimately ends up with marketing
companies.

If enough people refuse to fill in the census then they could get together
in a class action for harasment and identity theft against UK and US
government.

You wait until the Yank co gets it’s hands on our census data, you’ll have
individually targeted ads on the telly.
“Hullo, Mr X, how’s the piles
today? We have a special offer on anus cream”
“And the friday night sex?
Buy our Guide To Marital Bliss & get a free royal wedding mug”

“In fact, stuff your social network! I’ve done with it. I know you won’t
miss me, but I’m out of here. Good riddance to Facebook!”

Excellent. That’s one more of us and one less of them. I only got a
Facebook a/c (with almost entirely false information, natch) to leave abuse
for the 1010uk.org child exploders and haven’t used it since.

Unfortunately, Facebook think that the products I am most in need of are
‘Raccoon extermination’ methods…..
Hence I find going anywhere near
Facebook a chilling experience.

Pardon me for asking, but how many Roccoon extermination methods are
there?

Let me count the ways – none of them have worked so far!

Best move you ever made. I even binned my LinkedIn account.

Like Central and Regional Govt, it is just another beast that needs
feeding. Don’t feed the beast

Funnily enough, a business colleague and friend I trust reckons I ought
to be signed up to LinkedIn, in order to try and drum up new business for my
dead-in-the-water career.

I remain to be convinced, so I’m staying out for now. I celebrate my
Facebook suicide’s first week on Friday. Seven more days and my account
will, hopefully, be deleted.

I was persuaded against my instincts to use LinkedIn to help me get
work. So far my scepticism has been justified. It’s not served any useful
purpose.

As for Facebook, I’ve never been inclined to try it. I use Adblock Plus
to block ads. I presume it will work with Facebook.

Adblock does work for FB, but they keep changing the way the ads are
served up. It’s an ongoing, and ultimately frustratingly pointless,
battle. I’m glad I’m out of it now.

You also need noscript. with the two of them running it has to be a
very, very persistent ad that gets through and then only when you have
to open the door because of bad coding on a site.