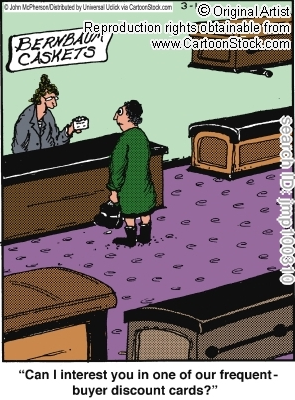 Liverpool Councilâs Spring Sale of cremations is about to end â from the 1st April the price will increase by Â£156 â those council tenants who thought all their Christmasâs had come at once when they were relocated from Scotland Road to leafy Kirby, which unfortunately doesnât have its own crematorium, will suffer a double penalty, their bill as non-city residents will double to Â£1,298.

A spokesman for Liverpool Council said (with a dead straight face):

âThe unprecedented cuts in funding made setting the councilâs budget extremely challenging and there was a determination to protect frontline services where possible.

Donât all rush at once now! Form an orderly queue.

I couldnât find a match for the incendiary puns above, but may I offer this
from a Birmingham City Council press release last year?

â The council has also identified several areas where it can increase
its revenue. These include looking at what can be done to increase revenues at
its cemeteries and crematoriaâ¦â

If itâs Sandwell thereâs no guarantee that the human fuel will have
expired before they incinerate it.

Maybe Liverpoolâs cremation costs could be reduced if they followed
Redditchâs example:-

Not possible. There are already three streets of terraced houses
unofficially tapped into the waste heat from the crem. Theyâd reheat their
take-aways there as well if they could find a shovel with a long enough
handle.

Theyâd better not cremate me. The whole place will go up like a Molotov
Cocktail!

Just a thought for an appropriate songâ¦

The Doors would be indispensible, with âCâmon baby light my fireâ.

Followed by The Crazy World of Arthur Brown â âFireâ

Pah! These councils have money to burn. Let the pyre bewareâ¦