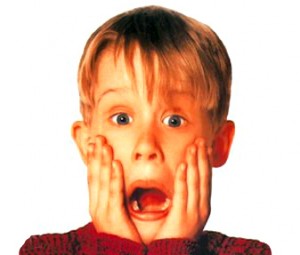 So its now a crime to leave a child unattended for 30 minutes. It seems that is the case now that some police authority has cautioned a women for leaving her children alone for 30 minutes whilst she popped to the local shops.

I donât know how or by whom the woman was âshoppedâ to the police, there is probably more in the story that hasnât been published about this aspect yet. As to whether it makes a difference to the issue, probably not.

I can see why she was cautioned. Itâs because the police found a nice simple way to up their figures closer to whatever target they have for cautions. This being easy to enforce because all they had to say to the woman was âdo you want a caution or a criminal record when you go up before a magistrateâ. Naturally she will think that the caution is not a criminal record and is not recorded anywhere and doesnât affect her job. Unfortunately this is not the case. A caution is still something that appears on your record and can affect your CRB results. Normally it shouldnât stop you getting a job because an employer will be able to see the caution, ask the employee about it, and understand the situation. However we are still in the clutch of a statist government where ordinary people are scared to do anything because they have had responsibility taken away from them and so they darenât use any initiative or common sense and take the word of the CRB as gospel.

The other reason why she was cautioned, or rather persuaded to sign a caution, is because the police didnât actually want to go before a magistrate as their case would get thrown out of court and they would become a laughing stock. Opps, theyâve still become a laughing stock. They may get away with it sometimes, but to avoid becoming a laughing stock they have to get away with it every time and the public does contain the odd person who when they realise theyâve been hoodwinked makes a fuss. Better to do a proper job and show that you can be trusted than to make an arse of yourself by cheating.

The reason why the magistrate would have thrown the case out? There is no legal minimum age at which you can leave your child alone, though you can be charged it was shown that the manner in which they were left alone was likely to cause unncessary suffering. Guidance is given by many busy body organisations who think they know better than the parent. Though the NSPCC unusually actually has reasonable advice and says that itâs up to the parent to decide. Though when its been put through the MSM mill it comes out as âBut children’s charity, the NSPCC, advises that children under 13 should not be left at home alone for long periods and children under 16 should not be put in charge of younger children.â

Should the police have even talked to the woman and given her advice? Because, you know, the house could have burnt down and we would all be talking about the cruelty of the woman leaving her children to die in a fire. No, not even then. We arenât in a Minority Report state yet. We canât predict the future and we shouldnât even try to because that just leads to the state where we bubble wrap ourselves because there could be an accident around the corner.

“Children are becoming less competent because they are being treated like carefully protected pets.
“Unless you let them take on chores and take responsibility for their own behaviour and learn to deal with real time, space and people, you won’t be able to leave them in charge of another child.”

But she also says such state interference, including the recent threat of more criminal record checks for people working with children, means people are ceasing to use common sense and losing their own ability to judge other human beings.

“We are almost legislating ourselves into a world built on accountability procedures and bureaucracy and statistics, and that’s a very unpleasant world.”

And this is, she says, fast making the UK a laughing stock among its European neighbours, where a 14-year-old in charge of a three-year-old is considered normal behaviour.

Not many in the MSM are saying – donât be stupid, look at the child and decide accordingly. All of them are saying âooh, the government hasnât told us what to do, we should clamour and pull at mummyâs skirt to be told what age is appropriate because we canât work it out for ourselvesâ, whilst the libertarian blogosphere where is on the right track. Even the left are a bit perplexed by the situation. Well that is the only conclusion as Iâve havenât spotted anyone saying that the police did the right thing and the left leaning blogs are a bit quiet on this subject, but Iâm happy to be corrected if anyone knows better.

In the long run, more parents will err on the side of caution and not leave their kids alone at all. The end result, more kids with behavioural problems as they havenât been allowed to cut lose and gain their own identity. Itâs all part of the nannying culture. The state nannies the public, NGOs and quangos nanny the public, the council nannies the public, and the parent nannies the kids. Well would you want to be left out?

If parentâs arenât sure about what age they can legal leave their kids alone then they do need telling. And that advice is (in a nice short, easily understood way) âYou can leave your child alone, at any age at which you yourself are comfortable with doing so – based on the childâs age, common sense, responsibility, experience, and the situationâ.

Sadly too many people, especially nice people unfamiliar with the system, view a caution of some kind of get out of jail free card. It is not, it is an admission of guilt and this woman has become a Sanctioned Detection (solved crime) for the old bill.

Yup, never ever accept a caution. Say nothing. The police are NOT your friends!

How about minimum age to join services, kill and be killed? It used to be 17… not sure what it is now.

JuliaM. Thanks for that link which I’ve seen before & circulated to my chums before losing it.

In case anyone here reads it and thinks ‘No way, I couldn’t. It can’t be right”, desist and believe every word. Trust me.

Refusing a caution may not help if a person wishes to work with children or vulnerable adults. The mere fact that a person has been investigated by the police means that a record of the incident may be recited on an enhanced CRC. The procedure has been “approved” by the Supreme Court.

I understand no psychics will be affected by the proposed expenditure cuts.

My 14 year-old regularly baby-sits his nieces and nephews and he makes a much better job of it than I do. I know it’s a cliche but I really do wish the police would find better things to do.

Incidentally, I wouldn’t be too sure that magistrates would throw out such a case. In my experience, they occasionally demonstrate a groupthink that accepts any old nonsense from the police. Consider, for example, the infamous case of three of our finest setting upon a soldier:
http://www.youtube.com/watch?v=KH8unXc5Vxk

Despite seeing the video evidence, magistrates still found that the coppers had been assaulted. As Anna has frequently noted, once ‘the authorities’ conspire, there is a world of difference between law and justice.

Someone who refused to accept a caution and opted for a jury trail and won.

But note that the magistrates court wanted to give her a caution!

When you think about the constant stream of propaganda aimed at convincing people they are not equipped to face the world alone is it any wonder people run away from personal responsibility.

There were two people on a daytime TV show this week, one an Anglo – Chinese mother who has written a book about bringing up her children according to oriental faimly tradition, the other a British ‘parenting expert’ who was horrified at the discipline selfrespect and work ethic being instilled into these kids. She had little to say about the love they wre being given.

I don’t know if the parenting expert has children but if she has I know whose I would bet on to grow up bright, confident and free from neuroses.

Presumably it’s OK for a child under 14 to be left alone, outside in the street, or in someone else’s home, possibly at risk from kidnappers or paedos, but not within the relative seurity of their own home!

The leaflet actually says “If your child is under the age of about 12, they may not be mature enough to cope with an emergency. They should not be left alone for more than a very short time.”

So its ok to leave the for a short time. Short time is not defined but I read that as under an hour or at most a couple of hours. But as it says many kids are not mature enough, some are very mature.

Though one section by Eileen Hays, a parenting advisor, isn’t that helpful. Such things as saying “It is never OK to leave your baby alone in the house, not even for a few minutes. What if she had woken up just after you left? For a baby, 15 minutes is a long time to feel abandoned and left alone to cry. The risks are dangerous too â what if you were delayed or your baby was sick?” I don’t think letting a baby cry for 15 minutes is going to harm them for life. In fact some parenting styles encourage parents to ignore their baby’s crying for longer. And if your baby was sick you wouldn’t leave your baby in the first place.

Too much advice and not enough promotion of common sense.