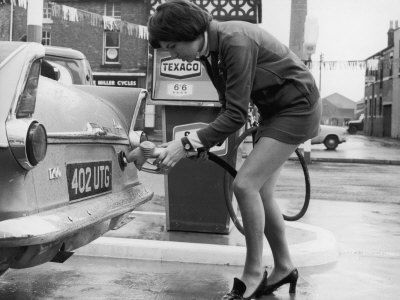 I’d like a show of virtual hands, please, from those readers who have recently filled up their petrol tank with the usual care and control and yet who have arrived at the cashier’s desk to find that they have over-shot their expected sum by the aggravating 1p.

This has happened to me a lot recently and, since I am sporadically required to examine other people’s petrol receipts each month, I notice it has been happening to other people too.

When I last filled up, having noticed that neither I nor other people seemed to be able to pay a ‘round figure’ for their motor-fuel, I resolved to put a mere £30.00 in my car’s tank; I had that sum in cash in my purse and I knew it would get me through the rest of my work-travel week. Confidently, I watched the rolling-total with as near to an eagle-eyed stare as I could manage. I eased my grip off as I neared £30.00 and watched the pump register the ponderous trickle I was allowing into my tank only to see … £29.98, £29.99, £30.01.

Crossly, I sluiced a bit more juice into the tank, determined not to pay an extra 1p and thought I’d be able to stop at £40.00 on the nail. Once more I dribbled the unleaded in at a pedestrian crawl until I reached £39.97, waited considerable dreary seconds until I’d bought £39.98, waited a few more interminable seconds until the display read £39.99 and felt I knew when to expect the resounding £40.00. Foxed once again, the dial skipped £40.00 and flew straight to £40.01.

By now I was enraged and set about getting the next – and originally involuntary – £9.99 into my tank as fast as possible so that I could dribble towards my absolute day’s limit of £50.00. See previous paragraph for details of careful trigger control. Same attention to detail, same inexplicable overspend.

Boy, was I cross.

Having ‘returned’ the petrol nozzle to its cradle with as much violence as I could without actually breaking it, I strode to the garage office with purpose verging on menace, as I am sure the CCTV footage would prove, had things actually come to blows.

“I only wanted to put £30 quid in but your pump put in £30 quid and 1p, so I went for £40 quid because I always put in round figures but then it went to £40 quid and 1p so I tried for £50 quid and guess what? £50 quid and 1p. I’ve already spend £20 quid more than I wanted to and I’m not paying the 1p. I’d like not to pay the other 2p either but I’m not going to push the point now. Suffice to say that either your pumps are set to run over by 1p or you’re pressing a button behind the desk. Which is it?”

So, come on, who else has suddenly found they can’t manage a round sum at the petrol pumps? We all know petrol and diesel are already cripplingly expensive and are taxed to keep the country afloat. But we should still be able to pay what we want and when we want each time we visit the garage, shouldn’t we?.

So who is getting this extra 1p? The Government? Yes, sure, because each 1p will be subject to its own infinitesimal bit of tax. The petrol stations?

Only data can tell us that.

So. Hands up. Anyone else noticed this?

Do psychologists have a name for this strange compulsion of trying to put a
round amount in? It seems to be very widespread, judging by the comments.

I either keep going until it stops automatically, if I’m feeling flush, or
I just stop when I get bored.

The only time I can ever remember doing this was not long after midnight,
New Year’s Day, 2001. I put £20.01 in (extra penny on purpose). The cashier
didn’t bat an eyelid though.

here in NZ all pumps are eqiprred with a keypad that allows you to enter
the dollar (and cent ) value of petrol or diesel that you want. And to think
you guys once ruled the world

Why on earth would you do anything except just fill up till it stops?

Anything less just increases the frequency of visits to the pumps, and
frankly I have better things to do with my time.

Funny, this only happens to me when I pay by debit card. This could explain
why there isn’t a pump attendant any more.

I find the implications of this most sinister…
Sister E

It invariably happens to me that I overshoot the desired amount by 1p – but
it wasn’t always so. Either I’m getting old and my reflexes are slowing down –
or the pumps have been rigged to exceed the round-pound sum. And Morrisons
don’t have a bowl of coppers for the unfortunate suckers. After all, they’re a
Yorkshire business… nuff said?

Many stations now have a pile of pennies to help out people in a similar
situation.

A song from the same era as the pic.

When we got our little diesel Micra a few years back it would take £35
maybe £40 at a pinch to fill it to the brim. Now it takes £50 when the low
fuel warning light comes on.

I fill in a different style. I go for even numbers on the amount of fuel
rather than the money. So I fill my van with 20 litres at a time.

Well, I’m off for a night by the seaside now and expect at least one visit
to a garage before we’re home again. I’ll let you know how the latest round of
Roulette goes.

That is a little game I used to play when I filled up. Seven times out of
Ten I would win and manage to put a round figure in the tank. Not anymore. Not
the game anyway.

I bought my latest car a little under 15 months ago and I am so outraged
that it costs £15 more than it did a year ago to fill up that the odd penny is
but a trifle and far too little to worry about.

The only parallel I can think of that sums up the greed of the government
is that, back in the bad old days of Soho, you might end up in a joint that
sold you fizzy pop as champagne, worth about thirty bob, that tasted just like
cherry cola, but cost forty five quid.

We are being robbed by people who think it is ok to tax our income, collect
tax on a vital necessity, and then add another tax on top just to demonstrate
what suckers we all are. Triple tax, one on top of another.

The assault, for this is what it is, is an assault on the working classes.
And I don’t mean people who keep ferrets and drink stout. The working classes
are the ragged trousered philanthropists, the people who earn an average wage,
depend on no benefits and pay their way. And the burden they carry on their
shoulders is breaking their backs.

Hear hear! Parliament no longer functions in the electorate’s interest
and we urgently need a new mechanism to prevent our government robbing us
blind.

Gloria, this is your version of the old game of Forecourt Roulette, played
in the UK since the time of the first Elizabeth. For even more entertainment,
trying holding the thingey down with eyes shut, trying to guess the moment
when to release it.

Great fun for all the family!

I stopped worrying about that years ago when I stopped paying cash for
petrol. It was around the time that I realised that petrol was getting so
expensive I was afraid to carry that much cash on me. Sorry, being serious it
was around the time of the fuel protests and to make sure I wouldn’t run out I
simply filled it to the brim, and would have rammed it down with a broom
handle to get in a little more if it had been physically possible. And
afterwards I found that it was just more convenient to do one big fill up when
I needed to and never went back, and since when the pump stopped it would
virtually never be a neat number I started paying on card and brimming the
bugger every time. The final twist is that since moving to Oz I do sometimes
put in a round dollar amount if I don’t want to brim it. This is because over
the course of a week the price of petrol here goes up and down like a bride’s
nightie. Currently Thursdays are usually cheaper but the price then goes up
quickly from Thursday evening rush hour to peak at the weekend. If I’m low on
fuel at the weekend I’ll only want to put it $20 or $30 to last until it’s
cheaper, and since the pumps can be programmed to deliver a dollar amount
going over isn’t a problem. In fact it’s a bonus if you do as long as it’s
less than 3¢ – because of rounding to the nearest 5¢ after the 1¢ and 2¢ coins
were ditched running up $20.02 will cost you $20 exactly. Of course, that
would probably just mean Gloria Smudd cursing at $20.03 and aiming to go just
shy of another ten bucks.

We shall all be suffering fromtinkering with the pennies – the boy Osborne is playing
silly-buggers at the pump, too

This is nothing new: http://www.youtube.com/watch?v=gu77jGRP4FI
Scroll in 55
seconds from the start.

Yup. That could have been me.

Only Mel Smith is better-tempered …. and better looking.

I love it when you get angry – and smell of petrol. Actually, I just put in
40 gallons a go for all the cars. Toodle pip.

But there is also good news – the new pumps at Esso Forest Row, Sussex,
allow you to pre-select any number of whole pounds with 2 buttons, one for 10s
and one for single pounds. AND it stops on the correct amount too.

That’s a sensible move, and solves the problem. I assume there is
provision for a £100 button he thinks cynically..

But how do you know if the pump hasn’t merely delivered £29.99 worth of
fuel?

I always assumed that part of the problem was simply accuracy. It’s been
getting harder for many years because in the past a penny worth of petrol was
measureable. Nowadays the vapor in the nozzle probably represents at least a
penny’s worth.
Also electronic pumps will no doubt be set to round to the
nearest penny by the manufacturer, not like the rotary ‘spinwheel’ dials of
the pumps we grew up with.

each 1p will be subject to its own infinitesimal bit of tax.
Not
all that infinitesimal – about 0.6p per penny – most of it in fact!
By the
way, is that a recent photo?

It’s the most recent photo that didn’t break the camera, yes.

Well my last diesel ‘fill up’ (disclaimer. My vehicle mainly runs on veg
oil whichever variety is cheaper at Twatco but on occasions I am caught short
so have to put the tax on tax diesel in) came to £10.01.
Without so much as
bat of an eyelid the young chaps said ‘”Pump 7, that’ll be £10!”.
Seems
this garage has the common sense to keep a bowl of pennies handy to keep the
till balanced. They don’t have any ‘give me your change’ charity boxes near
the till either just a dish for pennies.

Unless your car is very forgiving, untreated vegetable oil will cause
long-term problems. Turning it into proper diesel is simple and cheap, using
methanol & caustic soda – a web search will find any number of sites
about this.

The secret is to buy £39.99 or whatever. Leave the accumulated pennies in
the car for when you forget.

I run on gas. It’s good value, but slows down as the pressure builds in my
tank. It does make it easier to judge, but it’s bloody slow, nevertheless.
Don’t get behind me in the queue.