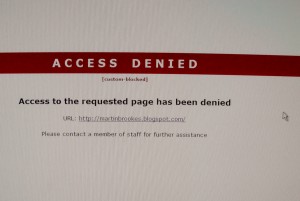 Censorship of the press is considered a heinous crime best avoided even by those political parties who would cheerfully see the UK emulate North Korea in all manner of things.

Can you imagine the outcry if Oxfordshire County Council formally announced that no longer could you read the Guardian in their public libraries because they disliked an article published therein? Twitter would be ablaze, journalists outraged, and questions asked in parliament!

Yet just this week alone, a similar fate has befallen two bloggers, and the silence is deafening â even from within the blogosphere.

The blogsite âNutsvilleâ has upset the Westminster Council head of legal, Peter Large. Quite apart from the usual threats of action for defamation, including demands to the web host asking them to censor the posts â they have also blocked the web site from being read in council premises, which include public libraries. The FOI request that has been sent to the council asking for the reasons behind this move â and pointing out that it may be in partial violation of The Human Rights Act 1998, Article 10, Freedom of Expression â must be answered by 23rd February, and may also produce a list of other political sites blocked by the council, which should be of interest.

You may want to read the full story on Nutsvilleâs own site.

Up in Rutland, a similar fate has befallen Martin Brookes, who specialises in stories regarding his local Rutland Council. He too, upset the council. His site is also blocked in public libraries.

If a site should host material which is defamatory, then taking legal action is perfectly acceptable â it is a risk that all bloggers must run, and we should comply with the law.

However, local councils taking pre-emptive moves to block a web site from being read by those using their public libraries, before any such defamation has been shown to occur is another matter all together.

Why is this considered acceptable against bloggers, but would create outrage if practised against the main stream media?

Is anyone aware of other instances of bloggers being censored in this way?

Do any of you have the time to drop a FOI into your local councilâs IT department to see how wide spread this practice is, and which blogs are involved, so that we can get a picture of what is happening country wide?

We need to nip this one in the bud â public libraries may be run by local councils, that doesnât give them the right to decide what we read.

My MP has replied to my email highlighting my concerns about this. She
isnât aware of this happening within her constituency, but sheâs going to make
some enquiries about it with colleaguesâ¦

This seems to be an on going thing between the blogger and the Rutland
County Council if you read the posts. As far as I can workout he was an
ex-councilor who was bullied at best by the other members of the Council. It
would seem the Council have have the police reading his blog and have tried
all kinds of things to stop him having a say. Something is fishy here. If it
was just a case of him being a nutcase then why would they bother? It looks
like there there must be something in what he is saying for them to feel
threatened. Maybe it is the truth. From the blog, you get the picture that the
Council is secretive at best and at worse is there is something more sinister
going on. Whatever is happening this man should have his say as long as he
doesnât break the law. The people of the area deserve to know what is going
on. It is up to them to decide who is right in this fight.

Didnât one of your ancestors do rather well for a time applying the
âsomething sinister going onâ principle?

Herein lies the crux of things. I donât have aproblem with you disagreeing,
even though I have to say, I support the main article and the other comments
up to now. The point, is free speech. If you donât agree with us, well, to a
sensible extent, I guess itâs all right. You can have your opinion and voice
it, in a society tolertaing free speech. I donât think, by and large, we would
try to silence you. Of course, the final decision on what is tolerable, on any
specified website, is up to the owner, or those they place to act for them.
Posting on any other personâs website implies acceptance of this, I suppose.
One canât really complain and be taken seriously, if they take issue with
something and delete it. I happen to be the owner of certain sites on totally
different, non-political subjects, and although I donât have time to
personally moderate, Iâve given that power to others, with very specific
instructions. I honestly donât think theyâre limiting free speech, just being
sensible. Concerning the thrust of this article, I am indeed concerned as the
others are, and I have to disagree with you, with all due respect.

Apologies, some have replied since I wrote that! It was meant to speak
with the obvious poster, not you folks.

Truro Public Library have been blocking selective blogs since 2006 to my
certain knowledge, as have others in the UK. If you want to blog, better not
use public libraries is my experience.

Ah well, back to one of those free-internet cafes called âThe Apple Storeâ
to read the latest Obo rants; and, reminisce on the remains of GOTtyâs
blog.

Not sure I get the âFreedom of Expressionâ argument. Youâre free to write
what you like. Iâm free to read it. Not sure that it follows that the State
must therefore provide a web connection so that I can read it.

As far as I can see, itâs just the digital equivalent of âsorry sir, we
donât stock your particular genre of conspiracy theory DVDsâ, have you tried
the local HMV?

The state doesnât have to provide a free net connection for you to read
your âfreedom of expressionâ. However if it does provide it, it shouldnât
censor it.

If this is a case of swear words, then 90% of the internet will need to
be filtered leading to âclbutticâ issues.

If this is a case of some disagreement then the council should follow
proper legal channels to stop the blogger. People can still read the blog
elsewhere so banning it in a library just means those that canât afford a PC
or net connection canât read it which is becoming a smaller and smaller
proportion of the population. In other words ineffective.

If itâs only a single person in the council who is affect by the bloggers
comments then using the councilâs power to ban the blog is pretty much
malfeasance in public office.

âHowever if it does provide it, it shouldnât censor it.â

Right. You should be able to do what you like in your local library
without fear of censorship. Off to dust off my vuvuzela.

Look, maybe the council are being a bit precious, but I donât think we
need to call in Amnesty International just yet.

No, that would annoy other people in the library. More like you can
go into a library with your book written by Alistar Campbell or Hitler
or Mao and read it without the library saying that itâs not allowed.

@Dennis â No, because the library is not re-publishing it, only showing
it.

Libraries do not need to republish, they are caught by the dissemination
element of the tort. On the finer point of not disabling: I donât know. I
have looked, and although Iâve not found anything I would call certain, I
believe libraries are, at least, at risk.

I found further protection may be provided in the proposals in the new
Defamation Bill.

I have not researched the law, but if a library has been made aware that a
particular web site contains allegedly defamatory material, wouldnât it leave
itself open to a claim in defamation if it failed to block the site?

The BBC has put a âprofanity filterâ on newsnet scotland as
have certain councils in Scotland. If one puts ânewsâ ânetâ âscotâ and âlandâ
or just the title of an article within a posting it will eventually get
moderated out as breaking house rules.

Maybe the Guardian will do a feature headline on it, since it violates
basic human rights, freedom of speech and diversity of viewpoints, all those
things the left-wing upholds. Or else, maybe not. With MSM itâs not so much
outright lies as it is omissions of factual stories. Better watch out
reporting on it here â or else they will censor this blog next for daring to
report a fact of tyranny.

Websense has just done an update and seems to be part of the problem, itâs
not just bloggers, various internet forums have been blocked too. Strangely
enough they seem to be what is classed as the âfar rightâ yet leftist sites
such as the vile UAF and SWP have been left alone

The London Borough of Wandsworth keeps a fairly tight rein on what can be
accessed from its computers, whether in schools, colleges, libraries, or
council offices. Will check tomorrow to see if youâre on their âblockedâ list:
the ill-tempered and profane comments on Guido Fawkesâ site certainly are.

Anna: Your blog is safe from Wandsworthâs overenthusiastic censors. For
now.

Sometimes. It uses a thing called Tru-View to decide which bits of your
blog are too saucy for consumption by its citizens: âToo stupid for sex?â
triggers it, for example.

Very interesting, Anna. Sometime you wonder just who some of these people
think they are.

Perhaps I had better pay closer attention to my Rotten Boroughs series of
posts in the light of this!

Iâve emailed my MP and flagged the issue. This sounds ominous, doesnât
it?

Ditto, though my MP is worse than useless.

The Egyptian government has been censoring bloggers too, recently. When
they do it, we call it tyrrany.