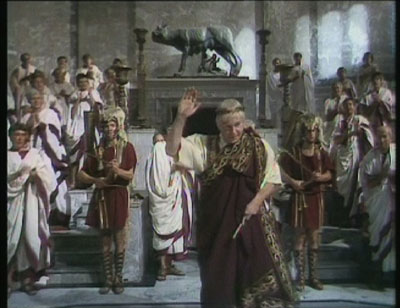 The Labour Party has a faux election where the crown of Imperial Marxism is at stake after the mob (us) have deposed the previous Emperor. Two effete  brothers fight to the death, both sons of the rich house of Ralphus Marximus Maximus Germanicus. The younger brother has the support of the praetorian guard of  the Unions and is elected Emperor. The losing brother retires to the Northern frontier to lick his wounds and become the director of a football club.

Meanwhile lurking at the back of the Senate, is the leering former hardman of the previous Emperor Brownus Maximus Cockupus, Maximus Selfinterest Ballsi and his scheming and ambitious wife,Livia Yvetta.

The Imperial Emperor of Marxism has a right hand man Alanus Johnsoni.An acolyte of Selfinterest, Spadus Belardinelli decides to investigate and find dirt and scandal upon the Alanus familia.

He discovers rumours abound about Alanus and his fidelity, Alanus wife is also alleged to be having an affair with a lowly slave of the State, one Closus Protection Squadus.

The die is cast, the knife is flashed, Alanus is to be exposed in the forum in the Sunday scrolls courtesy of Spadus. Squadus is called before the Leader of the Praetorian Guard for unprofessional conduct, Alanus resigns, the Emperor is aghast ! Infamy Infamy they have all got it in for me !

Maximus Selfinterest and his wife Livia Yvetta move one step closer to the throne they want and need with all their being.

You cannot make it up.

Unfortunately I cannot take credit for this as I read it in a comment a
year or so ago:

“The ancient times had Pericles, Damocles and Heracles, unfortunately today
all we have is Testicles”

So, the company almost goes bust, but the shareholders vote out the board
in the nick of time. The previous directors bicker amongst themselves and the
former chief assistant to the finance director is appointed by the wannabe MD
to the position of finance director designate. They all then try to persuade
the shareholders that the arsonists are the best people to fight the fire,
advocating the method of fighting said fire by throwing petrol on it.

Engineer has summed the position up quite nicely. Lets take the man with
equal responsibility for the parlous financial state of the country and let
him pretend it wasn’t his fault and that he knows how to solve our
problems.
If it wasn’t for the fact , this is the labour party we are
talking about, it would be unbelieveable.

Yes, nice one Andrew! Though I find it hard to believe that Maximus
SelfInterest could possibly hope to achieve the Emporership with a cognomen
like Balls.

There was once, long ago, a marriage in Germany or Austria, where the two
parties were respectively Koch and Kundt. I’ve no idea whether there were
kids.

Maybe Ed could become Ed Cooper. After all, Harriet Dromey doesn’t seem to
like her name either.

Palaestinius indeed if we are in the Foro Romani

Of the race of balls. Ballsii

I was going to do something along these lines, but you beat me to it. Nice
job.

What is the vocative of ‘Balls’, though? Ballse?