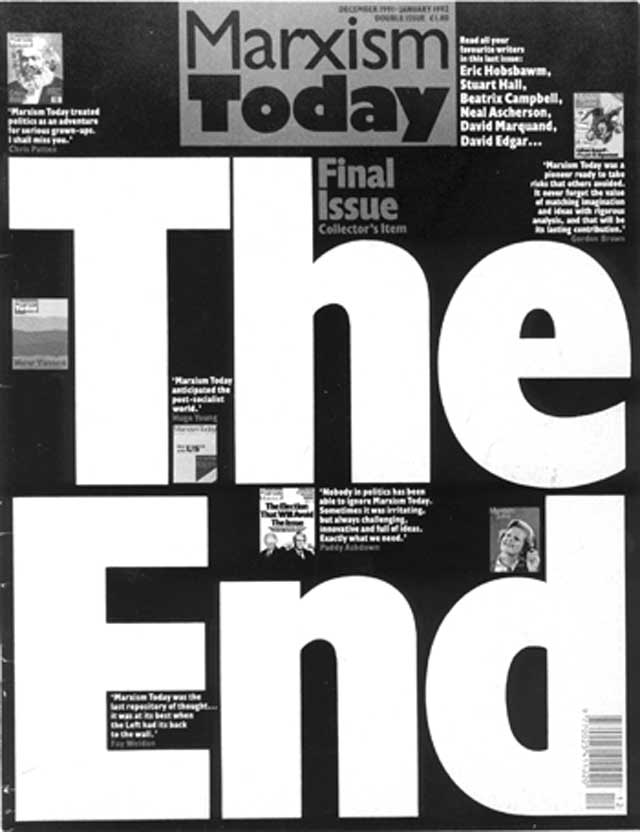 I was clearing out some papers over the Christmas break and came across various educational certificates dated from the 197oâs (when I was but a lad), and a copy of Marxism Today, then over on the Radio came an interview with Eric Hobsbawm who is now a venerable 93 years old and has the historians eye for evaluating the present with a sure knowledge of the recent Past.

This syncronicity was quite nostalgic as Hobsbawm was a regular contributor to MT and I had the pleasure of attending a number of his lectures as a flair wearing student with unruly hair. I was however always on my guard against his uncritical Marxism, as I was with another of his contemporaries Stuart Hall. This was the world of the History Man personified and I was there !

Hobsbawm was an impressive speaker and unless you were aware of his personal history and political affiliations you would listen to him and be quite comfortably drawn into his world view of class struggle.

Martin Jacques the last editor was an erudite intellectual always seen on the BBC as the acceptable resonable face of a philosophy that spawned Stalin,Pol Pot and other such humanist political leaders. Marxism Today was after all the in house magazine of the CPGB. Jacques believes that Marxism Today was easily the most âinfluential political magazine between 1978 and 1991. My rotting copy predates 1978 so I could not comment, but with my ageing eyes and historians 15 yard swimming certificate behind me, as a primary source it is telling how out of touch the contributors were with the real world going on outside their ivory towers. The talk of the âproletariatâ and of âcontinuing the revolutionary struggleâ de dah de dah. This was the comfortable middle class marxism beloved of Baader-Meinhof or  the current practioners of Radical Chic.

As they propounded there theories of class struggle, the aspiring mondeo man voted repeatedly for the free market Thatcherism against the dinosaurs like Scargill. The Wall came down in Berlin, Eastern Europe was set free and Soviet Russia imploded. The CPGB folded along with it Marxism Today which was a bit of a surprise to Jacques and others.

I now realise in my mid fifties that I was part of that history, but as it is with history the  present is created out of the seeds of the past.

In Milibandism, the unblinking, out of touch with the âworking classesâ theorising Marxism still lives on.

Hobsbawm is the last survivor of the âuseful idiotsâ, apart, of course,
from Tony Benn and Gordon Brown. Marxism and Socialism have one thing in
common â they both kill people; lots of themâ¦

Marxism has always had many of the elements of a religious cult; its
adherents are deliriously oblivious to its rational aberrations in theory
(theology) and its patent moral bankruptcy in practice. After all, it defines
its own reality; everything else must therefore be shoehorned to fit its model
â whatever the human or economic cost. The Marxist heaven (eschatology) is
some earthly utopia â forever a work in progress, never nearing completion â
and its Nirvana is some blissful social order which arrives at the end point
of a Hegelian dialectical historical process (which is its hat tip to the
supernatural). The proletariat is a construct of the theoristsâ imagination â
personified in the iconography of the victorious drones in Soviet, Chinese and
North Korean posters. The reality is cynicism, hopelessness, poverty and sheer
drudgery on the part of the non-members.
I see many parallels with the
obscurantist prattle of the parliamentary Fabians today. They simply are too
blinded to the glaring errors of their ideology to listen to the still small
voice of reason â whatever its source. It stinks. May its demise come quickly
â and finally. Rant over.

Spot on! The dreaded Milipedes are out of their time. Even Russia is not a
communist country these days, and China is embracing a sort of free market. To
find a truly communist state you have to look at North Korea.

But Ed would not be at home there because no-one would be listening to him.
Perhaps we could learn from that?