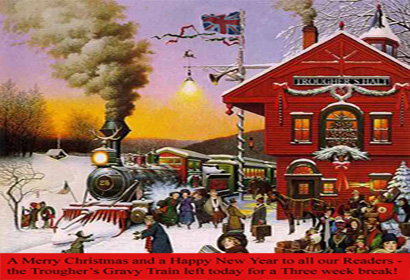 Merry Christmas to you and the team Anna and to all your regular
commenters. Thanks for all the entertaining posts throught the year.

And a Happy and Merry Christmas/Xmas to one and all from me and wishing
everyone a Happy and Prosperous New Year (once we get the troughers out of the
way!)

Brilliant! I chortled so much it even exceeded the hilarity brought on by
St Vince Cable boasting about his nuclear weapons.

I think that ranks (yes, it is an “r”) as an all time Smudd classic. Well
done and I wish the Smudd household a jolly and festive Christmas with copious
amounts of Werthers Originals.

Another year, another round robin …

Sickeningly smug greetings from picturesque Smuddland where robins perch on
spades outside the door and every day the winter sun rises above a blissfully
happy and successful home. So, …

2010 has been so eventful and so packed with achievement it’s hard to know
where to begin the list of personal triumphs, but I know you’re all so keen to
know everything so I will try! I hope I don’t leave anything out! If I do,
I’ll put it in next year’s Xmas card…

Remember last year I told you how Old Smuddy’s colostomy bag gave out
during Smuddette’s kazoo solo in the Asbo-Leavers’ Music and Movement
Christmas Special? Oh, how we laughed!!! Thankfully, he’s got to grips with
his new one which finally arrived at the end of March and since then we have
had almost no leakage at all. We’ve treated ourselves to some lovely new lino
throughout the house and I’d never choose anything but ‘wipe-clean’ again! The
rest of Old Smuddy’s back teeth finally fell out after all those toffees last
Christmas but the front three seem to be hanging in there. Just one more to
go, then his grin will be symmetrical at least.

Great news about my glass eye, though! After enduring 3 years of what
experts describe as “a baffling inverted-swivel situation” I’ve now been
fitted with a lovely new one which stares almost straight ahead and is only a
few shades off a total match. They’ve even blood-shotted the white so it’s
virtually impossible to tell which one is the “Columbo”! I can’t tell you what
a boost it’s been to my confidence and I’ve started attending the village
rug-tatting circle once more. It’s lovely to be back among other overweight
and partially-sighted friends and a steady gaze has helped me cope with my
otherwise relentless ill-health. I’ve been at the doctor’s almost constantly
this year and finally I’ve been told that I have a very weak intellect and a
vivid imagination. Apparently this is an unhappy affliction and nothing can be
done but at least it’s nice to have a proper diagnosis.

Smuddette has had a lovely year, not least because the police finally
lifted her curfew and she’s been able to spend a lot more time with her
friends, both outside the Off-Licence and on-line. She’s started yet another
school and so far it hasn’t burnt down and she hasn’t been asked to leave!
She’s gained her Grade 1 on the ukulele (third time lucky!) and has also been
put on ‘The Watch List’ by the headmaster! Result! She seems to have a natural
talent for creative writing, judging by the heap of letters explaining her
absence that I was called to the school to verify! Academia aside, having yet
another infected ring through her lip doesn’t seem to have put her off and
she’s applied to do her Work Experience in Ted’s Tattoo & Piercing
Parlour. She’s designed some lovely skull-based tattoos and will be happy even
if all they let her do is apply the TCP. She’s a lovely girl and doesn’t plan
to be pregnant for at least a year.

Smudd Junior is still really interested in Law and we’re always amazed to
hear how much he knows about it! He’s forever being invited to attend the
Magistrate’s Court and just recently he’s been selected for something called
Community Service which I think is a bit like College but without the
lectures. He’s also making quite a name for himself in the field of art; Old
Smuddy and I very rarely drive anywhere without seeing Junior’s ‘Tag’ on some
underpass, bridge or shop front! He must be very good with those aerosols now
because he’s forever in the garage giving a car a re-spray! I do wish he’d
leave the door open when he’s doing that but he’s adamant that he has to work
with the door firmly locked and is only in there between three and four in the
morning (something to do with his creative flow he says!). I’ve never seen any
of his ‘spray-jobs’ either because it seems that the cars’ owners can only
collect them before 6.00am and of course I’m in the middle of my beauty-sleep
by then! For the sake of his lungs if nothing else, I’m glad he’s persisting
with his market-garden venture in a few of the Nissan huts on the disused
airfield just down the road. He’s seen a gap in the ‘tall, five-pronged-leaf
lettuce’ market and I’m with him all the way! “It’s Hydroponics, Mum”, he said
to me only last week, “It’s Hydro-bloomin-ponics and it’s my ticket outta
here.” His business must be going so well he’s started bringing some of his
exotic, tall lettuce plants home and putting them in a specially-lit room.
Ultra-violet light seems to be the key and hermetically-sealed doors are
vital. He’s always been very good with science and biology and the like and
now it seems he has a business head on his shoulders as well! Mustn’t ‘crow’,
though, must I? Gets right up people’s noses, doesn’t it???!!!

Ah well, I must away and finish hand-making all my crystallised cherries
for my sugar-crafted festive cake!

Wishing you all an envious Christmas and a thoroughly-trumped New Year,

Your friends (although we haven’t actually seen each other for the last 27
years) and competitors,

Gloria!
*beams with pleasure*
You weren’t supposed to drink it –
not all of it at once anyway…….

I didn’t drink it … you led me to believe that bottle of special
unguent was anti-wrinkle ‘creme’ so, of course, I applied it liberally to
my vulnerable under-eye ‘crisis’ area. Now my under-eye skin is competely
pickled and my one good eye is on the tilt. And a Happy Christmas to you
too! Grrrrrrrr……

My mistake, I hadn’t realised the fumes were so powerfull.

A joy to see you back in such fine form and a very happy Christmas to
all Smuddles.

(Try a drop or two on your corns, very effective I am led to
believe)

Thank you for the update Gloria. Glad to know everything is well with the
Smudd family although I haven’t laughed quite so much I last shut my foot in
a door.

How great to hear from Gloria again – hope things are a little better,
ma’am. Now all we need is a word from Gildas then Christmas will truly be
Happy. All the best Anna and thanks for making 2010 a delight.

Happy Christmas to you too, Anna.

I’ve posted a video of me playing some carols on my blog – if you want to
get in the festive spirit … don’t visit !

Sorry, I’m a bit confused here. Which troughers’ train is this meant to
be?

Er, apart from the above, Merry Christmas to residents of this blogoregion.
2011 can’t be worse than this year? Can it? Oh gawd!

The Troughers gravy train looks distinctly North American to me, indeed the
star-spangled banner either side of the cow-catcher and the moose antlers
above the lamp rather give it away. Besides we all know british trains do not
run in the snow.

Then we have the hostess calling herself Anna Raccoon a distinctly North
American mammal and even Gloria Smudd adding the eponymous Canadian “eh” to
her sentences. Could it be that Anna and Gloria have been disguising their
nationalities?

The question is rhetorical, but my wishes are sincere. May you all
experience a happy and joyous Christmas, where-ever you reside and whatever
condition you find yourself in.

Gloria-are you sure you did not have some “work” done during your recent
absence? You are looking refreshed and the trout pout is more pronounced.

To Anna and Mr. G. and all on these pages that bring interesting thoughts
and — most prized of all — humour :  a merry Christmas and a happy
and healthy new year.

And a Merry Christmas and to you and Mr G. as well.

Already? I haven’t got me humbugs down from the loft yet!

Joyeux Noel, as I believe they say in your neck of the woods , and Bonne
Annee (I can’t do the accents!).

I always wrench open a bag of Bah Humbugs to coincide with the first
‘festively-illuminated semi-detatched’ I see on my daily travels to and from
the Obesity Clinic. Sometimes this is as early as the third week in
November. There’s nothing for it then, in my mind, other than to choke down
another bag of chips followed by a chubby fistful of a gum-shredding boiled
sweetie. Gets me in the mood, you see.

Happy Christmas to everyone, delighted to see Gloria back!!

Suffice to say that I have foresworn my beloved Werther’s Originals for the
more traditional Bah Humbugs for the duration of the Yuletide Spendfest.

And a very Merry Christmas right back at ya!

I presume the piggies’ gravy train left from Platform 23nad a half.

(I won’t even get in to the argument about whether there ever was a
historical, physical Jesus, because the view of people like me is that it
actually doesn’t matter. What matters in my view is that by now he does exist
at least, having been believed in and fervently prayed to by millions over
thousands of years. Whether I follow the Church is another matter, but I don’t
have a problem with Christianity!)

A Happy Christmas to you and a Happy New Year, Anna. And btw, many thanks
for the mention in the Saturday Night Posts – it boosted my stats and
blog-morale considerably

Happy Christmas to you!

Hmmm, a train with a snow plough on the front, now there’s an idea…