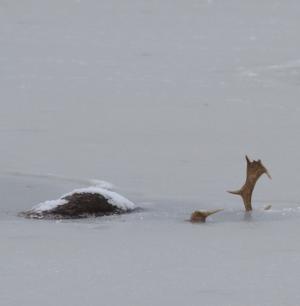 In the United Kingdom the term âCountry Parkâ has a special meaning.

The purpose of a country park is to provide a place that has a natural, rural atmosphere for visitors who do not necessarily want to go out into the wider countryside. Visitors can enjoy a public open space with an informal atmosphere.[They] may have facilities such as car park, toilets, maybe a cafe or kiosk, paths and trails, and some information for visitors.

Imagine the dumb struck horror of the city dwellers who ventured into Spennymoor country Park expecting a Disneyfied version of natureâ¦..

Why there they were, tugging little Jeremy and Jemima along to see Rudolph and Santaâ¦..and they discovered nature in the raw.

After several days of one of the harshest winters we have experienced in the UK â some of the little Bambiâs had perished in the cold, in the middle of a ruddy great lake.

âTheir fresh hoof marks could be seen leading to where they crashed through the ice to their deaths.â

And can you believe, no one had risked their lives to remove these carcasses from the frozen lakes?  The RSPCA ignored their frantic phone calls saying that they were prioritising living animals, and little Jeremy and Jemima were traumatised I tell you.

Parents, who visited the park with children, spoke of their shock, with one saying: âWe came especially to see the deer because the kids think this is where Santaâs reindeer live.â Others, suddenly realising what lay below the frozen surface, quickly ushered children away.

One woman, who asked not to be named, said: âMy son was distressed and we did not feel comfortable. It was an awful sight and nothing seemed to have been done about it.

Yes, see photograph, there is a whole antler sticking out of the snow in the middle of a vast lake.

The 73-acre deer park is provided free of charge for those who want their children to catch a glimpse of nature, perish the thought that they should do so.

Does anybody tell the little darlings where Turkey Twizzlers come from â or is that too much information for them?

What a missed opportunity. There, before their very eyes, was an example of
real life and death, and a chance to discuss these matters in a non-artificial
context. After all, kids need to know that stuff like this happens. As it is,
they grow up with a sanitised and Disneyfied experience, and then when death
really comes a-calling, they go to pieces. We can only shield kids from
reality for so long. (Second thoughts â itâs not the kids, really, is it? Itâs
the so-called grown-ups who canât face it.)

I couldnât help hearing the theme to âJawsâ when I saw that picture.
Slightly corrupted. It went ho-ho-ho-ho-ho-ho-hohoho.

I know, Satan has my spot picked out already.

I had to battle with myself not to use your superb âRudolph the Dead
Roast Reindeerââ¦â¦..

I have met a couple of people who work as eviscerators at Bernard Matthews
turkey farm and spend all day ripping the insides out of turkeys.

If you as them whether they are going to have a turkey for Christmas they
get ever so upset.

In the film âBambiâ he loses his mum to the hounds and the hunters. Also,
there are other ups and downs. In another age the beast would have been hauled
in and butchered pronto. The children would have been told to help skin it.
Practical Butchery should be in the National Curriculum.

It was Sarah Palin who done it!

Bet it has wifi tooâ¦

Anybody else think weâre losing the plot, somewhere?

Judging by the size of the ones snoring in front of the fire, Iâve got
enough for a couple of orchestra string sections!

Fear not. It comes from sheep.

Best comment on the article should go to â

Donât worry kids â itâs not Rudolph! I think for a laugh they should throw
Santaâs sleigh in there as well with just the back sticking out and a few
presents scattered on the ice.

Well it made me laugh, anyhoo.

One question keeps bothering me â where does cat gut come from?