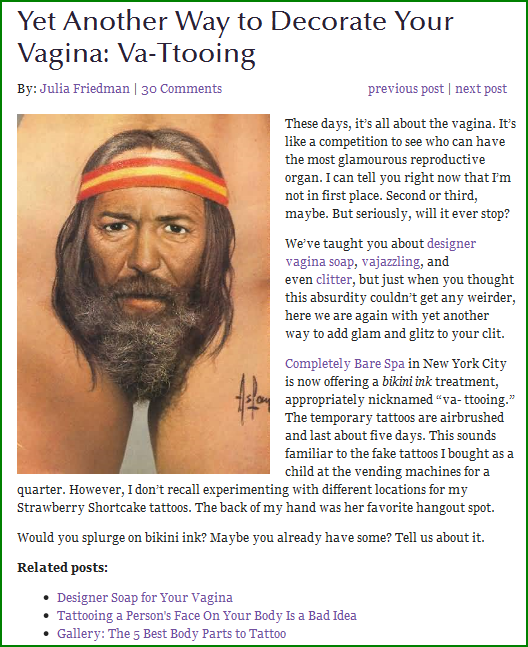 * Brilliant title, unashamedly stolen from HERE. Along with a gem of an idea to throw a spanner in the works of the latest Nanny initiative.

The latest ejaculation from our freedom loving government has already been beaten to death, blindness, and other terrible fates on many a blog. This is the first time I have seen a concrete suggestion as to what we can do about the plan to censor internet service to those households containing children.

In answer to the frequent claims of ‘how will they know’ – what do you think the ‘ContactPoint, £224 million pound database that lists all 11 million children in the UK was all about then? You think it doesn’t include their address? I have seen suggestions from the incoming government that it has been scrapped, but can find no evidence that all the databases from which it collated information have been!

Anyway, back to the lumpen suggestion firmly in hand by our limp wristed government.

So, the government have to decide which web sites they allow into the households containing those 11 million children? Content filter of course, same as safe search on Google images. Google don’t actually look at each image – they set some aside on the basis of a surfeit of skin tone – something along the lines of #FFE5B4 would have them reaching for their smelling salts – and then pass the url to the priapic pervert in the back room whose job it is to peer intensely at each candidate until his little finger drops off.

url names such as Asian Babes will be off line, as well as the health site which displayed the article illustrating this post. Anyone who complains about the disappearance of Asian Babes will be blocked for naming them, along with the many literary examples of pornography, presumably filtered out by words such as fu*k – that would have been the death of Grumpy Old Twat had he not already leaped over Blogger’s Head, hand in hand with his keyboard.

The drawback of course, is that every time someone looks sideways at an eleven year old who just kicked a football through their goldfish bowl, 74 armed policemen will raid your home in full riot gear, because you will be on the ContactPerv database…and showing up on Plod’s iPlod complete with app showing nearest available iPerv…….

I am Pornacus’ suggestion is that we each display a picture that will contravene the government regulations – the freedom of expression issues will be interesting, but as he says, ‘not that the government will give a shit’.

What will happen is that the entire Internet will eventually be blocked – and maybe, just maybe, the sofa based population, deprived of the pubs, forced to smoke outside, deprived of Anna Raccoon, Health monthly, ‘Five-a-Day’ – which the government has belatedly discovered has nothing to do with their pet vegetables; and Strictly-Come-Dancing (far too much flesh to pass the filters, and ‘come’ – Heavens- to-Betsy, smelling salts Sir Humphrey) will finally rise up and take an interest in the process by which we put these imbeciles in charge of our lives.

A forlorn hope, I’ll grant you.

Good grief, I though Call Me Dave had promised to beat off Nanny State and
drive her to suicide.

Well readers, when I comed to your “I am Pornacus” moment don’t be
intimindated. Remember, they can’t put us all in prison.

I’d like to be the first person commenting on this to say FUCK.

Frank Zappa had an admirable philosophy. He could swear, his kids could
swear, anyone could. Words are exactly that, just words. Saying “a naughty
word” and doing something harmful are completely different. I learned to swear
at age three, from people now grown and rather powerful in their own ways, but
would never harm a child, nor mug a granny, nor even pick on somebody for no
reason. I am proud to say I know these people.

I think that should suffice to elucidate my position.

Yes, I really do mean age three! I hung out with a more big and adult boy
who was worldly-wise the son of a member of the city’s football team. (My
friend was age five! Like my cousin. They made friends and they both
swore!)

Please don’t mention his litle bobble-hat, being all I could see, going
in and out of the “posh” back porch doors though, it still has me in
hysterics nearly forty years later!

Surely the answer is for everyone in the blogosphere to regularly publish
the URLs of suppliers of VPNs along with easy-to-use instructions of how to
use such a thing. Also instructions about encrypting all our emails could be
widely distributed.

So lets counter DemTories interference with our lives with something that
will make theirs harder, much harder.

I seem to recollect having seen elsewhere on this interweb thingy a
report about a lad who had a secure password (? 50 characters) on his laptop
who became a resident of one of her majesty’s hotels for failing to give the
aforementioned password to Plod. Under the anti-terrorist legislation of
course.

I missed the bit where they were going to just target homes with children.
I bet many children got their first ideas about what sex is about from some
dodgy pictures and possibly a story – assuming they didn’t just get a good (or
bad) description of the process from one of their mates.

Of course, it is fairly easy, ContactPoint might have gone, but a footnote
in some convenient Bill making its way through Parliament would allow them to
use the Child Benefit database, at least until that gets screwed about by the
entitlement changes going through.

The answer is to demand your MP answers either “yes” or “no” to the
questions:

2. Will you allow the hard drives of every computer in your 1st & 2nd
homes to be forensically examined for evidence of a visit to a pornographic
website?

So what’s the next step for Nanny? Children should perhaps be “protected”
from sites that advocate FOOD, to prevent childhood obesity. And obviously,
DRINK too, to win the war against alcoholism. OMG it’s going to be sooooo good
in the future, when our beloved government protects us by spreading its
all-embracing arms around us. And lists us on its “perverts only”
database.

At this rate, our present generation will be more sexually prim and proper
than the Victorians were rumoured to be (but really weren’t.)

Excellent piece, Anna. Unfortunately, until such time as HMG ban facebook
and ‘stenders the uprising will continue to suffer with ignorant apathy.

I’m hoping the pic I featured would be enough to class myself as Pornacus
too.

Um … the spelling is correct, I suppose ?

That achieved, the Socialists — and you must by now know that I thereby
allude to every government of the modern World, however it describes itself —
will be in a position to prevent Internet users from reading, for example, the
truth about ‘anthropogenic global warming’ and the ‘terrorist threat’.

The chap in your snapshot is a cad and a bounder. As far as I know he is
not an MCC member so what does he think he is doing wearing the colours – his
head band matches the band on the panama I wear when visiting Lords to watch
the cricket.

He most certainly wouldn’t be allowed into the Pavillion dressed like
that.

My God, I’ve just had a terrible thought. About ten years ago members voted
to allow the election of women to the MCC………oh my God. I knew it would end in
tears.

People have sex. Some of them actually enjoy it. Provided the activity is
consensual, what’s the problem? The general rule of ‘not in front of the
children and don’t frighten the horses’ is plenty good enough, and ‘parental
control settings’ have been around since the interweb thingy was born.

(or never in the New World Order)

(a site which you will visit once only or a lot)

It has to be said that men with goatee beards are constant reminders of ..
well .. take the advice of Obo and visit “guess her muff”.

Glad you like the idea, I do hope it catches on, and I LOVE the image you
picked, top drawer!