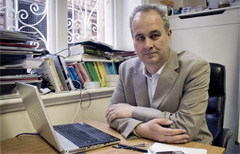 So Iain Dale has finally decided that he doesn’t want to sit permanently on top of the blogging tree, and who can blame him?

I have been taken to task many times because I refuse to criticise either Iain or Guido – and I do so for one very simple reason; none of us would be here if it wasn’t for them.

They are together the Damian Hursts of the political Blogosphere – very easy to say ‘can’t see what is so special about them myself’, ‘load of nonsense’, and even easier to forget that they broke the mould, they started their blogs when no one was listening, when there was no Iain Dale to give you a lift in the ratings when he took a shine to something you wrote, no Guido to put a link on a sidebar and give a story traction.

They did it the hard way, shouting into an empty void. I respect both of them for that.

Iain leaves behind a dowry of a vibrant political force that was unimaginable 10 years ago, a blogosphere that beats the main stream press time and again – witness Guido breaking the Bob Roberts story just yesterday, and Dizzy’s work being picked up yet again by the Daily Mail.

When we had a Nu-labour government, blogging was the way in which we fought back and exposed their lies and chicanery. It is very noticeable that now we have a Con-Dem government we have returned to the ugly scenes of the poll tax riots, Grunswick, the Miner’s Strike – the pain many of us felt under a Labour government was expressed in words, often elegant, insightful, and witty. Not with sticks and staves, and flying fire extinguishers.

We have Iain and Guido to thank for building us that outlet, and giving us an alternative to the thuggery we see now on the streets.

Enjoy the rest Iain – you will be back!

His blog started off fine; but deteriorated badly of late, becoming little
more than advertising for his radio & publishing ventures.

With so many time-consuming irons-in-the-fire his inspirational spark was
lost. And readers defected to more-interesting blogs.

Iain’s a good guy, and intelligent.
I like him, and often disagree with
his opinions.
That makes him good company.

Interesting that when I tried to leave him a goodbye message, the server
refused it!!

Personally I always found his arguments a bit one sided, but I guess we are
all guilty of that. Never liked the fact that he moderated his comments either
particularly. Tends to remove criticism and dilute debate?

Either way, it’s one less seasoned blogger which has to be a sad thing…

Some time ago, Iain stopped moderating for a day so that we could see the
filthy homophobic abuse he regularly received – it was utterly sickening and
far worse than the puerile comments on GF, and that was why he had to start
moderating.

Yes, it does rather looks as if the Left’s Sturmabteilung is back at work
again, doesn’t it!