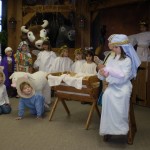 Christopher Graham, the Information Commissioner, says that taking pictures of children at nativity plays is not against the Data Protection Act. Thank god someone has seen some common sense. However the DPA is not the reason that most schools raise when they attempt to stop proud parents taking pictures of the children at key moments in their lives.

Sometimes they use the police to stop the parent taking pictures. Most of the time they trot out the excuse that paedophiles are scouring Facebook and newspapers for such photos and videos. Or if that doesn’t work that abusive parents are scouring Facebook and newspapers for photos of their children and working out which school their children go to – as if they didn’t know already. When really pushed they will allow pictures to be taken of the children but will blank out the faces of children. When all fails they can always fall back on the point that a school is not a public place and so they can impose whatever rules they like.

The ones who need a good dose of common sense are the head teachers at schools who are more interested in covering their arses and following procedures laid down by the local authority than actually teaching children and letting children enjoy being a child.

When you have schools banning parents from taking pictures of their own children it reinforces the meme that authority knows best, that parents must bow before the superior knowledge of those in charge and that the parents can rescind their responsibilities to the school safe in the knowledge that their children are in safe hands.

Those in authority will say that they know best because of a few bad cases where a parent hasn’t looked after their child properly and use these to show how important it is that they take over responsibility. Other than the old adage that bad cases make bad law, there is the case that these cases are the extreme and not the norm. The vast majority of parents do look after their children, they might not be perfect but their children do grow up to be pretty reasonable adults. The majority of children brought up in care do not turn out to be pretty reasonable adults even with the immense skills of the professionals. That’s usually because the children have been handed from professional to professional who just sees them as another case and not a person who just needs some love.

Please read this earlier article here on Anna Raccoon and sign the petition if you haven’t already and blog, tweet about it. Join the Facebook group here.

… Thinking about it, there was another occasion where the kids were running
around one of the monuments in Liverpool city centre. Some photographer
happened to snap just as the young lad came round the corner. He showed us the
pic and asked if he could use it. Again, common sense, no drama, no problem
from two parents who like to think of themselves as privacy-savvy.

You’d think common sense would cover it. My daughter recently received a
prize from a distinguished celeb at her school. The school published a big
photo of them both on their site, using her full name. Being mindful of
privacy issues, I requested that the school just remove her surname from the
story. They were most apologetic, and did so straight away.

Acquaintance of mine was near as dammit arrested for taking a photo of his
child on a roundabout. Made the Daily Mail – here’s the link

The only valid reason for not taking photographs is that the photographer
may block the view for the other watchers but that can easily be dealt
with.

A whole climate of fear and pseudo-law has been created over photography
nowadays. This is reinforced by the TV news that more and more only shows
scenes of grey-blob-headed people or, if children, from the waist down.

Spot on! It’s also the reason for the fear and hatred that the state shows
to home-schooling.