It wasnât Howard Flightâs âfirstâ acknowledged gaffe â that was his statement in 2005 that an incoming Conservative government would make deeper cuts than those publicly announced. Michael Howard removed him as a Conservative candidate for that transgression.

His latest alleged âgaffeâ was to say that:

âWeâre going to have a system where the middle classes are discouraged from breeding because itâs jolly expensive, but for those on benefit there is every incentiveâ.

Labour howled with outrage, the cry of âEugenicsâ went up, even the trade Unions became involved with TUC secretary Brendan Barber branding Flight âan insensitive throwback to the worst of 1980s politicsâ.

It was that word âthrowbackâ that made me sit up and take notice â for I happened at the time to be reading some background material on the original Mental Incapacity Bill â circa 1912. Regular readers will know of my obsession with the current Mental Capacity Act, and understand that I consider this sort of reading to be recreational!

If you want to know about eugenics, then I recommend ploughing your way through the Hansard record of the debates leading up to that Bill â in particular the âFeeble Minded Personâs Control Billâ â you will need a strong stomach.

You see the unpalatable truth is that Flightâs comments on âbreedingâ were a throwback â but not to Tory policies, but to early Labour policies and politicians whose language would make you wince:

There is only one fitting description; they are almost like human vermin. They crawl about, doing absolutely nothing, except polluting and corrupting everything they touch. We talk about the liberty of the subject. What nonsense! What waste of words! We ask that you should take these people and have proper control over them, because they have no control over themselves. They are verminous, dirty, with no idea of washing or cleansing themselves. Yet they are human beings, and you could, under proper control, so far improve them that they could be put to some employment, not enough to keep themâI never expect thatâbut sufficient to maintain themselves partly, and to give them a human existence which they have not got now. Above everything else, you would stop the supply of these childrenâa very important thing.

Yes, indeed â that was the Labour member for Woolwich Arsenal constituency railing against the Conservative member Gershom Stewartâs proposals for what we would now call the âunderclassâ. Labour were incensed at the idea of the feckless poor and âfeeble mindedâ being allowed to breed in uncontrolled fashion and wished them firmly locked away along with other âundesirable breedersâ, such as homosexuals and criminals â one and the same thing in those days.

The Mental Incapacity Act was passed and used to lock up and prevent further âbreedingâ by unmarried Mothers â the definition of incapacity was as loose then as it is today. It is the last Labour government which rewrote the Mental Capacity Act 2005 to allow women to be forcibly sterilised if so required under the additional provisions they gave the Court of Protection to dictate âwelfare requirements and medical treatmentâ.

Beveridge, the apparently revered Father of the Welfare State, wanted to suffer the unemployed:

âWith complete and permanent loss of all citizen rights â including not only the franchise but civil freedom and fatherhoodâ.

That does not distract, however, from the plain fact that flightâs words were actually true. We have two sources. The impeccably independent Institute for Fiscal Studies which concludes that:

The probability of having a birth increased by 1.3 percentage points among the low education group, equivalent to a 15 per cent increase. This equates to nearly 45,000 additional births.

And (hat tip to Burning Our Money):

Who published this graph showing the correlation between areas of high benefit dependency and higher than average births to unmarried Mothers. 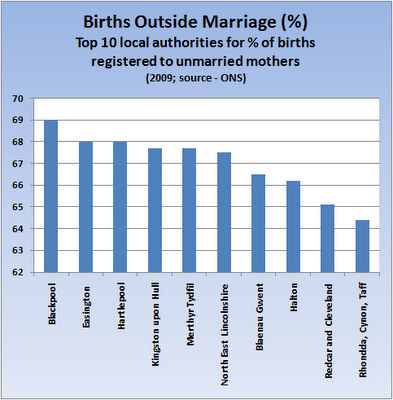 So â Flight spoke the truth, but the reality was that Cameron didnât want to be associated with any suggestion of a connection between his party members and Labourâs belief in the Eugenics movement.

A century ago eugenics had the degree of respectability in polite society
that the concept of anthropogenic global warming has to-day.

The terms âeco-naziâ and âeco-fascistâ habitually cast at environmentalists
might be closer to the mark than we thought.

Subjective judgement. Thatâs the problem. Same with classification of
people on any grounds. I mean would you want Princes Of The Realm who talk to
plants to be allowed to breed? What about Indian Mathematicians?

Were the offspring of transported Australians any worse than those they
left behind? Would Harold Shipman have been the perpetrator or the victim of a
eugenics program?

Rather like taxes. I think everyone who earns more than me should pay more
tax. Everyone who isnât in my Venn circle should be sterilised.

We have welfare to act as a safety net. Its not supposed to be a lifestyle
choice, but there is no perfect system. I think on balance its maybe better
the poor are not begging on every street corner. Besides. donât you think
natural selection would have selected out all the undesired traits already in
our perhaps 50,000 year existence? But hey, some not very bright girls are
still hot â and not all called Cheryl either.

Bloody Hell, when did this come back online!?!??!

Thatâll teach me to remove off GoogleReader. Was convinced you were gone
for good Anna.

Bless you and welcome back.

Weâve only been back a few weeks. Working hard to get our readers back.
Please pass on the news.

Eugenics is a truly appalling concept. And yet it is intellectually
compelling.
Before the Nazis demonised it irrevocably, it seemed a sensible
policy. It may return, when memories fade.

It should be debated, without rancour. Personally, I hope we can find a
damn good reason to permanently reject eugenics, without appealing to the
disgust factor or religion. Iâve got some thoughts on why itâs not the
adaptive strategy that it may appear to be, but it takes some lateral
thinking.

Try this proposition-
Most of the leaps of progress in our culture and
history, have come from people who would be considered unfit to breed, by the
average Daily Mail reader.

As desirable as it may appear, a concrete intellectual case for rejecting
eugenics without reference to religious considerations is a mareâs nest; it
canât be conveniently divorced from the religious mores that have
historically been part of the ethical structure of (whatâs left of) our
culture. The idea that every life is precious and of equal value lies at the
basis of so many peoplesâ values â whether Christian or not. By the same
token, the idea of eugenics (apart from its association with certain
highminded political theorists and Nazis) is repugnant to most. The likeness
of the Divine in us makes our values more humanitarian â not less. You canât
circumvent Christianity; itâs too big to avoid.

Our social welfare system seems to fly in the face of
darwinism.
Eventually, weâll end up with a population of welfare dependent
individuals with no one to support them. But of course in reality there comes
a tipping point in the relationship between parasites and their hosts, whereby
the parasites are forced to reduce their numbers to match the resources
available.

Thank goodness that one didnât catch on. I might never have been born.

And what would they have done for Cannon Fodder?

I agree that we are breeding ourselves towards extinction and that mental
standards seem to be rapidly declining, possibly because of it.

Itâs also worth pointing out that some of the leading Fabians earlier in
the 20th century (eg the Webbs and George Bernard Shaw) were very much in
favour of eugenics â and preventing the Great Unwashed from breeding. And I
understand that one of the early leading lights in that movement became the
leader of the Brownshirts..