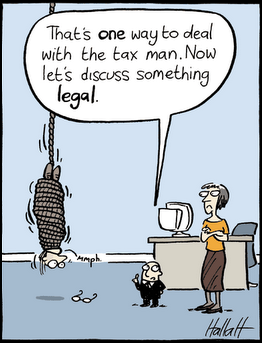 It’s all going to be so wonderful…Our brave new Coalition government is a government of movers and shakers. Yes Sirree! They are going to take the tax and benefit systems, and shake them by the scruff of the neck, so all the crap falls out, and make them fair!  Fair, do you hear?  So they will save billions from benefit scroungers, and billions from tax cheats, and billions from cutting HMRC’s staff, and cut the Holy Grail — sorry! — cut the deficit. But — and this is the important bit — there will be no losers.  Also every day will be the first day of Spring.

Much of this will be due to the introduction of RTI — Real-Time Information . This is a brand-new wheeze, dreamed up in some opium den by a taxman’s think-tank. But now, Cameron and Duncan-Smith will wave their wands and it will all come true. (Though obviously, if it goes wrong, it will be Cleggie’s fault).

Employers will have to make monthly , rather than annual returns to HMRC of employees’ payroll details. Hmmm… let’s see… that means twelve times as many returns, doesn’t it? Or possibly thirteen, if “monthly” means “four-weekly” as it often does. That’s a lot of extra work, isn’t it? Especially when you remember that the government is going to require the banks to give the taxman all the details of our bank accounts. My monthly statement sometimes goes to two whole pages . Times that by (say) twenty million…

Still, HMRC’s staff ought to be able to cope… even though they’re due to be cut by about 15% … that’s after having lost thousands of staff in the Brown years. And even though they already have a backlog of thousands of cases. And are two months behind dealing with letters. And are frightened to answer the phones. Not that morale is down, you understand. Well, not a lot. There haven’t been many suicides. Yet.

Still, they’ll be helped by the wonderful new computer systems being installed, mainly by a company called “Aspire“, with whom they spent £765 million in 2009/10. Aspire is a word meaning “Cross your fingers and hope”.

The systems at present running in HMRC and DWP are to be improved/merged/linked/collided (delete where applicable) so that the taxman can check that the earnings our employers put on their monthly returns is the same as the earnings we declare to DWP when we claim for all those benefits we’re on. Well, nothing’s going to go wrong there, is it?

After all, it’s completely simple and straight-forward. It’s not as if HMRC ever cocked anything up before. Apart, obviously, from the 1.9 million cases of underpaid tax from 2006/07 which only this week they decided to write off. Plus the millions of underpayments which they are currently harrassing the population about. And all the multiple Coding Notices their computer spewed out, causing chaos, confusion and concern to taxpayers already bamboozled by science. Oh! — and all the cheques giving refunds which bounced recently, and had to be re-presented while the red-faced taxmen cringed in embarrassment.

But that’s all in the past. From now on, the taxman is going to adopt a “customer-centric” approach. We are at the threshhold of a New Age. No more cock-ups. Not a single one. Ever.

And no tears before bedtime.

“From now on, the taxman is going to adopt a “customer-centric”
approach.”
And on whose behalf does HMRC act? For whom does HMRC provide a
service? It is these people who are HMRC’s customers, not the taxed. So, no
change there then.