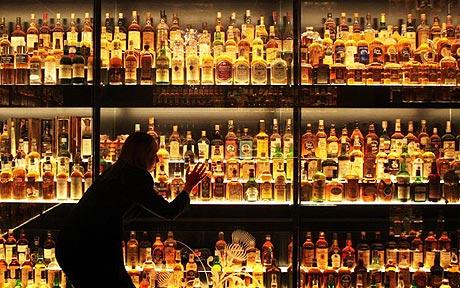 But having said that, I am very much in favour of efficiency and of finding innovative ways to do more and waste less. So I was quite thrilled to read this:

Edinburgh Napier University has developed a new biofuel made from whisky by-products.

Not only that, but:

The team focused on the whisky industry to develop biobutanol, the next generation of biofuel which gives 30% more output power than ethanol.

Itâs a win-win situation. Something that was just going to be poured down the drain winds up not only fuelling cars, but fuelling them better. Itâs not clear how much fuel this will actually make but itâs an inspiring way for people to start thinking about using waste in new and useful ways.

So I think tonight I might just raise a wee dram of Glenkinchie in their honour!

I think Iâve just fallen in love â¦â¦.
Can it come from a meeting of minds
with a common affinity for Lowland malts?
Take the Glenkinchie as a given,
my only difference would be a prediliction for things green purely on the
basis of:
a) make the world cleaner â pure

and Marmite is wonderful stuff! (One of lifeâs essentials â like
Glenkinchie)

Didnât realise it was Thaddeus rather than Anna â call it a meeting of
minds rather than love. (No prejudice, I just happen not to swing that
way).

My thought exactly, on Climate Change, and Waste.

The âPot aleâ at the moment is spread on grassland after removal of
dissolved metals and the âDraffâ is fed as an animal feed. Sadly a none
starter as they will end up spending more energy in collection from around the
various distilleries than the finished product will ever replace.

Not sure this is quite the good news story it appears. I was under the
impression you get very little butanol from ânormalâ fermentation. It would
most likely need a second go with different bugs.

Butanol may be a better fuel than ethanol, but it will still produce less
energy than regular petrol.

Iâll drink to that!
Gildas the Monk

Iâll drink to anything.

Yes, it is very similar in principle to the production of Marmite in taking
a waste product from the brewing industry and turning it into a higher value
product.

Hopefully the production costs will be low enough to turn this into
something profitable.

How anybody could eat that muck Iâll never know. If I had
invented/discovered it, it would never have seen the light of day, for as
soon as the vomiting from the first tasting session had ceased I would have
thought that it was clearly unfit for human consumption.

In my sorry experience, all whisky by-products except headaches, go down
the drain all too soon.
btw havenât horses been fed a barley mash mix
before?