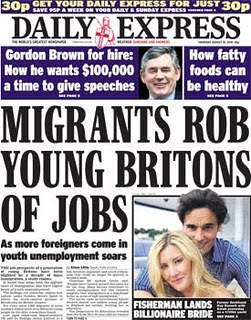 The front page of the Express today is a disgrace.

If we charitably assume that the partial justification for a newspaper is to inform its readers of news, then it fails dismally. If we take an alternative view and assume that its purpose is to provide a sympathetic ‘wrapping’ vehicle for its advertisers, then I wonder how firms like Tesco, Marks and Spencers, and Specsavers feel about being associated with such naked xenophobia?

“Now proff (sic – perhaps they could do with a migrant in the proof reading department!)that Immigrants have taken jobs of Britons”

Have the Express evidence that even one young Briton was ‘robbed’ of a job by a migrant? I very much doubt it. Have the Express evidence that an employer would prefer to employ someone with basic English at best, who is just finding their feet in a ‘foreign’ country, who is going to involve them in a host of paperwork to prove that they are legally entitled to work in the UK, over a home grown young person already established in the area? I very much doubt it.

In order for the Express headline to be anything other than xenophobic and designed to ‘generate an atmosphere of fear and hostility’ which is one of the criteria for upholding a complaint to the PCC, they would need to show that young people en masse are being turned down for these jobs in preference for migrants.

The real story, and the one that may not be appreciated by the Express’ readers, is that there is a correlation between areas where large numbers of young people have a disinclination to take on work which is boring, low paid and possibly inclement, either through laziness or through the effects of a welfare state enabling them not to do so, and those areas that migrants flock to, aware that there are jobs to be done, and wages – however lowly- to be earned.

I am the last person to support the mass migration that Labour’s lax border control has permitted, the island is groaning under the weight of too many people; many of those people are asylum seekers who are not entitled to work. Many are illegal immigrants, who work in the black economy. Indisputable facts.

The migrants that the Migrationwatch report refers to are those legally entitled to work here, mainly from Eastern European countries. There is an argument that this free movement should have been gradually introduced, one that I am sympathetic too.

However, it is hardly the fault of those who come here legally and are prepared to take on any kind of work, if the local youngsters – who were here first, as we are so often reminded – and have all the advantages that fluency in the language and ‘on the spot’ intelligence give you, didn’t have the wit to line up for those jobs first. To whine that they are being ‘robbed of jobs’ is a travesty.

There are many reasons why the locals don’t have those jobs, but ‘theft’ is not one of them.

I note that The Telegraph were far more honest in their reporting:

[Migrationwatch} could not say an influx of migrants caused high jobless rates; it said that across 50 local authorities outside London, an additional 1,000 immigrations meant a rise of youth unemployment of 900.

‘Migrants do the Work of Lazy Young Britons’ doesn’t quite have headline
status does it?

The ‘A’ level grade inflation might be improved by a proviso that it is
necessary to demonstrate a reasonable command of english language &
grammar before an ‘A’ or ‘A*’ grade may be awarded, regardless of the exam
subject.

In English, proper nouns should always be capitalised.

Spacing plays an important part too; especially between the final
word of a sentence and any punctuation one would wish to use.

It also says a lot about the state of our education.

Record ‘A’ level results yet again. Whilst we slip further down the
international academic tables.

the thing is that right now the “state” takes money from me by force, and
then hands it to someone who will not work. In the process they cream off some
of my money to pay for the administration of said theft. Oh – and also pay for
the administration of a system to bring other folks into the country, who will
do jobs that, but for aforementioned theft and redistribution, would be done
by folk already here.

(And the reduction in my income by said theft means I am not supporting my
family in their endeavours, nor spending money in the local retailers etc and
so forth……)

Sure – you can’t prove a specific job was “stolen” by an immigrant – but
FFS it’s a headline – not a fucking disertation!

Does anyone seriously think that a massive reduction in welfare payments
would not result in higher employment rates in the indigenous population?

Maybe the editor is better at sniffing the political air than all of
you.

With my very brief knowledge of the ‘Express’ I am amazed to learn from
this post that it has a fucking editor!

Jim,
What’s not to like? Er, nothing, Lord Copper. It would be sensible
to actually use the time available to help the claimants become more job
ready, otherwise they would just be warehoused. Unfortunately, such investment
in people costs money, nowadays paid to private sector companies who get
bonuses when their clients sign off. How long those jobs last, even for the
hardest working, is another topic. I hope you are not aware of the facts but
people claiming Jobseekers Allowance have to demonstrate that they have been
looking for work – it’s part of their jobseeker’s agreement that they look for
work in return for JSA.
As a former Personal Advisor in a JobCentre I
reckon Ian Duncan Smith has the right ideas for reforming benefits. He starts
by valueing people for themselves and not what they cost or contribute. After
all, on a cost/benefit basis, the banking and finance industry should be in
dogmeat tins.

All of you grow up. Look who owns the fucking comic.

@Jiks: I think it is vital that some form of workfare is introduced into
this country. I agree with you that to allocate benefit claimants to private
firms would be pointless – they would cause more trouble than they were worth.
Companies would sign them in and tell them to b*gger off for the day.

Instead we need a system whereby all benefit claimants (including those on
incapacity/invalidity benefits (assuming they are not completely
incapacitated)) are required to attend something, daily, for the usual office
hours. What we get them to do is open to question. Dig holes and fill them in
again if necessary. But there should not be the option to sit on your @rse all
day, just turning up to collect your giro.

Not least because it would catch out all those working on the shy, all
those who are so lazy/feckless that they couldn’t even manage that. No turning
up, no money. Make claiming tax payers cash more of a hassle. Not in the way
of more forms, complicated regulations for who qualifies etc, just physically
difficult.

In fact make the whole system simple. Turn up for day 1, do your 8 hours
get

In Britain we already knew that of course. The workhouse provided clean
living, but it was strict. For the average person private toil was better
than public provision.

Before anyone says “that’s slavery!!111″ it’s not as there is no
obligation to do it.

Absolutely. But it would be the only way of getting cash from the
State.

Well said Anna, could not have put it better myself. I know this is true as
I just tried over at AP…

EV – in principle I can’t argue with you on the no work/no free money part.
In practice though, think of the poor firms required to deal with the workshy
foisted upon them. Why should manufacturing firm A lose its contract to supply
firm B due to late/shoddy work caused by being forced to employ a mass of
these numpties who really do not want to work? Currently the hard working,
well educated, polite and *gasp* clean east europeans are the best assets of
many private sector firms in this country I suspect.

Simple answer – you want a high speed rail link then use the unemployed
to do the grunt work. They could also be employed in digging the trenches
for the high speed fibre optic cable network.

That should also solve the problem of the dole scroungers getting too
fat.

It seems utterly ridiculous to me to have millions of people on the dole,
paid to do nothing, whilst the Gov is simultaneously claiming that a lack of
available labour is adequate justification for unfettered immigration.

The unemployed should be allocated a job or trained to do a job for which
there is an obvious need (nursing, for example); those that refuse lose all
benefits.

William The Bastard came over from Normandy and took Harold Godwinson’s
job. There’s proof of it all in Bayeux.
I like the choice of leg and breast
meat (I bone the leg and cook it separately from the crown to keep every bite
juicy and tender) that Turkey offers.

Actually I can summaries the above, what I like about Turkey: There is no
sense of unjustified entitlement.