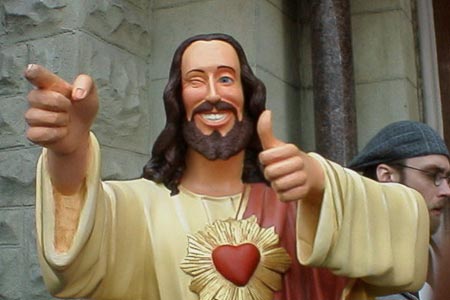 Buddy Christ – from the film ‘Dogma’.

I am a great fan of “Dogma”.  The film, that is, which itself is based on a witty and potentially irreverent view of catholic teaching.

The plot turns upon what, in olden days, we might have called a “conceit”: the idea that two fallen angels, by obtaining forgiveness for their sins, would thereby prove God wrong – and in proving God wrong, would unmake the whole of existence. What a beautiful thought.

And so we pass from the sublime to the ridiculous: from matters divine, to the Department of Work and Pensions (DWP).

A ruling about marriage and pensions, already covered seriously in Pink News, and with a certain degree of twinkling amusement in these columns looks like it could be on the verge of unmaking the carefully constructed edifice that passes for marriage and civil partnership in the UK today.  The principle is simple: if you are man and woman, you may be married.

If you are man and man or woman and woman, you may be civilly partnered.  There is very little difference between a marriage and a civil partnership beyond the fact that the former (usually) contains some element of religious symbolism – and the latter does not.

Since religion and state are mostly separate in the UK, government bent to religious wishes, and decreed, in inventing this new union that civil partnership is not marriage and marriage is not civil partnership – and what government has put asunder, let no man ever join.  Unfortunately, this difference in rights – marriage for the straights, civil partnering for gays and lesbians – has been a sore point ever since the Civil Partnership Act became law in November 2004.

Nonetheless, successive Ministers (both religious and secular) have held the line.  They have even managed to fit the transgendered into their neat church-state division, as by virtue of the Gender Recognition Act 2004, an individual who has undergone gender re-assignment may obtain legal recognition of their assigned gender after they have satisfied a Gender Recognition Panel of their bona fides.

The bon fid’s, in this instance, require absolutely that a trans man or woman obtain a decree of nullity in respect of any pre-existing marriage before they receive their certificate.  This little bit of home-breaking fits neatly with EU Rules (Council Directive 79/7/EC, if you are interested) since it sets out a clear path by which a gender re-assigned person can obtain the rights and privileges due to his or her gender.

Not so prior to 2004, when an absence of any means for an individual to obtain gender recognition led to defeat for the UK in the European Court of Human Rights (the Richards case).  “No rules” was effectively discrimination against the transgendered: individuals who had undergone gender re-assignment prior to 2004 were therefore entitled to receive the privileges that they were entitled to by virtue of their assigned gender.  Including pension.

Which brings us full circle to the case of Christine Timbrell.  She underwent gender re-assignment surgery in October 2000 – a year before she turned 60.  The DWP initially turned down her application for a pension from 2001 because, they argued, she was not legally a woman.

Later still, they claimed, because the Gender Recognition Act required an individual to divorce before the re-assigned gender could be acknowledged, she still didn’t count as a woman for pension purposes.

Not so, ruled the court of appeal last month.  According to Lord Justice Aikens, The GRA could not operate retrospectively: and not granting Ms Timbrell her pension in 2001 was discrimination.  The DWP were wrong to deny her her right to a pension “as a woman as from her 60th birthday”.

Wait a minute!  Run that past me one more time: she was denied her right “as a woman” from her 60th birthday.  So if, legally, she was entitled to be treated as a woman in 2001 and she and her partner are still happily married, then…

No.  Surely not.  But it does look exceptionally like it.

Ms Timbrell appears to be that impossibility, according to conventional political thinking: a married lesbian.

A slightly po-faced comment came winging over from the Ministry of Justice.  A  spokesman said: “The judgment of the Court of Appeal is not about marriage law, nor is it about requirements within the Gender Recognition Act 2004 regarding the ending of a marriage or civil partnership.”

Well, no.  The judgment is not about marriage law.  But the law does not fit into neat little categories.

Precedent in one sphere leaks over to another.  And so it seems here.

Absent some further miracle of legal hair-splitting, same sex marriage has already arrived in the UK.  The absolute distinction between civil partnership and marriage is starting to unravel.  So far, no-one seems to have noticed.

Thanks Gloria… have added that to my list of dirty limericks! Hadn’t heard
it before.

Demetrius is right… that old element of simplicity has been removed, and
now we are in la-la land, where hairs can be split and re-split into finer and
finer filaments.

There was a young man from Khartoum,
Took a lesbian up to his
room.
They argued all night
Over who had the right
To do what, and
with what, and to whom.

I’ve never cared a flying f*ck about who f*cks whom, but all this agitation
over who has rights… this way lies madness.

Er… this legislation… nothing in there about goats, was there?

Two ugly young ladies from Fordham
Went out for a walk ’til it bored
‘em
And on the way back
A sex-maniac
Jumped out from a hedge and
ignored ‘em.

Literally, an unholy mess. Marriage has always had its complications, but
limiting it to adult men and women joining on a lifetime basis gave it an
element of simplicity, notably in matters related to child rearing and
probate. Nobody has yet seen the ultimate consequence of this shambles and
that is to ignore all forms of partnership and make all benefits, rights etc.
purely individual. So as far as the State is concerned all forms of
marriage/partnership are purely civil contract arrangements. If there are some
who see personal unions in the context of a religion then that is just another
option.

I think that would be a very good idea. The state should ignore , and
should take no part in the formation of, expressions of personal commitment.
If a partnership breaks up, the important issues – the welfare of any
children, and the division of property – are the same whether or not there
has been a formal expression of commitment. (Thus if a married couple have
always kept their finances separate, and there are no children, there should
be no more need for a divorce settlement than there is when boyfriends and
girlfriends (in any combination) who have not pooled their resources split
up.)

Social security benefits could still take account of the pooling of
resources, as they do now. You could identify couples who were living
together as spouses/civil partners and adjust benefit levels accordingly.
The important thing would be the facts of the arrangement, not the presence
or absence of a piece of paper.

Demetrius, Richard,
Excellent points. Marriage/civil partnerships
also enable inheritance tax to be avoided. Compare that perk with the
situation of, say, two spinsters who have shared a home, possibly for
longer than most marriages. On the death of one sister the survivor may be
liable for 40% inheritance tax of the other’s estate requiring the home to
be sold. Deciding what happens to a house on the basis of what happens in
the bedroom is not logical. It does not treat people equally and is
wrong.

And let us have a little think about what this might do to the ‘no such
thing as common law marriages’ meme?

where will it end?