My attention was drawn to an article in the Spectator, well, not so much an article as a graph, really: 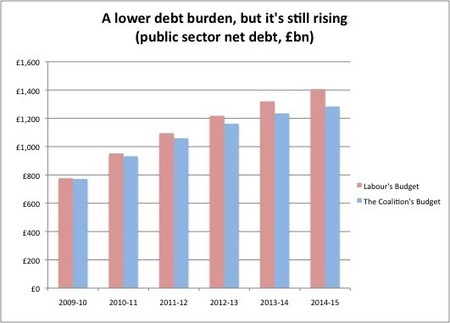 And what does this graph show us? Well, the red bars are what the debt would have been if Labour had won the election and the blue bars are what the debt will be under the coalition. For all the sanctimonious talk of âfiscal consolidationâ, the true state of the governmentâs spending plans become apparent. There is no intention of reining in the runaway horse that is government spending.

The plan to conquer the deficit is a bagatelle, all that is going to do is reduce interest payments, itâs going to do nearly nothing to slow down the juggernaut of state spending.

The first thing that should worry you is that of course, ha! ha! the government doesnât actually have any money of its own, ha! ha! No, all that debt means that every man, woman and child in the UK today is on the hook for approximately Â£16,000 . And if that doesnât make you giggle nervously, then ha! ha! well, I have to point out that of course not every one of those people is economically active and that ha! ha! only about a quarter of those people actually work, meaning that if you are a tax-payer, well, ha! ha! youâre on the hook to the tune of Â£64,000.

And at some point, those debts are going to have to be settled. But because the state is addicted to spending, there is going to be precious little of that.

Faced with a situation like this, the government would be well advised to take a different position by asking what the state absolutely essentially has to provide. They should restructure the government to do these things and simply dismantle the rest.

We are not all feeling the same pain here, despite what Mr Osborne says and despite the bleating of the progressive commentariat. There are allegedly 15 million people officially gainfully employed in the UK. 6 million of these are employed by the state, these 6 million are a nett drain on the economy, because even if they are providing useful services (which is by no means always the case!) they are still not as efficient as the private sector in delivering those services. If we removed the burden of paying for even half of those people from the 9 million who actually generate wealth, it would be like lifting an enormous yoke from the shoulders of those who are productive. And even if those people were immediately just placed on the dole, it would still be a nett gain, because they wouldnât cost the people who generate wealth as much money and the government would have to scale back the regulation and red tape that frustrates so much of life.

Furthermore, Iâm convinced that there are many people stuck in the rut of a depressing, soulless public sector job who simply need a rocket up the rear to get out there and follow their dreams.

And finally, what about all the âservicesâ that would be destroyed? Well, if there is a genuine need for those services, then commercial enterprises could step in to provide them more cost-effectively and more innovatively than the state can. And people with experience in those area may well find themselves in demand for delivering the services. And if there is no genuine need for those services, well, then weâre all better off without them, arenât we?

Itâs time to be a lot braver than the coalition appears to be.

No matter how often you see the debt figures, they never fail to send a
shiver up my spine.

Well, Mr Wilson, I wasnât going to read past your, âAt some point, these
debts are going to have to be settled.â Why? because they will not have to be
settled, simply brought into back into proportion.

Unhappily, I did read on. Perhaps youâd best look again at your âgainfulâ
employment statistics.

Will this affect my Pension in the long term?

O Dear, silly me. I think it already has.

The Libertarian Answer is to shoot the horse.

Another excellent piece, TJW. But even if our politicians had ever learned
to listen to the strange noises originating outside their own skulls, they
would remain powerless to change anything. Jonathan Lynn and Antony Jay wrote
the comedy series âYes Ministerâ and âYes Prime Minister.â Like most effective
comedy, and this was super-effective comedy, it mirrored real life. Or in this
case, the distortion of real life that is Westminster/Whitehall. It
demonstrated that for all a policianâs ego, cunning, and rare altruistic
impulses, all the real power is held in the upper reaches of the real ruling
classes, the Civil Service. Unelected to a man(darin), they can be relied upon
to ensure that whatever happens, or more usually, doesnât happen, will be for
the benefit of the country. I.E. themselves. And making any cuts at all within
the bureaucracy would be anathema to them.

âAnd finally, what about all the